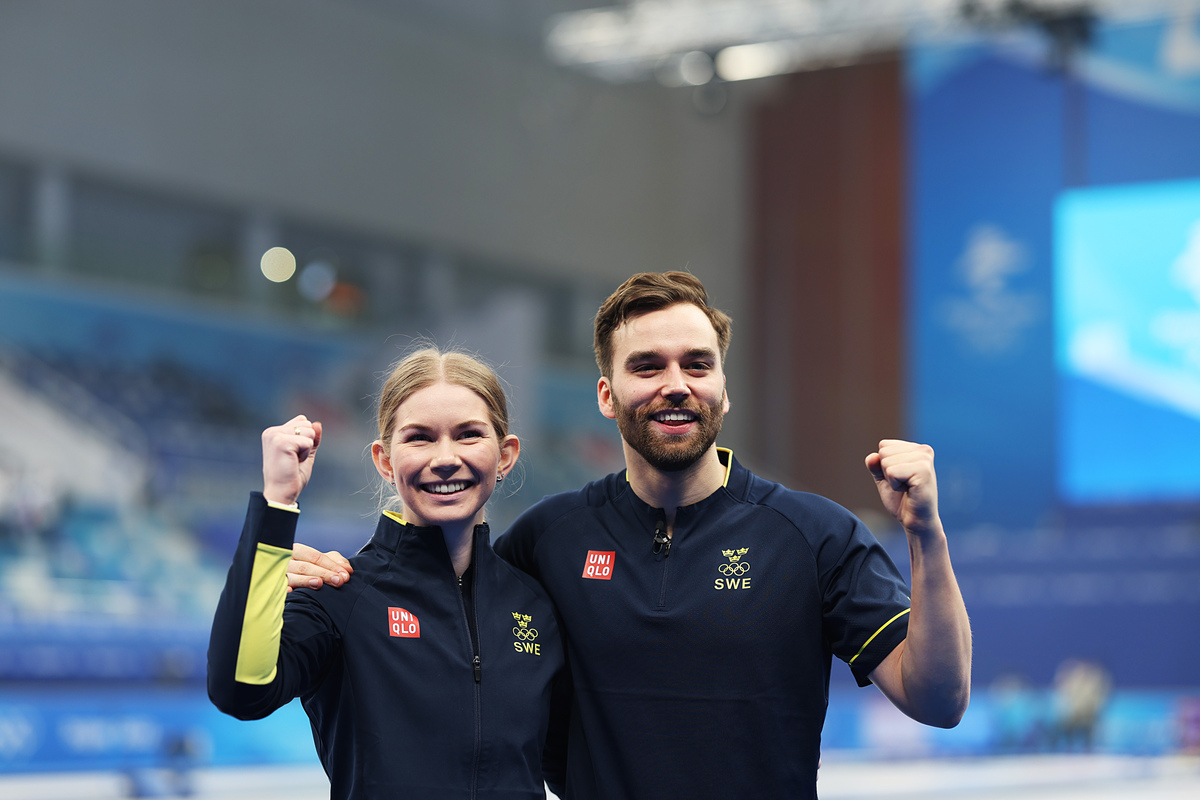 Sweden were 9-3 winners of Tuesday afternoon’s Bronze Medal game against Great Britain, a victory carved out by a devastating mid-game burst of scoring that saw them take points from four successive ends.

Having finished third — and above Sweden — in the round-robin rankings, Britain started with last-stone advantage.

In the first end, their female player, Jennifer Dodds, had to settle for just one point from a stone already lying in the house when she got the angles wrong on her attempted shot for two.

In the second end, Sweden’s male player Oskar Eriksson managed to open up a tight cluster with his last stone. Dodds then cleared out most of them but left Sweden still lying shot when Almida de Val came to play the last stone of the end.

She completed a double take-out, removing the second British stone off the wing, to score four points and take an early lead — at 4-1 — that Sweden were never to lose.

In the third end, Dodds was facing two Swedish counters when she came to play her last, but again her angles were wrong, and Britain gave up a steal of three.

At this point, Sweden were leading by 7-1.

Problems grew for Britain in the fourth end when Dodds’ final stone of the end caught a front guard to give Sweden another steal, for one point this time.

The teams went into the break with an 8-1 score in favour of Sweden.

In the fifth end, Britain were looking good to score as Dodds played a double take-out on Swedish stones. However, her second target stone jammed on the way out, yielding yet another single-point steal for Sweden, who moved onto a 9-1 lead.

Britain finally got back onto the scoreboard in the sixth end when Dodds drew her stone into position to score two points, and reduce Sweden’s lead to 9-3.

But this was too little too late, and the British duo then conceded defeat, and Sweden claimed the bronze medals.

After the game an elated Swedish duo spoke, with Eriksson paying tribute to the 100% performance by his partner, saying “That was amazing! Our goal coming here to the Olympics was to win a medal. Yeah, it was an incredible game by us today and Almida was shooting 100%. So I’m really proud of her and our game today.”

De Val explained further, saying, “This was our last chance, our last game, so we had nothing more to lose — just go out there and play the best we can. We both know that it’s a lot more fun going home with a medal than without so that really motivated us to really fight for this game.”

Meanwhile the Great Britain duo were magnanimous about their opponents. Bruce Mouat said, “The big difference was that some of the shots the Swedes played were unbelievable, really well done today.” He added, “We are obviously quite disappointed. We’re just going to have to try and get over it as quickly as possible, but it might take us a few days.”

Reflecting more generally, Jennifer Dodds added, “Just being at our first Olympics, that’s something I’m always going to treasure, the feeling of stepping on the ice for the first time, in our first game, is a moment I’m never going to forget.”