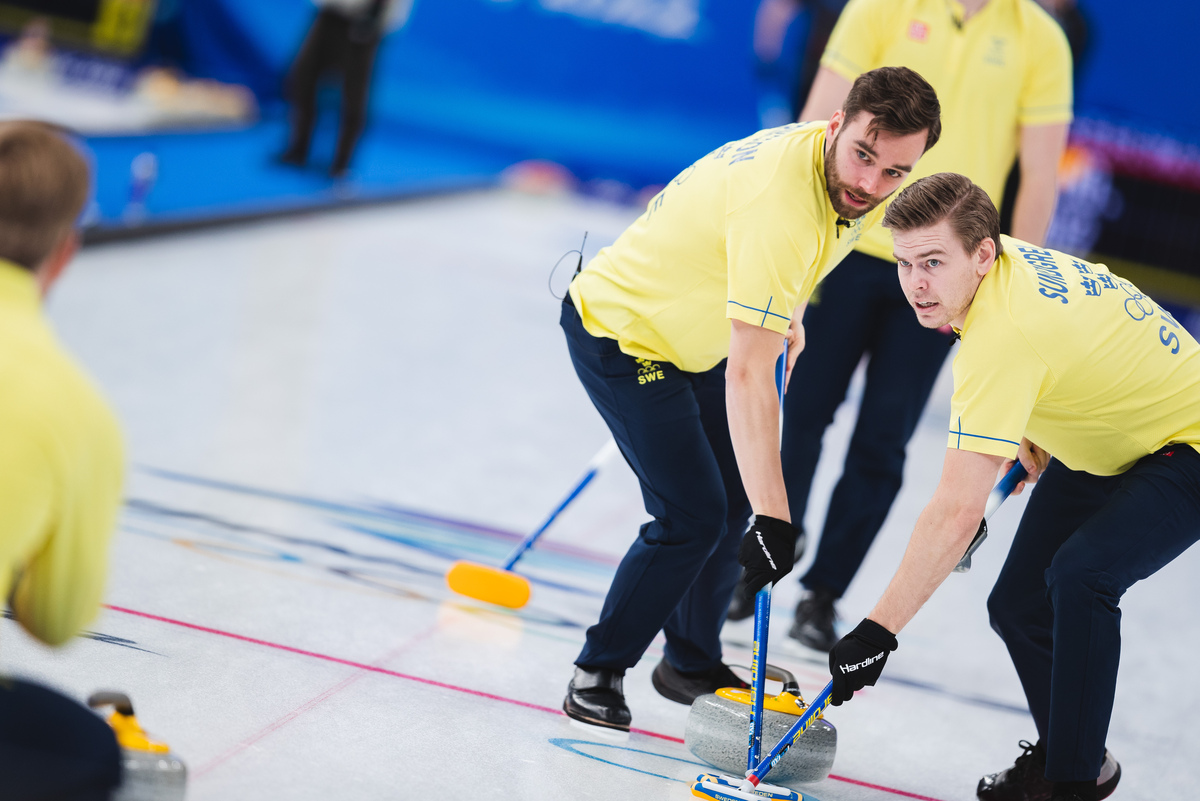 They were taken all the way to an extra end, but eventually a confident nose-hit by skip Mikkel Krause for the crucial final point gave Denmark a 6-5 victory over Norway for their first win so far, in Monday afternoon’s eighth men’s round-robin session.

The other session winners were leaders Sweden, second-placed Great Britain and third-placed Canada.

Denmark opened the scoring against Norway with a single point in the first end and the Norwegians then levelled in the second.

The Danes led by 2-1 when, in the fifth end, Norway skip Steffen Walstad had a miss on a take-out attempt, to give Denmark a steal of one and a 3-1 lead at the break.

Norway responded straightaway when skip Walstad played a hit for two points to level the game at 3-3 in the sixth end.

After this, the teams swapped single-point scores and, when Walstad hit for one and 5-5 in the tenth end, an extra end was needed.

In that end, Krause was facing two Norway counters when he came to play the last stone.

He had to wait for some technical work on his final stone before coolly delivering a nose-hit for the one point that gave his team their victory.

After this win, a pleased Danish second player Henrik Holtermann said, “It felt great today that we got our first win. It was very long time coming. We have been looking forward to it for a long time and we haven’t really performed like we wanted to, and as we know we can, so getting that first win was really good.”

Sweden were still unbeaten when they faced ROC in this session and their perfect record secured them the first spot in the semi-final.

The Swedes took a 4-1 lead into the break after ROC skip Sergei Glukhov came up short with his final draw and gave Sweden a steal of one in the fifth end.

ROC scored twos in both the sixth and eighth ends to reduce the Swedish lead to 6-5 after eight ends. Then, after blanking the ninth, Sweden skip Niklas Edin played a draw for one point in the tenth and a 7-5 win.

This was a sixth win for the unbeaten table-toppers.

Great Britain’s 6-5 win over Switzerland put them into a clear second place behind Sweden, on five wins and one loss.

British skip Bruce Mouat made the first breakthrough in the game, with a draw for two points in the fourth end, and a 3-1 lead.

Switzerland then scored one in the fifth. Mouat caught a front guard with his final stone of the sixth, to give Switzerland a steal of one that tied the game at 3-3.

The game was level again in the tenth end, at 5-5.

With his second stone, Mouat cleared out his own stone as well as a Swiss stone frozen onto it, to score one and take the 6-5 win.

After this win, Britain’s third player Grant Hardie said, “We knew the importance of that game, so we’re relieved. It was a massive game for the standings, and also against a great team, so we’re delighted to come out on top.”

He added, “The talk at the fifth-end break was make sure we score on the even ends and obviously that steal [in the sixth end] doesn’t go to the game-plan. We had to re-group there and it could have gone either way. Thankfully, Bruce made the winning shot in ten — he’s looking really comfortable out there.”

Canada faced Italy in the fourth game of this session. This was another tight game till the half-way point, with the score tied at 2-2.

In the sixth end, Canada nudged ahead with a score of two for a 4-2 lead.

Italy could only score a single point in the eighth end, and a further three points for Canada in the ninth — to take the score-line to 7-3 in their favour — were enough to persuade Italy to concede.

Speaking later, Canada second Brett Gallant said “We were playing a little bit sharper in the last two games than we were in the first few. We just took advantage of the couple of opportunities they gave us, but it was a pretty well-curled game by both teams. We’re feeling a lot better today than we were a couple of days ago.”

This win, and the losses for both ROC and Switzerland gives Canada a clear third place on the table.