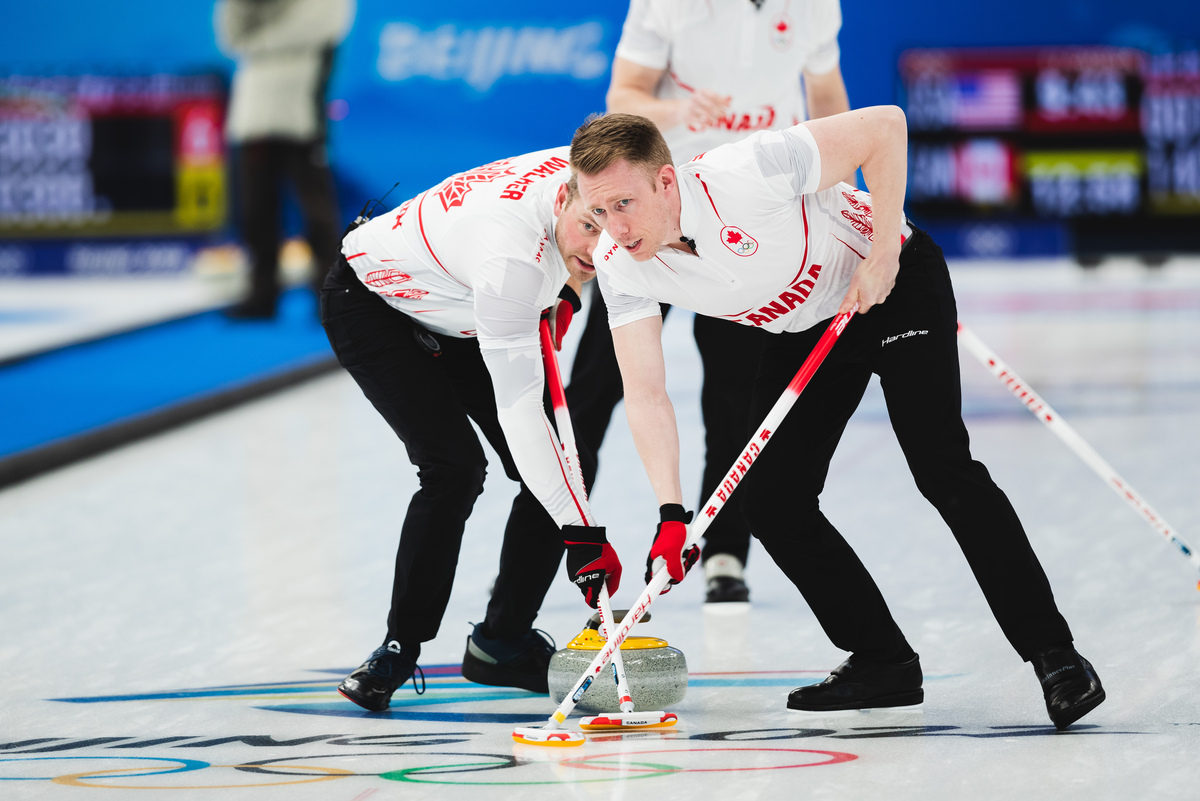 However, patience paid off for the Swedes as they retained their unbeaten record at the top of the table, with a last-stone steal of two for a 6-4 win over Norway.

Canada faced United States in this session and opened strongly, scoring one in the first end and then stealing four in the second when American skip John Shuster got an attempted take-out wrong.

A further steal of one in the fifth gave Canada a 7-1 lead at the break.

Both teams brought on their alternates at the fifth end to play lead – Marc Kennedy for Canada and Colin Hufman for the Americans.

United States had a brief revival, scoring three in the sixth end to reduce the Canadian lead to 7-4. However, eventually, Canada skip Brad Gushue played a hit to score two in the ninth end to complete a 10-5 win.

After the game, Canada alternate Kennedy expressed his surprise at getting onto the ice, “It was fun. It’s an incredible opportunity for me to be here with these guys, you know I had no expectations of playing, so the opportunity to get more than one end was fantastic, I loved every minute of it.”

Great Britain were up against China and, after China opened the scoring with a single point in the first end, Britain moved into a clear lead with four points in the second.

Then, with a lead of 4-3, Britain blanked the fifth, sixth and seventh ends before scoring three in the eighth when China’s Ma Xiuyue had a miss on a take-out attempt, leaving Britain’s Bruce Mouat with an open draw for a 7-3 lead.

Britain held a 7-4 lead as the teams played the tenth, and Mouat was content to peel off China guards throughout this end until he effectively ran his opponents out of stones. Britain recorded their third win so far, at 7-6, and join Switzerland — who sat out this session — in second place on the rankings.

Speaking afterwards, Great Britain lead Hammy McMillan said, “The four in the second end gave us some breathing room and we were able to get in front of the game. We’re quite happy with where we’re sitting right now, but we have a tough finish — we’re looking forward to it though.”

In the game between ROC and Italy, after a blank opening end, the teams swapped scores of three twice, to go into the fifth-end break level, at 6-6.

ROC blanked again, in the sixth end. Then, in the seventh, their skip Sergei Glukhov scored one point with a hit, for a 7-6 lead.

Italy’s Joel Retornaz then played a draw for one in the eighth end to level the game again, at 7-7. However, another score of three by ROC in the ninth was enough to give them a 10-7 win.

After this victory, ROC skip Glukhov said, “We are feeling really good because that was one of the key games for us. It is really important for us to feel confident, and we’ll just try to keep our emotions and concentration for the future games.”

He added, “We’re trying not to have any expectations, we’re just trying to play every game the same. I don’t even know against which team we’ll play tonight.”

The fourth game of this session was between unbeaten table-toppers Sweden and Norway.

After a single steal in the fourth end, Norway held a 2-1 lead.

They built on this in the sixth end when an umpire’s measure gave them another single steal, for 3-1.

When the teams played the tenth end, they were level at 4-4. With the last stone of the game, Norway skip Steffen Walstad just feathered his take-out target, leaving two Swedish stones counting for a 6-4 Sweden win.

On the table, Sweden now have five wins, while Great Britain and Switzerland share a won three lost one record in second place.

Canada and ROC share fourth, on three wins and two losses, while, at the foot, Denmark and Italy are still looking for their first wins.