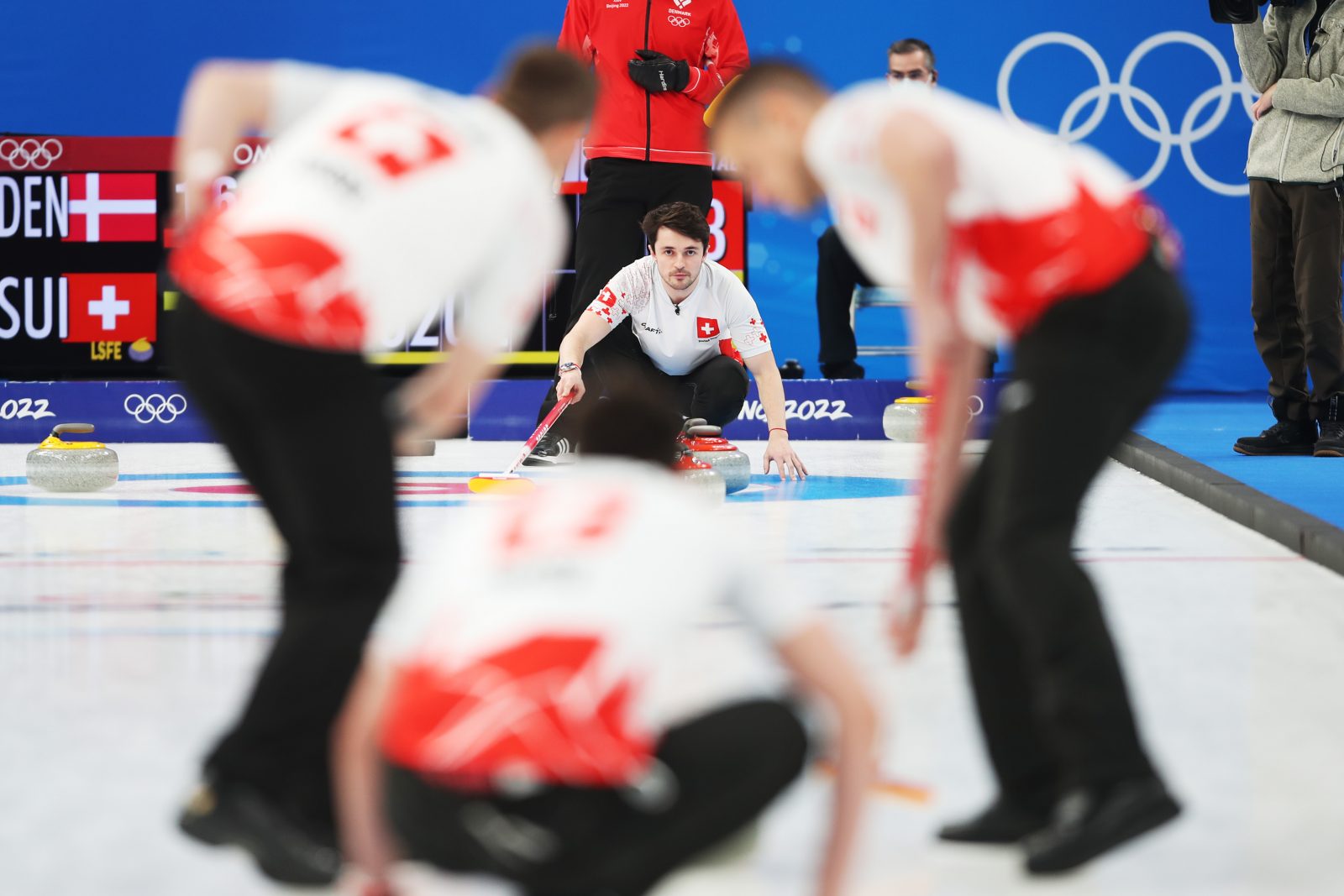 In an intriguing fifth session of men’s round-robin play on Saturday afternoon, in which every game went to the last stone, Switzerland beat Denmark by 8-6 to move into second place in the rankings.

Not to be outdone, table-toppers Sweden had a 7-4 win over Canada for a fourth win that retains their unbeaten record, while China were 12-9 winners over Italy, and Norway beat United States by 7-6.

Switzerland started well against Denmark, scoring two in the first end, and adding a further two points in the third to take an early 4-1 lead.

Denmark responded in the fourth end when their skip Mikkel Krause drew his second stone onto the face of another Danish stone already counting, to score two and reduce Switzerland’s lead to 4-3. Switzerland scored two points again in the fifth end for a 6-3 lead and in the sixth, with Switzerland lying three, Krause produced a nose-hit to rescue the situation, but could only score one point.

In the eighth end, Switzerland was still up 6-4, but they were looking good for a multiple score. However, Swiss fourth player Benoit Schwarz was too straight with his attempted hit and could only score one, moving Switzerland’s lead to 7-4.

Denmark scored two in the ninth to reduce Switzerland’s lead, but Schwarz was able to play a draw for one in the tenth to give his team their third win so far, by 8-6.

Afterwards, Switzerland’s third player Sven Michel said, “It’s so such a tough field, you have to play great against everybody and you have to be focused from the start to the end.”  Reflecting on his team’s second place on the table, he said, “It’s still very early. It’s not even halfway through the round robin. But it’s nice to get three wins in a row. We enjoyed the moment but tomorrow we’ll be focused again.”

Against Canada, Sweden blanked the first end and opened the scoring with a single point in the second end. Canada’s Brad Gushue made amends in the fifth end with a draw for two that levelled the score at 2-2 at the break.

Sweden split the house early in the sixth end and this eventually allowed their skip Niklas Edin to draw for two and a 4-2 advantage. In the seventh, Canada’s Gushue had an attempted triple take-out but once again, he left a Swedish stone sitting in scoring position, for another single steal to make the score 5-2.

A failed take-out by the Canadians in the tenth gave Sweden another single steal and a 7-4 win, to stay on top of the rankings.

Afterwards, Sweden’s Edin said, “That was a very solid game. We felt that game was the first real test towards our goal to go all the way. They are one of the few teams to have won the Olympics and to now come back. It was a very tough game on paper, and it was a tough game out there as well, but I felt that we had the upper hand most of the way and we’re really happy we got the win there.”

Norway faced United States in this session and the teams were tied at 2-2 when, in the fourth end, United States skip John Shuster sprung one of his stones out of a cluster in the house to score one and take a 3-2 lead. Norway scored two in the fifth end and then took a 6-3 lead with a steal of two when Shuster’s draw could not get inside two of four Norwegian counting stones.

In the tenth, with Norway leading by 7-5, Shuster could not find a way to score two in a crowded house, having to settle for just one as Norway won by 7-6.

Speaking about the crucial tenth end, Norway’s third player Torger Nergaard said, “We were happy to give away two, but wanted to avoid giving him a three – we would have hammer in the extra end.  We managed in the end, but there were a couple of pressure shots, we were a bit lucky that we got away with it.”

China faced Italy in the fourth game of this session and thanks to scores of three in each of the third, fifth and eighth ends, emerged as 12-9 winners. This result leaves then in joint fourth place, on two wins and two losses, alongside Canada, Norway and ROC, while Italy – like Denmark – are still looking for their first win.