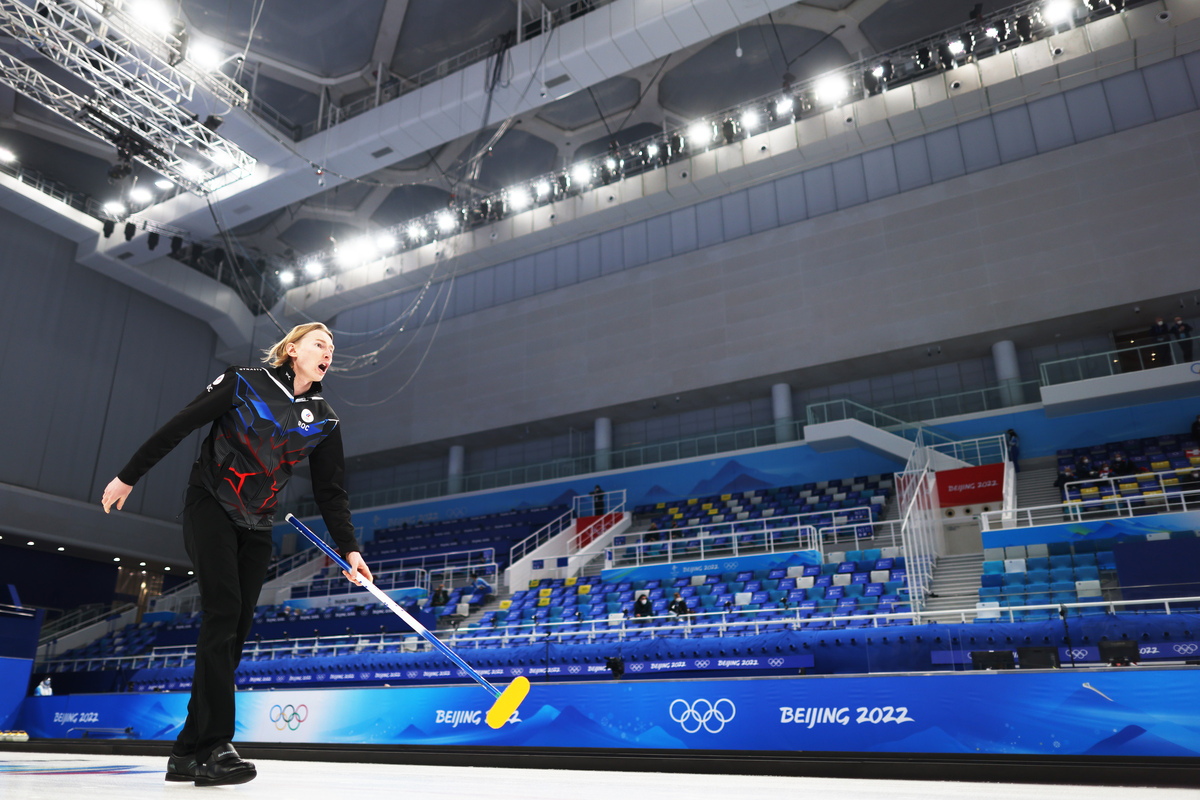 Table-toppers Sweden sat out Friday evening’s fourth men’s round-robin session and the three teams who did play — ROC, Great Britain and Switzerland — took advantage to close the gap on them with victories.

ROC were up against Denmark, and moved into a 2-0 lead in the second end.

Denmark scored one point in the third end to close the gap to a single point.

Then, in the fourth, ROC’s skip Sergei Glukhov played a perfectly-judged delicate draw onto the button to score another two points and move onto a 4-1 lead.

However, the roof fell in on the Danes in the fifth end when their skip Mikkel Krause missed a double take-out attempt and ROC stole six points to take a 10-1 lead into the break.

The shocked Danes came out for the second half, scored one point in the sixth, and promptly conceded the game, with ROC winning by 10-2.

Afterwards, Glukhov said, “We certainly feel better than after this morning. It was a close game until the fifth end, but in the fifth, Denmark made some big mistakes, and it just gave us six points. We had a lot of stones in the house and Denmark were left with a difficult shot. Scoring six is very rare, it maybe happened once in my career, stealing six. Denmark made three rough mistakes one after the other, like a snowball. We were just lucky.”

Great Britain faced Norway in this session, and the teams swapped single-point scores in the first two ends.

In the third, Britain’s Bruce Mouat played round a front guard and tapped out a Norway stone to score two for a 3-1 lead.

In the fourth end, Britain had a stone on the button, well-covered and guarded, forcing Norway’s Steffen Walstad to attempt to come in off a winger.

However, the angles were wrong and when the stones settled, Britain had a steal of two for a 5-1 lead.

In the fifth end, Walstad played a nose-hit for one point to give Britain a 5-2 lead at the break.

The British team continued their good work with a score of three in the sixth, and when Norway could only score one point in the seventh, they conceded the game, with Britain winning by 8-3.

After this second win for Britain, third player Grant Hardie, said, “We had to work hard for it from the start, especially after this morning’s poor performance. We wanted to get hammer for a change and draw a lot better, and we made sure we did.”

Canada and Switzerland faced each other in the third game of this session, and the Swiss took an early lead. They scored one point in the first end and stole another in the second when Canada skip Brad Gushue had a mis-hit, for a 2-0 lead.

The Canadians scored one in the third end when Gushue successfully drew inside three Swiss counters, but, after blanking the fourth end, Switzerland scored one more in the fifth to hold a 3-1 lead at the break.

Canada levelled the game at 3-3 with a score of two in the sixth end.

Then, after a blank seventh end, Switzerland’s fourth player Benoit Schwarz just managed to keep his final draw inside two Canadian stones in the house to score one point in the eighth and take a 4-3 lead.

In the ninth, Canada’s Gushue caught a stone on the way into the house, to give Switzerland a steal of one and a 5-3 lead.

In the tenth end, Switzerland’s Schwarz cleared two Canadian stones at the back of the house, to run Canada out of stones and win the game for Switzerland, at 5-3.