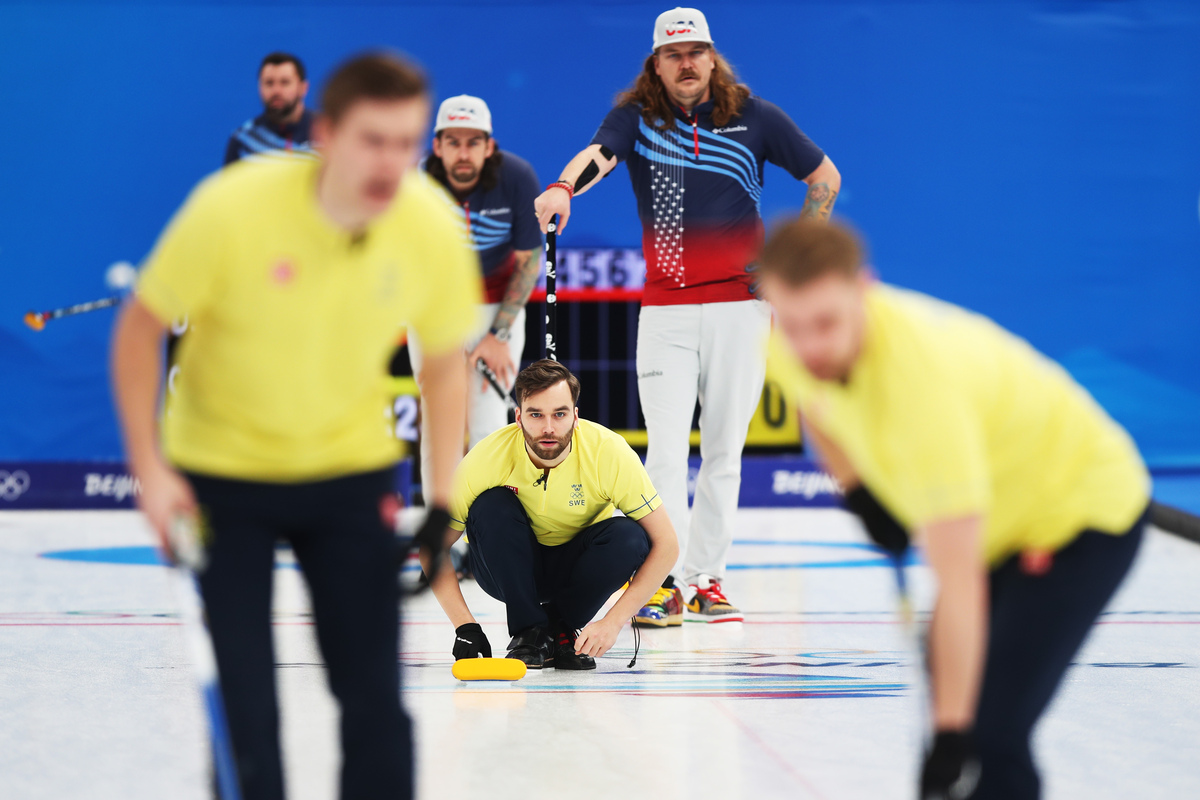 Canada and Sweden were both winners in Thursday afternoon’s second men’s round-robin play, to go to the top of the rankings.

Canada had a last-stone 6-5 win over Norway, while — in a re-run of the last Olympic final — Sweden were 7-4 winners over United States.

Great Britain opened their campaign in this session with a 7-5 win over Italy. In the fourth game, ROC beat China by 7-4.

Scores of two in the second and fourth ends, followed by a single-point steal in the fifth, gave Sweden a 5-2 half-way lead in their game against United States.

In the sixth end, Shuster played a draw for two points to reduce Sweden’s lead to 5-4. In the seventh Sweden skip Niklas Edin cleared out three American stones to score one and move his team’s lead to 6-4.

A steal of one in the eighth by Sweden for 7-4, followed by a blank in the ninth were enough to complete Sweden’s win.

Afterwards, Sweden’s Edin said, “All the wins in the early stages of the Olympics are super important — not just to get the wins, but also for confidence and breathing room.”

“We’re still not playing perfect, but for each game we’ll try to improve small details. If we can reach the play-offs, then we’ll have a lot of energy and be dialled in on the ice and the rocks.”

The game between Canada and Norway was tight all the way, and saw Canada opt for three blank ends.

The Canadians opened with a score of two in the first end and Norway responded with two points of their own in the second.

After blanking the third, and with a Norway stone frozen in shot position, Canada was forced to draw into the opposite side of the house to score one in the fourth end for a 3-2 lead.

The scores were level again at 3-3 as the teams played the eighth end.

Not to be outdone, Norway’s Steffen Walstad played a long raise take-out in the ninth to score two points and level the game again, this time at 5-5.

After keeping the end tidy, Gushue was able to draw for one point in the tenth, for a 6-5 win.

After his team’s second win, Canada skip Brad Gushue reflected on his time away from the Olympic Games, saying “It feels like we’ve been away for a while — 16 years is a long time and the game has changed.”

He added, “We played well today, and controlled the game nicely — much more comfortably than yesterday. There’s going to be a lot of teams beating each other, so if you can get a few wins under your belt early, it gives you a little bit of a buffer.”

Great Britain and Italy both started their campaigns against each other in this session.

Italy were first on the scoreboard, securing two in the first end.

Great Britain could only score one in the second end and then a single point with a hit-and-stay in the third by skip Joel Retornaz moved Italy’s lead to 3-1.

In the fourth, Britain’s skip Bruce Mouat played a gentle tap-out round a front guard to score two points and level the game at 3-3.

Britain made the breakthrough in the seventh with a hit-and-stay for two points by Mouat, to take the lead, at 5-4, for the first time in the game.

Then, in the tenth, with the score at 6-5 in Britain’s favour, Mouat used their last-stone advantage to draw inside an Italian stone sitting in the house to score one more and win by 7-5.

About the game itself, he added, “It was tough, they obviously got off to a slightly better start than us. But we knew that if we stuck with it and stuck together, grind it out, we’d probably get more chances in the second half. And that’s what happened.”

China led ROC by 3-2 at the break in the fourth game of the session. However, in the sixth end, ROC had two counters in the house when China skip Ma Xiuyue played his final draw.

He could only get inside one of them, to give ROC a steal of one and level the game at 3-3.

In the eighth, Ma’s final stone was well-swept onto the button to score one point and give China a 4-3 lead, but this was all outdone in the ninth when ROC’s Sergei Glukhov scored four points, to give ROC their first win, by 7-4.