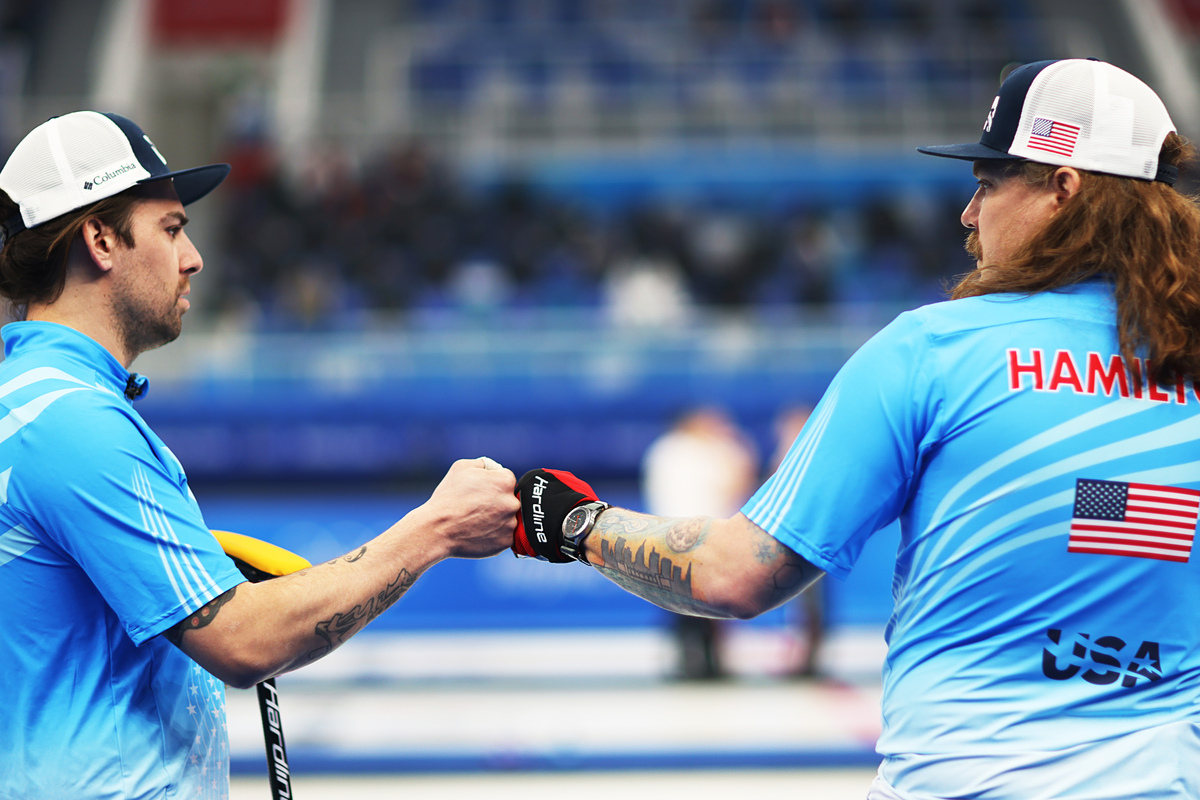 Great Britain completed their round-robin programme with a 5-2 win over Canada to top the rankings and they now face United States in the semi-final.

Switzerland were 10-8 winners over Sweden, and this confirmed the Swedes in second place on the rankings.

They now face third-placed Canada in the other semi-final.

Norway beat Italy by 9-4 in the fourth game of this session, to finish sixth on the rankings.

In the game between Denmark and United States, the Danes started stronger, scoring one point in the opening end, and stealing one more in the second.

However, United States responded with a score of two in the third and a steal of three in the fourth to take a lead, at 5-2, that they were never to lose.

The Americans led by 7-3 as the teams played the ninth end, when Denmark skip Mikkel Krause played a hit-and-stay on a United States stone at the back of the house to score two and reduce the American led to 7-5.

In the tenth, a hit by United States skip John Shuster ran the Danes out of stones, to give his team a 7-5 win and a semi-final berth.

United States third player Chris Plys reflected on his team’s route to the semi-final, saying, “As the week went on, everybody seemed to be dropping games that you didn’t expect them to drop, so we’ve had to have the mentality of focusing on what we can control — we got a little bit fortunate as the week went on, but that’s just curling.”

Looking forward, he said, “The first step for us has been to get here. Britain are a phenomenal team and it’s exciting to get a crack at them.”

Great Britain held a 3-2 lead at the break in their game against Canada.

In the second half, it was British steals all the way.

In the sixth end, Canada skip Brad Gushue mis-judged an angle raise to give up a steal of one. Additionally, in the eighth, with Britain now leading by 4-2, Gushue’s final shot was not strong enough to completely remove a British counter, and Canada gave up another single steal.

The Canadians then conceded in the ninth end, as Great Britain won by 5-2.

After the game, Great Britain lead player Hammy McMillan said, “We wanted to finish top, keep that winning streak going and not lose momentum. I thought we came out firing today and that sets another benchmark for us.”

Looking forward to the semi-final he explained, “We’re probably going to have some food, then a nap and more food… just the same as normal.”

Norway faced Italy in this session, knowing that a win for them and a defeat for United States would give them a semi-final place.

Italy led by 4-3 at the break, but Norway came out strong in the second half of the game.

They carved out two-point steals in each of the seventh, eighth and ninth ends to win by 9-4.  Despite this, United States’ win over Denmark meant that the Norwegians missed out on the semi-finals.

The game was tied again after the eighth end when Switzerland’s fourth player Benoit Schwarz played a gentle tap-up to score two for 7­-7.

Sweden then scored one in the ninth, when their skip Niklas Edin played a hit for an 8-7 lead.

In the tenth, Schwarz scored three points with an angle raise to give Switzerland a 10-8 win.