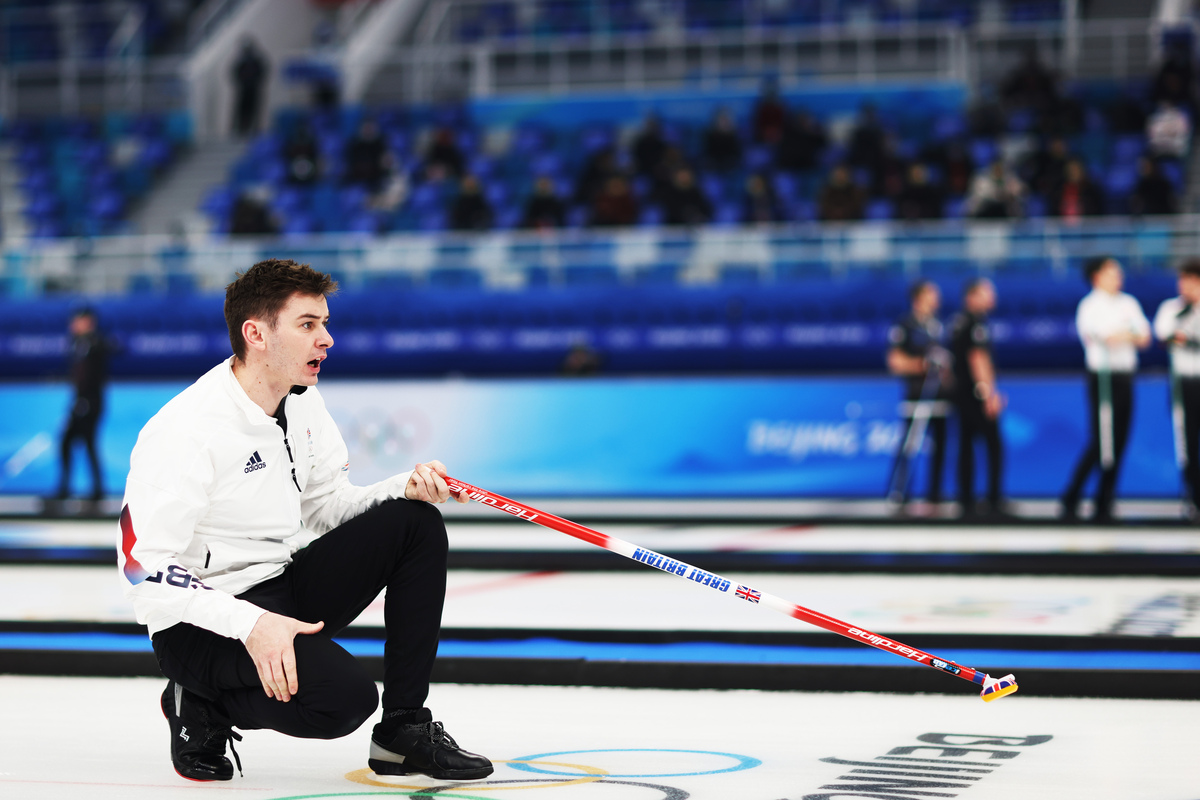 Great Britain beat Sweden by 7-6 in Tuesday evening’s tenth men’s round-robin session, a result that not only seals their semi-final qualification but also brings Sweden’s undefeated run to an end.

China and Italy also won in this session, while it took an extra end to determine that ROC beat Canada.

Great Britain made a strong start, stealing one in the first end and following that up with a score of two in the second for a 3-0 lead. The teams swapped singles in the middle part of the game until, in the eighth, Britain’s skip Bruce Mouat tapped out a Sweden stone to score two points and take a 7-3 lead.

Sweden’s skip Niklas Edin played a double take-out for two points in the ninth, to reduce Britain’s lead to 7-5, but Britain controlled the tenth end, and when Mouat took out a Swedish stone on the wing, they gave up a single steal, but won the game by 7-6.

After sealing their semi-final slot with this win, Britain’s third player Grant Hardie said, “It’s huge to secure the play-off spot and playing Niklas too… it’s always a game we look forward to and it was really tough. But we were able to put in probably one of our best performances so far. We were able to turn the tables in the first half and then it was just about making shots and trying not to leave them anything too simple.”

In the game between ROC and Canada, single steals in both the third and fourth ends gave ROC an early 3-1 lead. Canada chipped away at that for the rest of the game and eventually levelled the score at 4-4 with a single steal in the eighth when ROC’s skip Sergei Glukhov’s attempted clear-out left one Canada stone counting. The teams swapped scores of two in the ninth and tenth ends to put the game into an extra end, and then Glukhov drew his final stone into the four-foot to score one and win, by 7-6.

United States faced Italy in this session, looking for the win that would bring them closer to qualification, but it was the Italians who dominated, taking a 5-3 lead into the break. With the score still to Italy’s advantage at 6-4 in the eighth end, a United States clear-out went wrong, giving Italy a steal of four points for a 10-4 lead.

United States immediately conceded, with one more round-robin chance – against Denmark in the last session.

Despite this win, qualification is now beyond Italy and afterwards their third player Amos Mosaner said, “With everything standing now we are two and five, so we will see what happens.”  Reflecting on beating the Olympic champions, he added, “Of course they are a great team, and it was a good game against them because they are the Olympic champions. It’s always good to play them.”

Norway faced China in the fourth game of this session. China made the break-through in the eighth end with a score of three for a 7-4 lead. Although Norway responded with a score of two in the ninth to reduce China’s lead to 7-6, China played a hit and stay with his last stone in the tenth, to score one point and finish off an 8-6 victory.