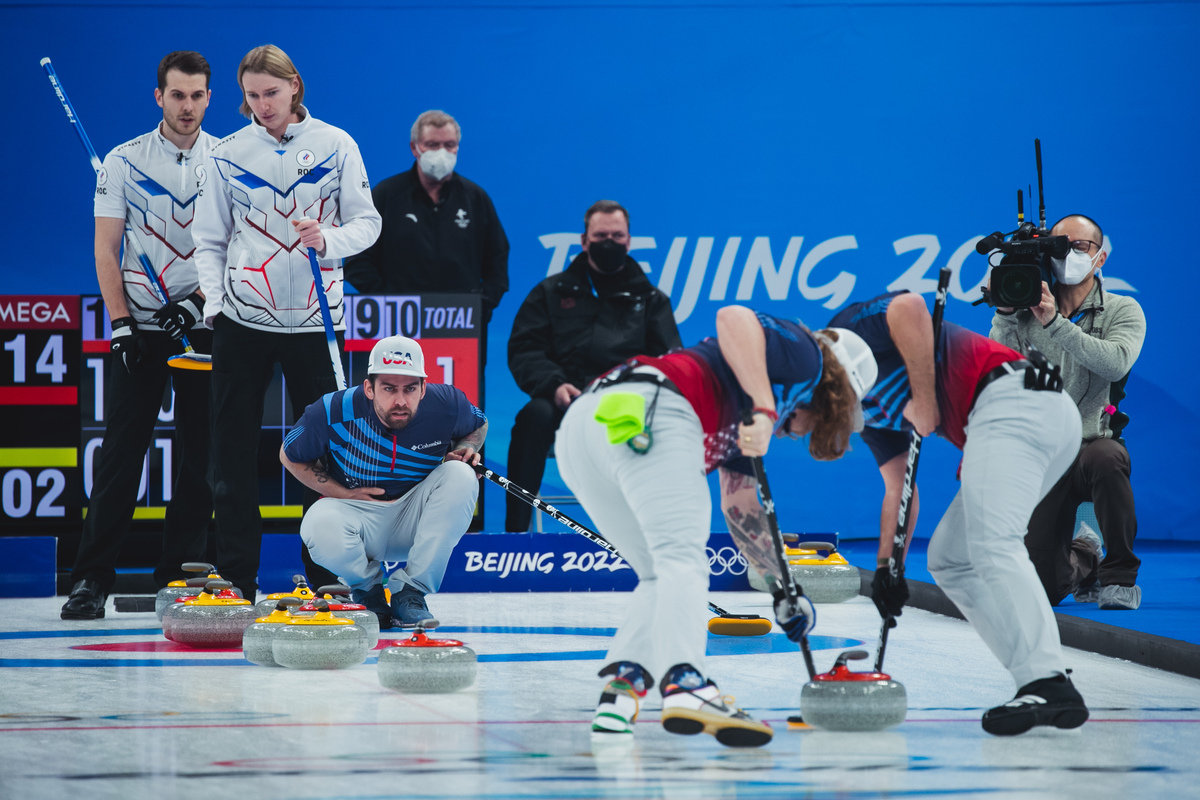 United States’ men opened the defence of their Olympic title with a 6-5 win, but were taken all the way to an extra end by ROC in Wednesday evening’s first round-robin session.

Other winners were world champions Sweden, who beat China by 6-4; Canada, who had an eight-end 10-5 win over Denmark, and Norway, who were 7-4 winners over Switzerland.

In their game against United Sates, ROC held a 3-2 lead going into the fifth-end break, thanks to a steal of two in the fourth end when United States skip John Shuster came up short with his final draw.

In the eighth end, with ROC still leading by 4-3, Shuster played a split at the front of the house to roll two of his stones into scoring position and take two from the end for a 5-4 lead.

ROC blanked the ninth end. Then in the tenth, a cluster of stones sat around the button in when ROC skip Sergei Glukhov wrecked his last draw attempt and it took an umpire’s measure to determine that ROC had indeed scored one point to level the game at 5-5 and force an extra end.

United States skip Shuster was then left with a draw to the four-foot ring to score one point and win the game by 6-5.

After this win, Shuster said, “We had a lot of fun out there. The ice was amazing today. It was a definite grind of a game, but getting wins like that does nothing but help us build character and momentum for what’s going to be a long tournament.”

In their game against China, Sweden established an early 3-0 lead with a steal of two in the fourth end when China skip Ma Xiuyue just feathered a guard with his final stone.

A further score of two in the seventh end with a draw into the house by skip Niklas Edin gave Sweden a 5-2 lead, on the way to their eventual 6-4 win.

After the game, Sweden’s third player Oskar Eriksson, who had just won a Mixed Doubles bronze medal, said, “It’s been busy, but that’s the way I like it too. I got a bronze medal yesterday and we started off with a win here today against China. So, a perfect start to the team tournament. We got a great start in the game and we were a little bit lucky when we stole two. He played a tough port against two and just rubbed the guard. So, was pretty close to scoring one. That was a solid performance by the team, and we’ll try to improve for tomorrow’s game and hopefully get rolling.”

Canada faced Denmark in this opening session and a hit for three in the third end gave them an early 4-2 lead.

Denmark then levelled the game at 4-4 when their skip Mikkel Krause split the house early in the end and then went on to score two points.

Canada led by 7-5 after seven ends when, in the eighth, their skip Brad Gushue played a double take-out for three points and a 10-5 lead. Denmark then conceded.

Speaking later, Canada’s third player Mark Nichols said, “We’re still mapping out the ice and the rocks. All things will come with early-game complications. Getting our draw weight is going to be key. Once you get that, then you’ll start to see more precise shots. We kept it simple enough early to keep it close, and then we were lucky to get a couple of misses out of them. We’re just enjoying the opportunity to be playing against the best teams in the world.”

The fourth game of the session saw Norway face Switzerland.

The Swiss opened the scoring with one point in the first end when their fourth player Benoit Schwarz drew into position.

In the third end, Schwarz had a complete miss to give Norway a single steal and a 2-1 lead.

Norway held a 4-2 lead as the teams played the eighth end. There, Schwarz played a hit-and-stay to give his Swiss team two more points and level the game at 4-4.

In the ninth end an umpire’s measure gave Norway two more points for 6-4, and a single steal of one point in the tenth completed Norway’s 7-4 victory.