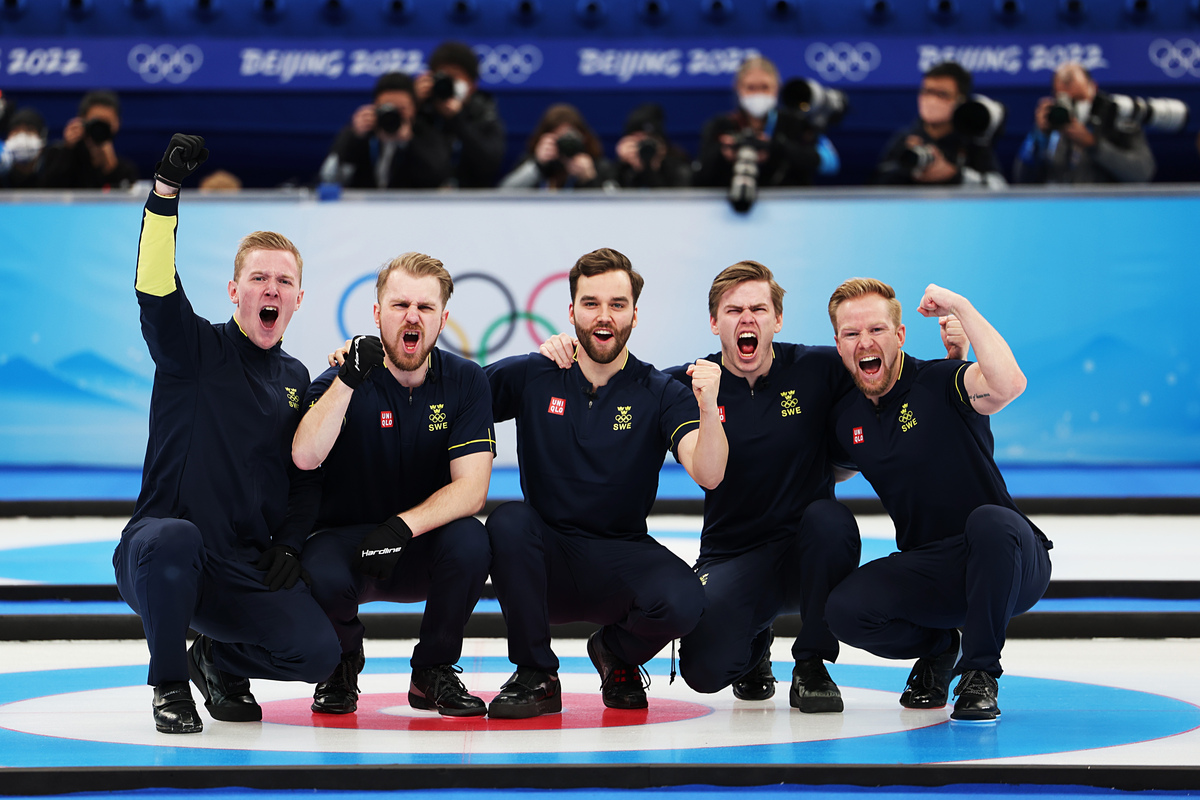 Sweden beat Great Britain by 5-4 in the first men’s Olympic final that went to an extra end.

Having topped the round-robin rankings, Britain started with last-stone advantage and used it to score one in the first end with a draw by their skip Bruce Mouat.

In the second end, Sweden’s skip Niklas Edin played a hit with his second stone to score two points and take a 2-1 lead.

The Swedes were then able to build on this in the third when Mouat was just too light with a tap-back attempt, giving Sweden a steal of one and a 3-1 lead.

In the fourth, Mouat played a draw inside two Swedish stones sitting in the house. It took an umpire’s measure to confirm that the British stone was closest. It meant one point for Britain and a 3-2 lead for Sweden after four ends.

Looking for multiple scores but not able to build anything, Sweden were content to blank the fifth and sixth ends.

In the seventh end, Britain managed to get one of their stones onto the button, surrounded by Swedish stones.

Eventually, try as he might, Sweden’s Edin could not find the angles to winkle the British stone out, and the Britons stole one point to level the score at 3-3.

In the eighth end, with two counting British stones in the house, Edin was forced to draw for one point and a 4-3 lead.

Thanks to a clearing double take-out by their third player Grant Hardie, Britain were able to blank the ninth end to keep last stone in the tenth.

Crucially, Sweden were able to spring out a threatening British stone in the tenth end, leaving Mouat with no option but to draw for one to level at 4-4 and push the game into an extra end.

Sweden had the last stone in the extra end, and when Mouat’s attempted double take-out just missed its second Swedish target stone, Sweden counted one without having to play their last stone, for a 5-4 victory and gold medals.

These gold medals add to the silvers that this Swedish team won in PyeongChang in 2018, as well as the bronze medal that skip Niklas Edin and third player Oskar Eriksson took from Sochi in 2014.

They also add to the Mixed Doubles bronze medal that Eriksson won earlier in the Olympic Winter Games Beijing 2022.

After the final, a delighted Oskar Eriksson said, “It’s pretty cool [to be curling’s most successful athlete], but I would trade them all for one gold. We had a good run.  We started off the week well. Overall, I think that was close to the best game of our lives. That  was one of the best games for us I can remember.”

Sweden skip, Niklas Edin finally won Olympic gold after finishing fourth in Vancouver in 2010, third in Sochi in 2014 and silver medallist in PyeongChang in 2018.

Reflecting on eventually winning the long-awaited gold medal, he said “During the Olympics I haven’t had it on my mind too much, but going into it, it was kind of hard to avoid, because we got reminded of it pretty much daily leading up to these Olympic Games. So we knew that it was missing from our resumé more than anyone. And we knew that it’s in our grasp, but we need to do everything correctly, then also need a little bit of luck along the way and the other teams will try to do the same thing. So even if we perform as well as we ever have, it’s not guaranteed that it will lead to gold anyways.”

“In a sport like curling there are so many small margins and decisions you need to make out there for all four players obviously, so everything needs to come down to a perfect performance over a long time. Preparations also need to be really good over such a long time. And with COVID, it made it really difficult to really prepare like we normally would want to. So, makes it even sweeter now that we’ve actually reached the top of the podium after the last few years being challenging for everyone”, he added.

Britain’s third, Grant Hardie reflected on the lost final, saying “Our over-riding emotion is huge disappointment. We put this team together with one main goal and that was gold this week. At the same time, we’re pretty proud of our performances this week and how we stuck together.”

“It felt we put ourselves on the back foot for most of the game and we had to play five phenomenal ends in the second half to give ourselves a chance, and we nearly did that”, he added.

The Great Britain silver medal team were all making their Olympic debuts.

The medal-winning teams were: