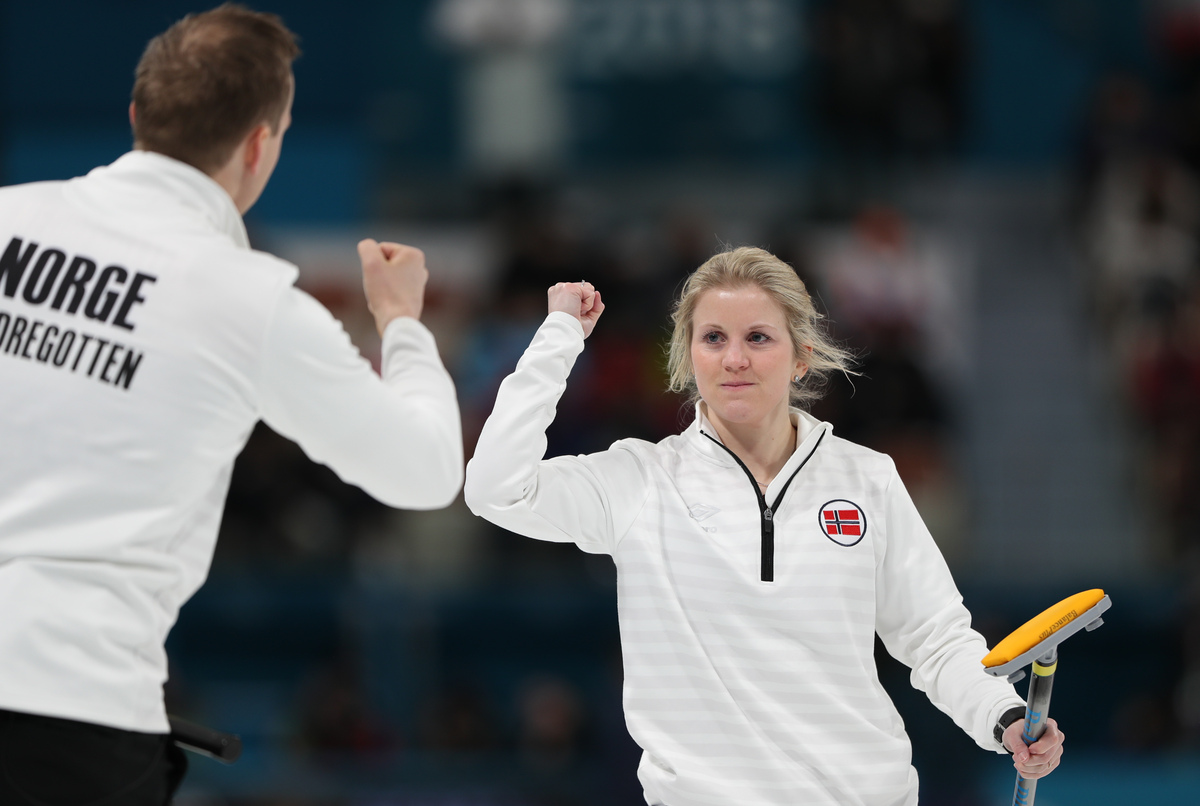 “This time we would like to win a medal game,” said Norway’s Kristin Skaslien as she, and her husband Magnus Nedregotten, prepare to take on the world’s best at the Olympic Winter Games Beijing 2022 in Mixed Doubles.

Four years ago, at the PyeongChang 2018 Olympics, the Norwegian duo exited the competition with a disappointing 8-4 bronze medal game defeat at the hands of Olympic Athletes from Russia, Anastasia Bryzgalova and partner Aleksandr Krushelnitckii.

However, Krushelnitckii’s positive test for the banned substance meldonium meant he and his wife were later stripped of their medals, which were awarded to Skaslien and Nedregotten.

Despite the on-ice disappointment Skaslien associates with PyeongChang, the 35-year-old still looks back on the 2018 Games with fondness.

Weekend trip back to South Korea

“My memories from PyeongChang are curling, eating and sleeping,” she said. “We had early morning games and late evening games every day, so we had to try and get some rest during the day.

“There was a lot of media attention, which we were not at all used to – curling is a relatively small sport in Norway – but suddenly we were on the front page of the biggest Norwegian newspapers.

“We were of course very disappointed right after we lost the bronze medal game, but after a while we decided to be happy about our performance and what we had achieved.

“Coming back for a weekend trip to South Korea to receive our bronze medals, standing just the two of us on the podium, that was a very special moment.”

The Trondheim native says one of her favourite moments from the 2018 Winter Olympics was her last stone in the extra end against Finland to give Norway a 7-6 win, and she will no doubt be wanting to create further memories in Beijing.

February’s 2022 Olympics will be the second appearance of the Mixed Doubles discipline on the sport’s grandest stage.

Having already represented Norway with Nedregotten in the World Mixed Doubles Curling Championships five times before the 2018 Winter Olympics, Skaslien believes the event has become more and more popular after PyeongChang.

The Norwegian said: “We got a lot of positive feedback on Mixed Doubles after ‘showcasing’ our sport in the last Olympics.

“We have seen more players specialising in Mixed Doubles the last couple of years, and a lot more Mixed Doubles tournaments and events on the tour schedule.”

Skaslien and Nedregotten had previously played solely on their respective men’s and women’s teams, but decided to become a mixed doubles team after they began dating in 2012. They both continue to balance Mixed Doubles and their four-person teams, with Nedregotten competing in the Men’s Olympic field as well.

Although Skaslien admits that being married to her Mixed Doubles partner can be challenging at times, she believes the two have now found a partnership that can bring the best out of one another.

She said: “Knowing each other well is definitively an advantage, married or not!

“We have played together for many years, but still working hard to improve our communication.

“Being married off the ice and partners on the ice can be both an advantage and challenging at the same time, but I think we have found a way that works pretty good for us.”

The COVID-19 crisis has hampered the pair’s preparation for Beijing, Skaslien admits.

Skaslien explained: “We haven’t played as many tournaments as we wanted, and no trip to Canada this fall due to the COVID-19 pandemic.

“Our plan was also to have a pre-camp in Asia before going to Beijing, but that won’t happen now. We will go directly from Oslo to Beijing in late January.”

Skaslien and Nedregotten will open their Mixed Doubles campaign against Czech Republic on 2 February, before facing United States and Canada, a day later.

The duo will play nine round-robin games in Beijing, as opposed to seven in PyeongChang, after two more teams were added to the field in 2022.

As far as Skaslien is concerned, the added teams will not affect Norway’s strategy, but she will be expecting tough competition throughout the Games.

She said: “The Mixed Doubles field in Beijing is really strong, and there will be no ‘easy’ games.

“If I have to pick some [of our hardest opponents in Beijing], I would say Sweden, Scotland, Canada, Italy and Switzerland.”

For Skaslien and Nedregotten, it is now all about being ready to perform on the ice and pick up that second Olympic medal.

Skaslien added: “Our preparations have gone well so far – ready now to put in the extra gear to peak our form in beginning of February.”