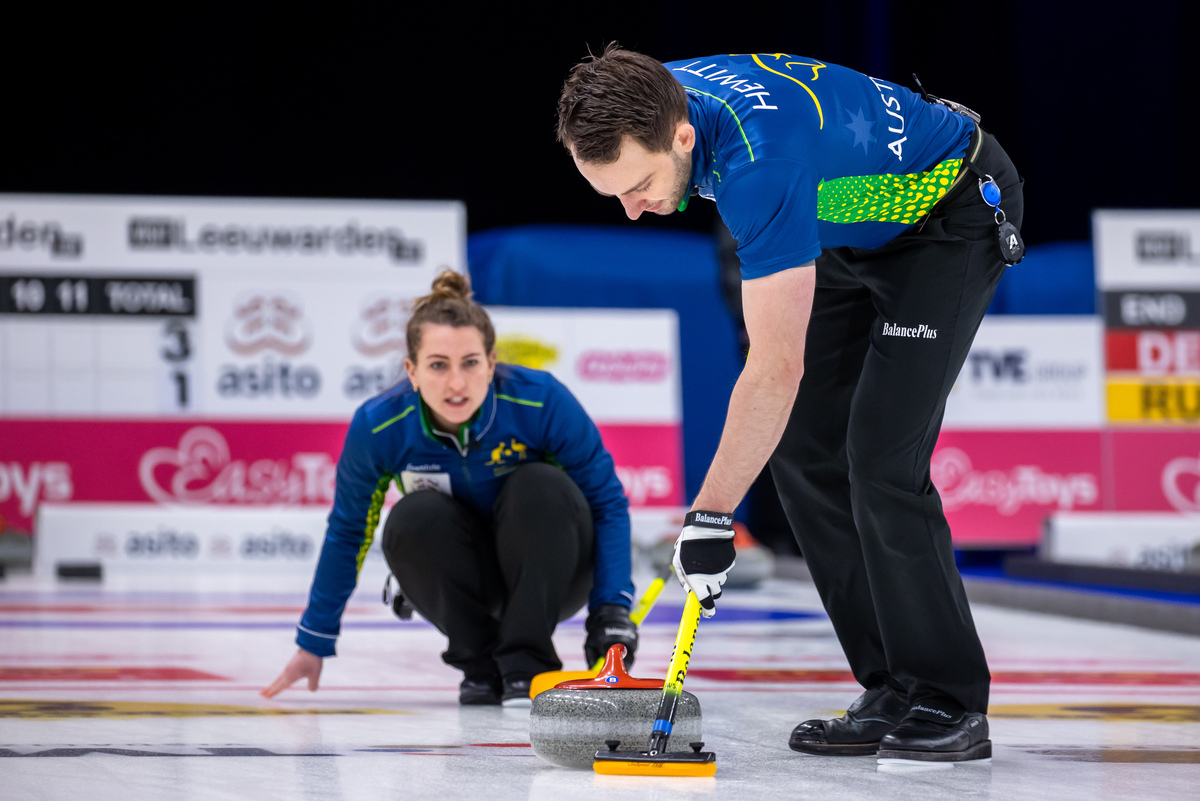 Australia beat Germany by 8-1 in Monday afternoon’s sixth session at the OQE2021, to record their second win so far and move to the top of the Group A rankings.

Hungary, who beat Spain, 8-4, and Denmark, with an 11-5 victory over previously unbeaten Russia, were the other winners in this session.

In the first end of the game between Germany and Australia, Germany’s Pia-Lisa Schoell played a hit, but failed to keep her own stone in the house to hand Australia an opening steal of two points. Germany did manage to score one in the second end but in the third, Australia’s Tahli Gill was able to tap her final stone in, to get one and take Australia’s lead to 3-1.

Afterwards, Australia’s Dean Hewitt said, “It’s tough. It’s a battle every game out there and we just got on the right side of things there and managed to get away with a win.”

His partner Tahli Gill added, “I think yesterday was definitely about getting out all the cobwebs and today starting to pick up the momentum, so I think the key is just to keep on re-focusing and keep on moving that momentum forward.”

Russia already had two wins when they faced Denmark in this session. The Danes laid down a marker in the first end when Jasmin Lander drew her final stone into the house, to open the scoring with three points. Russia scored one point in the second end and in the third Denmark made a raise for two.

The Danes were 7-5 up as they opted to call their power play in the seventh end, and Lander was able to hit for four points, for an 11-5 win.

After what was their second win so far, Denmark’s Henrik Holtermann said, “It felt like we were in control. We had a tough game yesterday where we struggled a lot with the ice. In this game, we felt a lot more comfortable and that helped us a lot.”

Speaking about the score of four that sealed her team’s win, Jasmin Lander said, “It was important to score in our power play. We knew if we scored two or more, the game would probably be over.”

In the third game of this session, former world champions Hungary faced Spain, who were still looking for their first win.

Spain opened with single steals in each of the first two ends, and in the third, Hungary started a recovery when Palancsa Dorottya drew for one. The turning point of this game came in the fifth end when Palancsa played a tap-up to score five and take the lead for the first time, at 6-3. Hungary then went on to win, 8-4, and now join Denmark and Russia in joint second place behind Australia, on two wins and one loss.

Turkey sat out this session of Group A play.