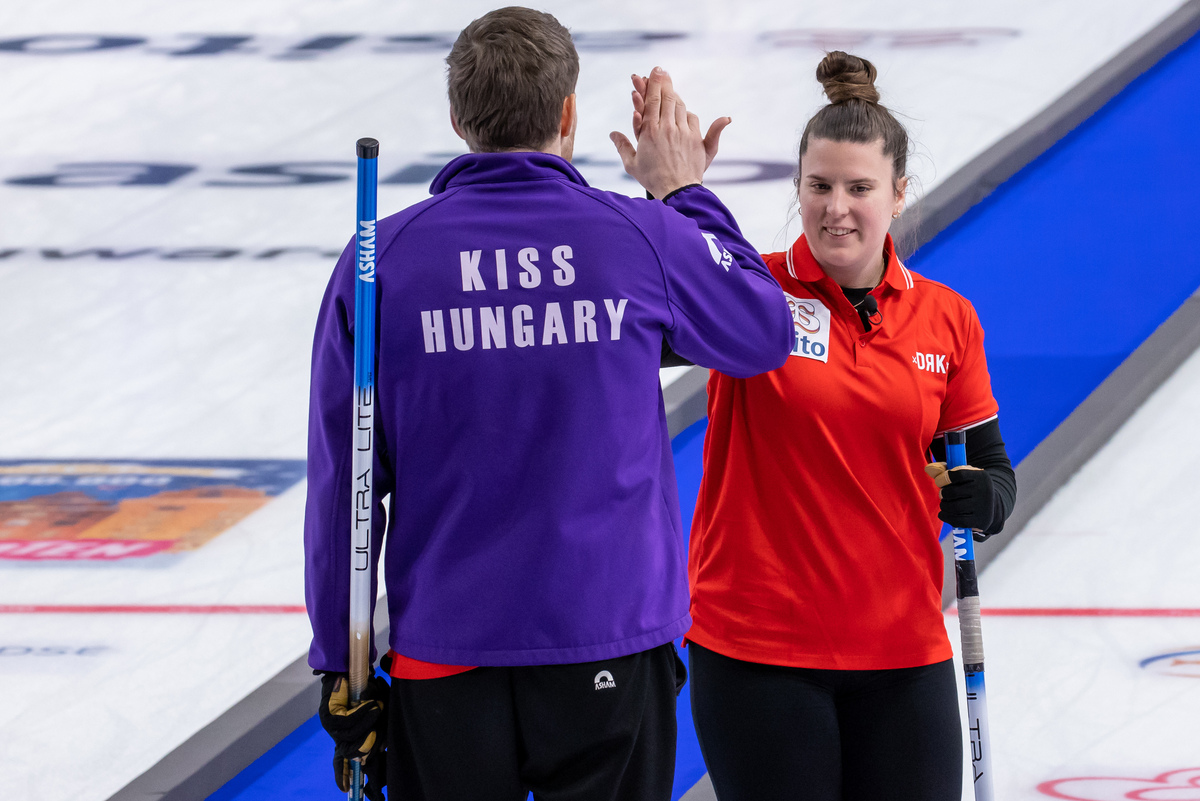 Russia and Hungary both had wins in Wednesday evening’s 14th session of Mixed Doubles round-robin play at the OQE2021 to join Australia, who also won in this session, as play-off qualifiers from Group A.

Russia beat Turkey by 8-5 while Hungary had an 8-3 win over Denmark. Australia’s 9-6 win over Spain meant they completed their round-robin programme undefeated and, as Group A winners, go straight to Thursday’s qualification game.

Russia and Turkey were level at 2-2 after three ends. In the fourth end, Russia’s Anna Sidorova played a controlled weight take-out to score three points and take a 5-2 lead into the break.

In the fifth end, Turkey’s Dilsat Yildiz raised take-out attempt did not turn out as she wanted, and Turkey had to settle for just one point to reduce Russia’s lead to 5-3. Russia scored two points in the sixth end and then, in the seventh, Yildiz had a hit-and-stay to score two points and reduce Russia’s lead again, this time to 7-5.

Russia then called their power play in the eighth and Sidorova scored the one point that completed her team’s 8-5 win.

Afterwards, Sidorova said, “We really felt pretty good and mostly played our game. Of course, there were a couple of mistakes, and you never know when it happens. The main thing is that we had less mistakes than them.”

Speaking about closing the game out she said, “When it’s the last end and you know that if you win this game you’ll qualify, you have to stay focussed.”

When asked what her reaction would be if she qualified for the Olympic Games from this event she said, “If we make it to the Olympics I will cry and kiss the ice – that’s my tradition.”

Like Russia, Hungary knew that they needed to win in this session to keep their Olympic hopes alive.  In the second end, their female player Palancsa Dorottya played a tap to put her stone in scoring position.

Then Denmark’s Jasmin Lander threw away the last stone of the end to make sure she did not cause more damage, handing Hungary a steal of one and a 2-0 lead.

In the third end, Lander’s double take-out attempt jammed at the back to hand Hungary another single-point steal and a 3-0 lead.

Denmark got on the scoreboard with two points in the fourth end. In the fifth end, Hungary played a hit-and-stay to score three points and give her team a clear 6-2 lead.

In the seventh, with Hungary’s lead now 6-3, Palancsa scored two points and increased Hungary’s lead to 8-3. In the eighth end, Hungary ran Denmark out of stones, making 8-3 the final result.

These two results meant that Russia and Hungary both qualified for the play-offs and, because Russia had won the game between the two earlier in the week, they finished second in Group A.

It means that Russia now face Finland – third in Group B, while Hungary, in third place, are up against Group B second-placed Korea.

After the game, Palancsa said, “We tried to put ourselves together mentally after our morning loss (to Australia), because we knew that we needed to win this game to accomplish our goal. I’m happy that we were able to just do that.”

Her partner, Kiss Zsolt looked forward to the game against Korea and said, “We know Korea well, we know how well they can play. We saw that they struggled with the ice as well, and we need to capitalise on their weak spots. We hope for a positive continuation in the competition.”

Australia faced Spain in the third game of this session, and were 5-0 up after three ends.

Spain fought back from this, and, in the fourth end, their female player Ohane Otaegi played a draw shot into the house to score two points and reduce Australia’s lead to 5-2.

By the eighth end, Australia led by 7-6 and their female player Tahli Gill played a hit-and-stay with her last stone to score two points for the 9-6 win that keeps the Australian’s 100% record intact.