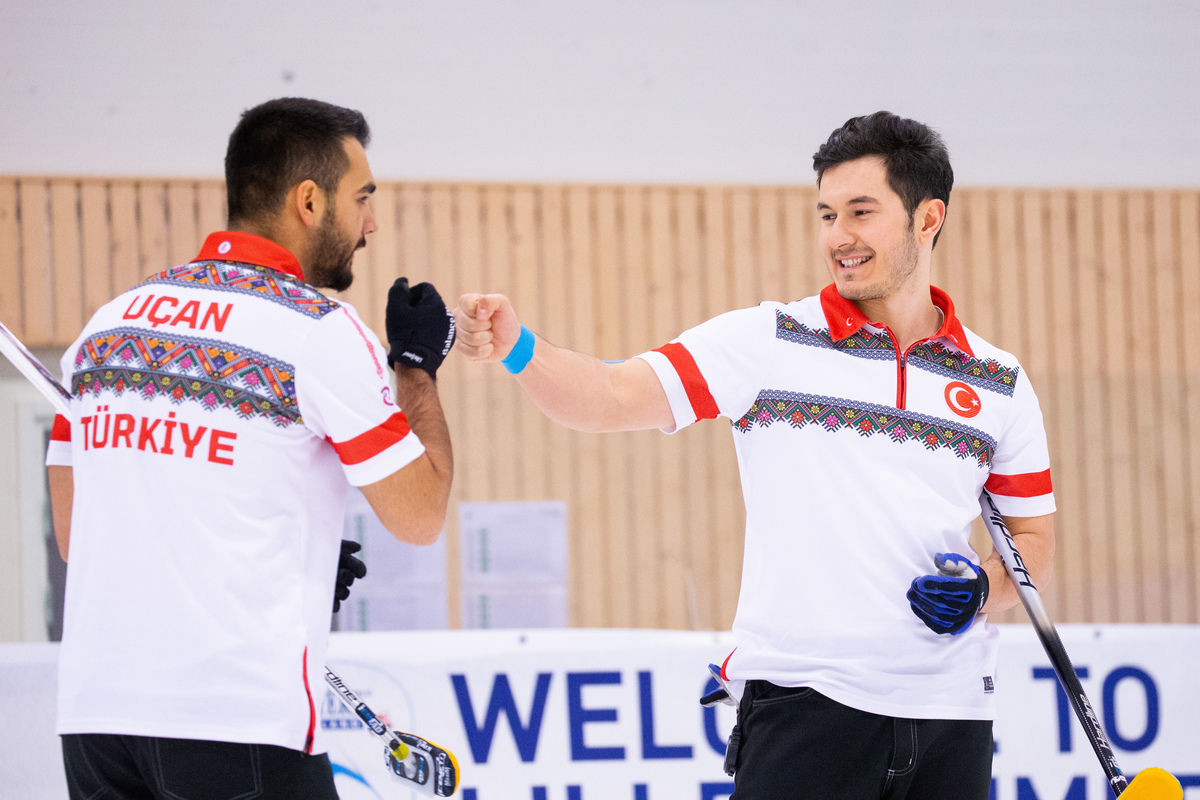 Action in the B-Division of the Le Gruyère AOP European Curling Championships 2021 continued with play-off games on Friday (26 November).

In the morning session, the women’s semi-finals took place, along with the men’s qualification games. The relegation process began in the morning and finished in the evening session.

In one of the women’s semi-finals, top-ranked Hungary met Latvia, who finished the round robin in fourth place. After three ends, the game was tied at 1-1.

In the fourth end, Latvia managed to steal two points, and led the games by 3-1. Hungary scored a single point in the fifth end, but then afterwards, Latvia dominated the game.

At this point, Hungary conceded the game. This result means that Latvia have qualified for the gold medal game and also secured a place in next season’s A-Division.

In the other women’s semi-final hosts Norway met England. After two ends of play England led the game by 1-0, but Norway made a breakthrough by scoring four points in the third end. England never recovered from this.

After Norway scored a single point in the fifth end, they stole three points in the sixth end. After six ends, Norway led by 8-2.

In the seventh and the eighth end, the teams exchanged two-point scores, which meant that Norway was leading the game by 10-4 after eight ends. At this point, England conceded defeat.

It means that Norway moved to the gold medal final to meet Latvia and are also promoted to next season’s A-Division.

Hungary and England will play for the bronze medals. Both medal games will be held on Saturday (27 November) at 11:30 Central European Time (CET).

In the men’s field, Turkey and Russia got a spot in the semi-finals due to finishing on top of the A and B Group in the round robin, respectively, and were awaiting their opponents who played for a semi-final spot in the qualification games.

In one of the qualification games Austria and Latvia played each other. Latvia won that game, primarily due to the fact that they never let Austria score more than one point in an end. The final result was 8-4 in Latvia’s favour, securing them a spot in the semi-final to face Russia.

Wales never got closer than a three-point deficit, and eventually lost the game by 8-4. By winning this qualification game, Spain booked their place in the evening semi-final to face Turkey.

In the semi-final between Russia and Latvia, Russia played an excellent game. They scored three points in the first end, then forced Latvia to take a single point in the second end.

Then, Russia scored another big end in the third end, putting four more points on the board. At this point, Russia led the game by 7-1 after three ends of play. Latvia never managed to catch up with the Russians, and eventually lost the game by 11-3.

Russia’s semi-final victory moves them into Saturday’s gold medal final and also promotes them to next year’s A-Division.

The other semi-final between Turkey and Spain was a close battle throughout. After three ends, the score was level at 2-2, while after six ends, the teams were tied at 4-4. After eight ends, Turkey led the game by 6-5.

Turkey had last-stone advantage in the ninth end, and by blanking that end, they kept this advantage to the tenth end. In that tenth end, they scored a single point and won the game by 7-5.

This victory moves Turkey to the gold medal game and into next year’s A-Division. They will face Russia in the gold medal final on Saturday at 11:30 CET.

After four games played in the relegation process, it was determined that Belarus and Slovenia will remain in the B-Division next year, while Bulgaria and Lithuania have been relegated to the C-Division.

In the women’s field, Spain and Finland will be relegated to the C-Division, due to finishing the round-robin stage in ninth and tenth place, respectively.