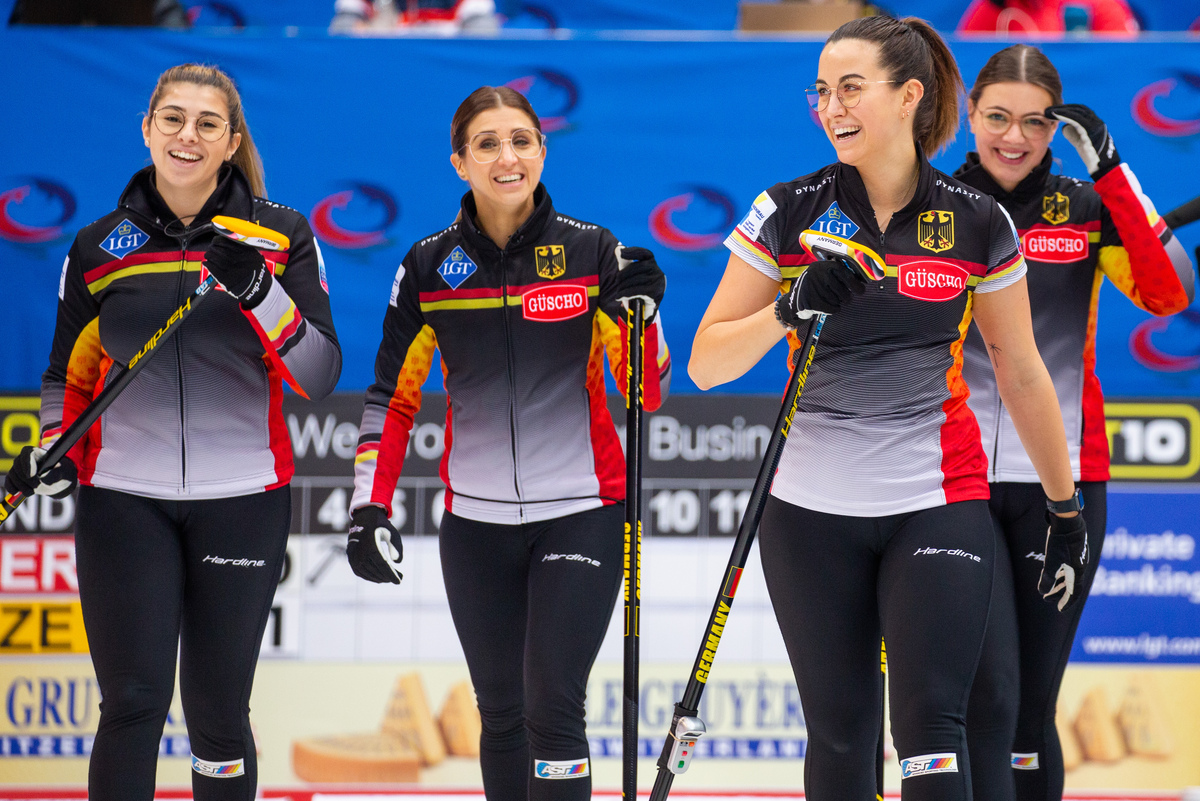 Thursday morning’s ninth – and final – women’s round-robin session of the Le Gruyère AOP European Curling Championships 2021 in Lillehammer, Norway saw Germany beat Czech Republic by 11-4 to finish the round-robin in fourth place and complete the line-up of the four teams qualified for the play-offs.

Germany started the game exceptionally well, stealing a single point in the first end and another three points in the second end. Already holding a 4-1 lead, Germany’s skip Daniela Jentsch scored two more points in the fourth end with a hit-and-stay to increase her team’s lead to 6-1.

Germany then went on to win by 11-4 and complete their qualification for the semi-finals, where they will now face top-ranked Scotland.

Czech Republic finished ninth overall, and will be relegated to next season’s B-Division, but they do have the consolation of qualifying for this season’s World Qualification Event.

After this vital win, Jentsch said, “That was a nice comeback after yesterday’s tough luck against Sweden. I think we deserve the win, and we deserve the play-off spot. We’ve worked hard all week and it’s something we can be proud of. We don’t have a coach and it’s tough for me, but I see that it’s paying off.”

The other three play-off qualifiers had already been decided and they all won in this session too.  Scotland defeated Turkey by 9-4 to stay on top of the table, while Russia beat Estonia by 11-2 and Sweden had a 7-3 win over Denmark.

In their game against Turkey, Scotland were already ahead by 6-4 after eight ends. In the ninth end, their skip Eve Muirhead scored three points with an open draw to complete their 9-4 win.

The Scots now go on to face Germany in the semi-finals, while Turkey’s final position of seventh on the rankings was enough to qualify them directly for the World Championship.

Russia were up against an Estonian team still looking for their first win. The Russians opened strongly when, in the first end, their skip Alina Kovaleva played a draw into the house to score two points. In the second end, Russia stole two points to increase their lead to 4-0.

By the fifth end, Russia were 4-1 ahead when a sweep by all of her team brought Kovaleva’s last stone into position to score two more points and give Russia a 6-1 lead. The Russians went on to win by 11-2 and now face Sweden in the semi-finals. Estonia finished bottom of the table and are now relegated to the B-Division.

Defending champions Sweden faced Denmark in this session. In the fourth end, with Denmark leading by 1-0, Sweden’s skip Anna Hasselborg scored two points with a hit and stay, to take the lead for the first time, at 2-1.

In the seventh end, Hasselborg had another hit-and-stay to score two points and move her team’s lead to 5-2. Sweden then went on to win by 7-3.

They now face Russia in the semi-finals. Denmark’s final rank was eighth, meaning they will go forward to this season’s World Qualification Event, and stay in next season’s European A-Division.

In the fifth game of this final session, world champions Switzerland faced Italy. Switzerland stole a single point in the first end and another two points in the third end to lead the game by 3-0 after three ends.

In the fourth end, Italy’s skip Stefania Constantini was facing four Swiss counters when she played a hit-and-stay to get inside them all and score one point.

In the fifth end, Switzerland scored two points, while in the sixth end they stole two points. In meant that Switzerland was leading by 7-1 after six ends.

In the seventh end, Constantini came up short with her final draw to hand a steal of three points to the Swiss. Italy then conceded with the final score of 10-1 to Switzerland.

The Swiss now finish fifth on the table – just out of the play-offs, while Italy ended up sixth. With these results, both these teams qualified directly for this season’s World Championship.