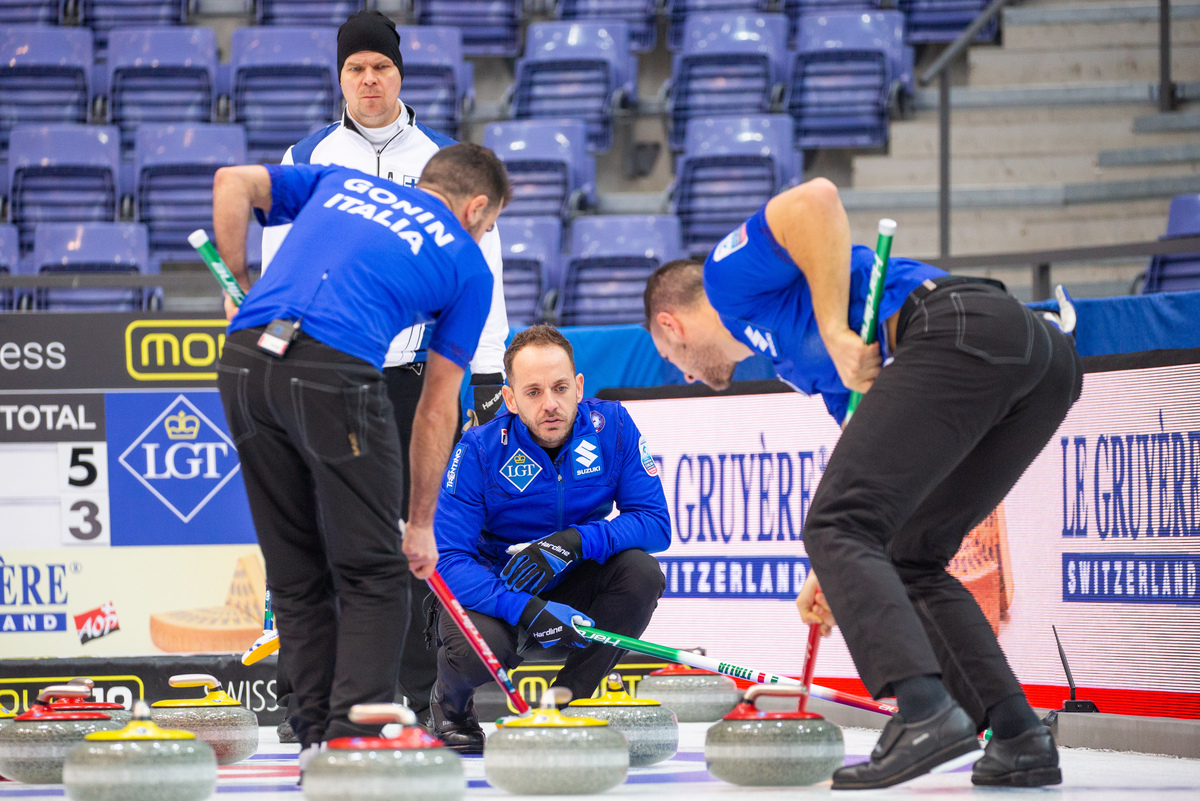 Italy’s victory over Finland in Thursday afternoon’s men’s round-robin play at the Le Gruyère AOP European Curling Championships in Lillehammer, Norway, meant that they joined already-qualified Scotland and Sweden in the weekend medal play-off games. Norway, despite their loss against Scotland picked up the last semi-final spot.

The Scots beat Norway by 8-3 in this ninth and final round-robin session, and while this result gave the Scots a perfect played nine, won nine record, it also meant that Norway ranked fourth overall to complete the play-off line-up.

By a quirk of the draw system, Scotland and Norway will now play each other again in Friday evening’s semi-finals.

Sweden faced Czech Republic and opened with a score of three points in the first end. Sweden then added a steal of two more points in the second end.

They took a 6-2 lead into the break, and added a further score of two points in the sixth end when their skip Niklas Edin hit out a Czech stone.

This 8-2 result after eight ends was enough to persuade Czech Republic to concede.

This result means that Sweden finished second overall and will play third-placed Italy in Friday’s semi-finals, while Czech Republic finish seventh, and qualify for this season’s World Championship.

Italy faced Finland and produced a solid performance, scoring twos in each of the second, sixth and eighth ends.

In that eighth end Finland skip Kalle Kiiskinen came up short with a draw to give up a steal of two. This 8-3 score after eight ends was enough for Finland to concede defeat to Italy.

This puts Italy in third place on the rankings and they now face Sweden in the semi-finals. Finland rank tenth and they will now go to the World Qualification Event 2022.

After this win, Italy skip Joel Retornaz said, “I would say ‘job done’ because it was our goal to make it to the semis, and we’ve reached that with a very good performance. It gives us confidence, so we’re very happy with what we’ve achieved so far. Two more games to go, and we’ll have fun.”

After opening with a single point in their game against Norway, the Scots had a steal of two points in the second end and controlled the game after that. With their lead at 5-3 after seven ends, they scored three points in the eighth end with a raise double take-out by skip Bruce Mouat to complete their 8-3 win.

Afterwards, Scotland’s Mouat said, “We’ve been in the position of finishing top before, but we know that play-offs are a different kind of beast. We’re looking forward to getting going, we’re just going to try to take it like we have with every other game because we’re playing well here and our record shows that.”

Elsewhere in this session, Denmark beat Netherlands by 9-5 to finish sixth overall and qualify for the World Championship. Netherlands finished ninth and now go to the World Qualification Event 2022.

It took all the way to an extra end, but Switzerland beat Germany by 7-6 in this session. This result places Switzerland in fifth overall, just outside the play-off places.

Germany’s final ranking is eighth.  Both these teams now qualify directly for this season’s World Championship.