Netherlands put first win on the board in Lillehammer 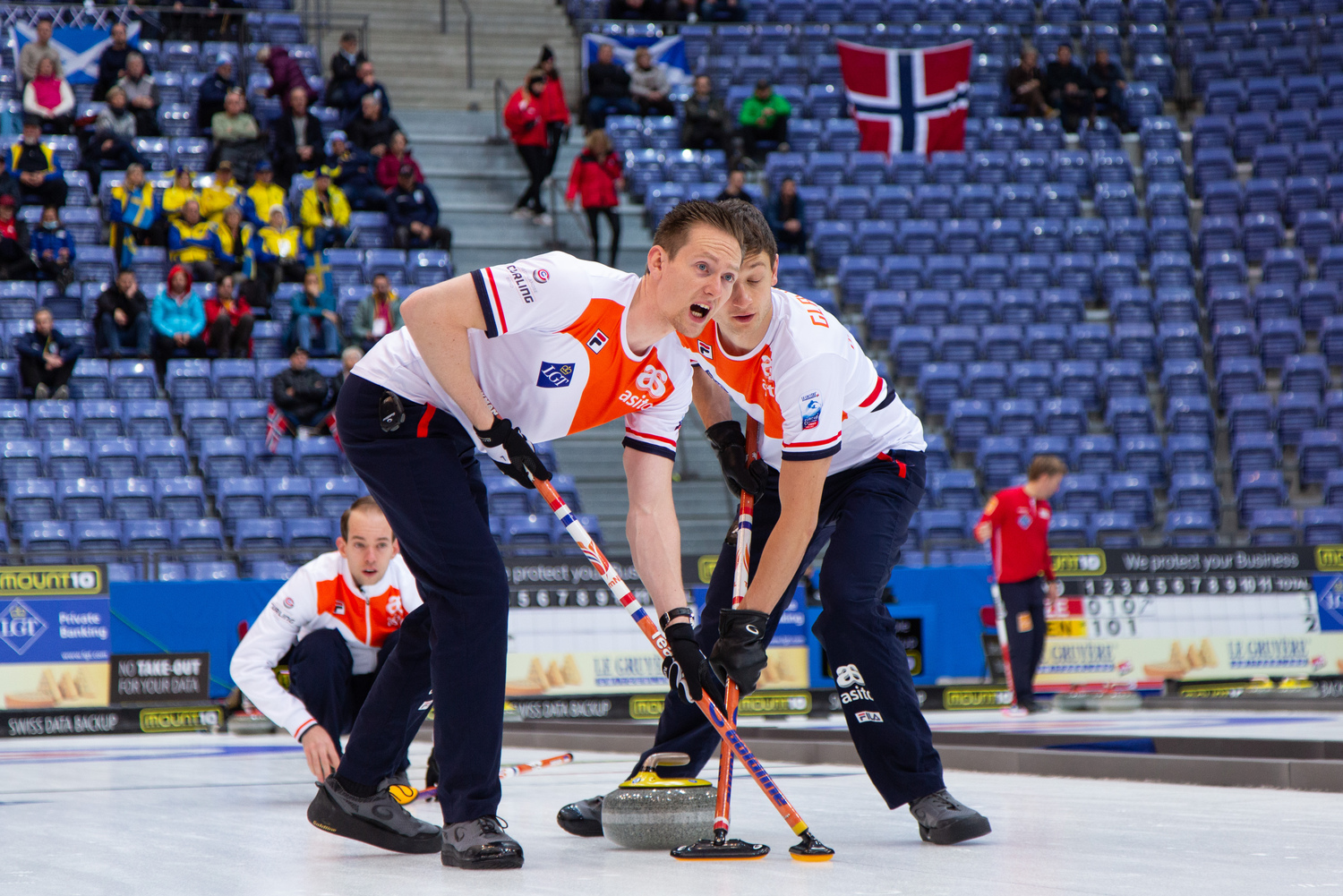 Home / News / Netherlands put first win on the board in Lillehammer

While Scotland continued their table-topping unbeaten run, with a 10-5 win over Germany, in Monday evening’s fifth session of men’s round-robin play at the Le Gruyère AOP European Curling Championships in Lillehammer, Norway, the threat of relegation out of the A-Division begins to loom large for some teams.

When the round-robin programme concludes on Thursday, the teams in ninth and tenth place will be relegated to next year’s B-Division.

They will also have to compete at the World Qualification Event 2022, to be held in Lohja, Finland in January next year, to have any chance of joining the other eight European teams in the line-up for the LGT World Men’s Curling Championship 2022, being staged in Las Vegas, United States in April.

When they came onto the ice to face each other, Netherlands were still looking for their first win so far, while Finland had only recorded one previous victory.

It was Netherlands who took the early lead with a score of two points in the first end. But by the fifth-end break, Finland had moved into a 5-3 lead, thanks largely to a steal of three points in the third end.

Netherlands scored one point in the sixth end, then in the seventh end, they forced a two-point steal to take the lead again, at 6-5.

Finland blanked the eighth end and took one point from the ninth end to level the score, at 6-6, as the teams played the tenth end.

In the tenth end, Netherlands skip Wouter Goesgens, drew his last stone into the four-foot ring to score one point that delivered a 7-6 victory and a vital first win on the ranking table.

Afterwards, Goesgens said, “Finally! We’re happy, we’re improving during the week, and it’s always good to get a win on the scoreboard. Now we just have to move on. We have four more games to play, so four more possible wins.”

He added, “I think we worked very well as a team, we had an oops in end three when we gave away a steal of three, which is hard, but we were mentally tough and I think we bounced back and controlled the game.”

Switzerland — who had only recorded one win so far — faced Italy in this session in a game that saw the lead change hands throughout.

The teams were tied at 4-4 as they played the tenth end and Switzerland had last-stone advantage in that end. Switzerland’s fourth player Benoit Schwarz played a hit-and-stay to score one point and secure the win, by 5-4, and record their second victory of the week so far.

After the game, Swiss skip Peter De Cruz said, “That was kind of big and I felt our standard was good there. We didn’t have many chances in this game, and we played a bit more defensive than we usually do. But that was a solid game and we managed to use the hammer in the first end.”

Defending champions Sweden faced Norway in this session, with these teams sharing second place on the rankings.

The first half was cagey, with Sweden forcing three blank ends as the teams went to the fifth-end break tied at 1-1.

However, in the sixth end, Sweden’s skip Niklas Edin broke the deadlock with a precise weighted angle-raise take-out on a Norway stone to score three points and take a 4-1 lead.

Speaking afterwards, Edin said, “We had a good day today. We felt we could play better after yesterday, and we talked a lot about the games today being really important for the rest of the event. We have good momentum now.”

Speaking about the game-turning score of three points in the sixth end, he explained, “We felt that we had to go for more than one. We had nothing else, so we had to go for it and then, when we made it, that was almost winning the game right there. We’re really happy with four and one right now.”

Scots built an early lead in their game against Germany, with a score of two points in the first end followed by single-point steals in the second and third ends.

The Scots were ahead by 6-2 at the break, but Germany fought back with a score of three points in the sixth end to reduce Scotland’s lead to 6-5.

Scotland then added a single point in the seventh end, then added a steal of three more points in the eighth end, when Germany’s Sixten Totzek could not find the right angle to disturb three Scottish counters around the button. After this end, Germany conceded the game.

Scotland now move onto five wins out of five, while Germany, on just two wins, remain close to the relegation zone.

In the session’s final game, Denmark were up against Czech Republic. The game went to an extra end, and with his final stone, Danish skip Mikkel Krause nudged a Czech stone out of position to score one point and win, by 5-4.

After these results, Finland and Netherlands still sit at the foot of the table on one win, while above them, Czech Republic, Germany, Italy and Switzerland all sit on two wins.