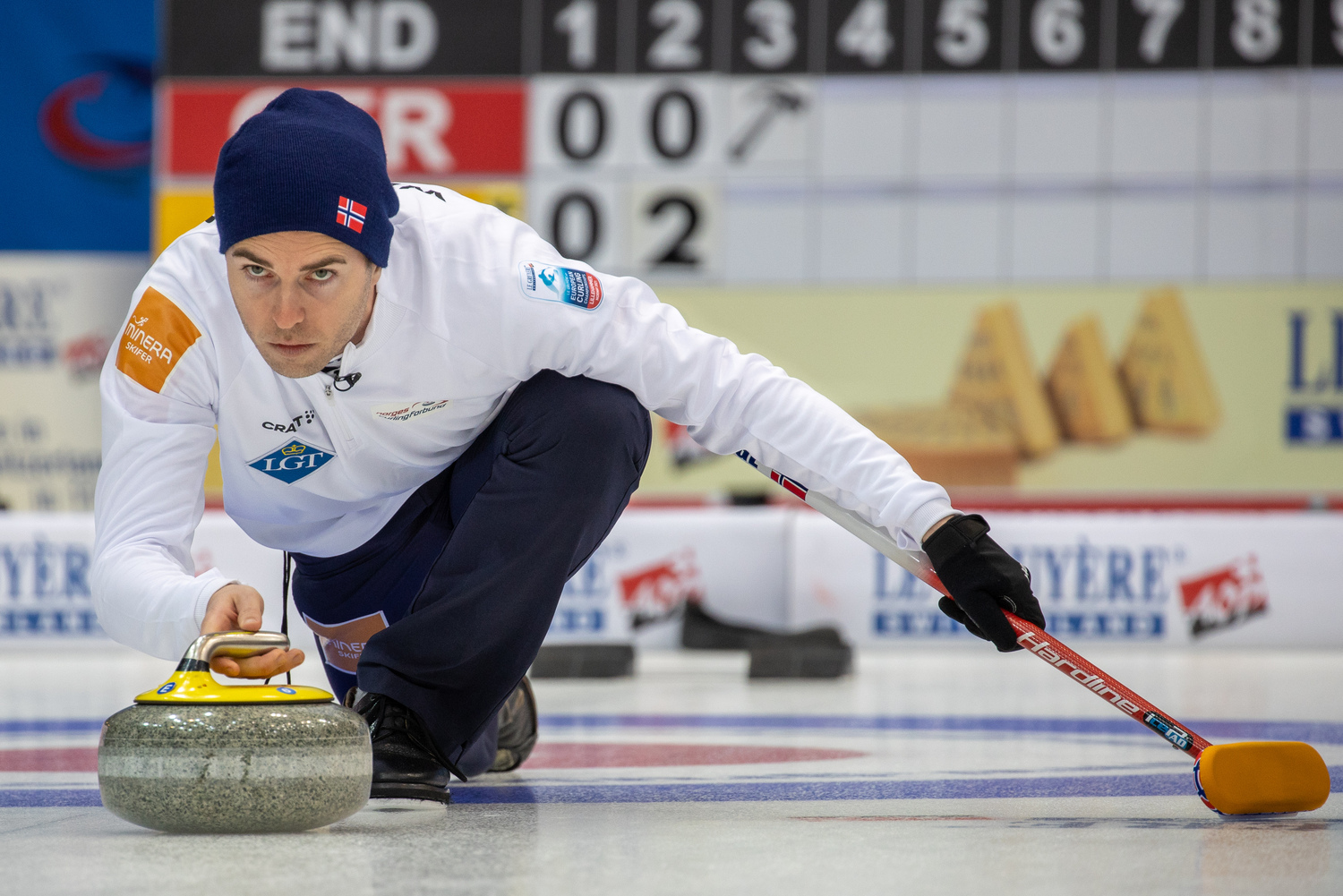 Scotland maintained their clear lead at the top of the rankings in Monday afternoon’s fourth session of men’s round-robin play at the Le Gruyère AOP European Curling Championships 2021, in Lillehammer, Norway. The Scots beat Netherlands, by 9-2, in just six ends.

Scotland started with last-stone advantage and used it to score four points in the first end. Netherlands struggled after that, and a further three points for Scotland in the sixth end convinced the Dutch, who remain the only team yet to win, to concede the game.

When he came off the ice, Scotland skip Bruce Mouat said, “We’re playing well.  We’re enjoying our stuff out there and making a lot of shots. We’re curling at a very high standard right now. It’s been pretty good so far and we’re hoping to continue our upward trajectory. I don’t think we’re too far away from our best.”

Behind the Scots, Norway are in joint second place on the rankings after defeating Germany, by 7-4, in this session. In the sixth end, and already leading by 3-2, Norway’s skip Steffen Walstad played a draw into the house to score two points and move his team’s advantage to 5-2, on the way to their 7-4 victory.

Defending champions Sweden faced Switzerland in this session. The first half of the game was low-scoring, with the teams level at 1-1 after four ends.

After this, Sweden put the first two-point score on the board in the fifth end and then followed that up with a steal of two in the sixth to take a 5-1 lead.

There was no way back for the Swiss after this and they conceded after eight ends, with Sweden eventually winning by 7-2.

Afterwards, Sweden’s skip Niklas Edin said, “It’s a lot about getting the hammer first of all, then scoring the first point, then getting the first two-point lead in the game. That usually wins the game, so we know how important every moment in the first few ends can be. This time it went our way, so we had a fairly easy, controlled game.”

This result puts Sweden into joint second place on the table, alongside Norway.

Denmark faced Finland and, with a score of two points in the first end, took control of the game. The Danes took a 5-2 lead into the break. Then, in the seventh end, the Danes hit out a Finnish stone to put four more points on the board to complete their second successive win, with a score of 9-3.

Afterwards, Retornaz said, “We had two big games yesterday and didn’t win either, so we knew we had to step back today and win. We need to stay up in the ranking if we want to make the play-offs. We had a good performance. It was very tight, and the Czechs played very well.”

Speaking about his final draw, he added, “That is what the skip is supposed to do. You must feel you have that draw to the four-foot inside. You have to hit the four-foot and that’s what we did. It was a team shot.”