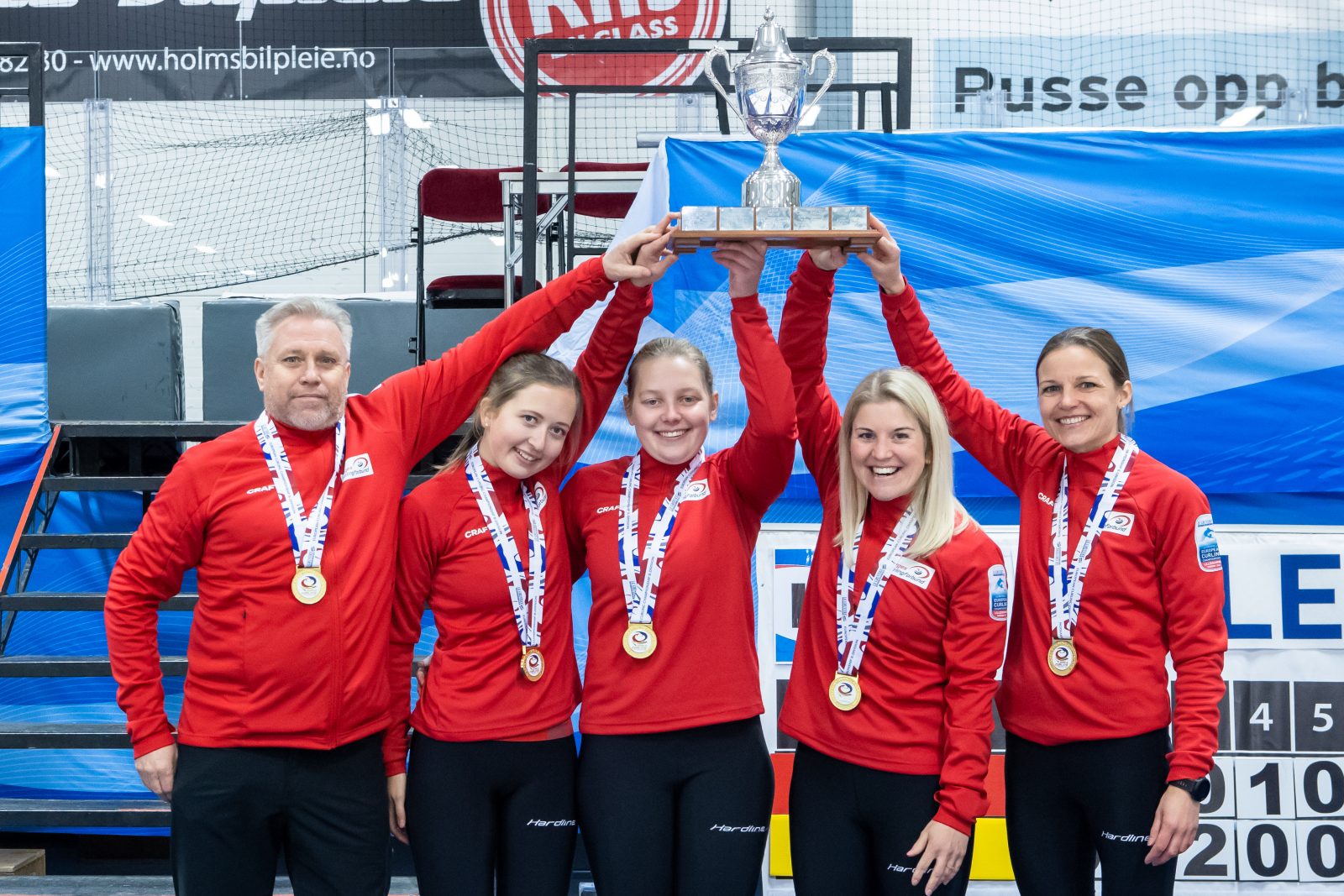 All medal games in the B-Division of the Le Gruyère AOP European Curling Championships 2021 took place on Saturday (27 November) morning.

On the women’s side, hosts Norway met Latvia in the final. After that Norway blanked the first end, the teams traded two-point scores in the next four ends. It resulted in a 4-4 tie at the half-time break.

In the sixth end, Latvia stole a single point and took the lead for the first time in the game, by 5-4. In the seventh end, Norway responded with a two-point score to retake the lead, by 6-5.

In the eight end, Latvia scored a single point and then, in the ninth end, they stole a single point. The teams went into the tenth end by a 7-6 score, Latvia leading, Norway having hammer. In the tenth end, Norway managed to capitalise on their last-stone advantage and put a big score of four points on the board.

With their 10-7 victory, Norway claimed the gold medals, while Latvia settled for silver.

The women’s bronze medal game saw a Hungary-England match-up. In the first end, Hungary scored a single point. In the next two ends, the teams traded single point scores, which meant a 2-1 score after three ends, Hungary leading.

In the fourth end Hungary stole two points, while in the fifth end, they managed to steal another point. Hungary led the game by 5-1 at the half-way break. In the sixth and seventh ends the teams exchanged two-point scores. In the eighth and ninth end, they traded single-point scores.

After nine ends, Hungary led the game, by 8-4. In the tenth end, Hungary ran England out of stones and with their victory, won the bronze medals.

In the women’s competition, both finalists got promoted to next season’s European A-Division and also earned their spot in the World Qualification Event, to be held in Lohja, Finland next January.

In the men’s gold medal final, Russia and Turkey faced each other. After blanking the first end, Russia scored a single point in the second end. Turkey responded with a score of two points in the second end, and led the game by 2-1 after three ends.

In the ninth end, Russia levelled the score by putting another point on the board, taking the game to an extra end. In that eleventh end Turkey scored a single point with hammer, and won the gold medal game by 4-3.

After blanking the first end, Spain capitalised on having the last-stone advantage and scored four points in the second end. In the third end, Latvia could only score a single point to reduce Spain’s lead to 4-1. In the fourth end, Latvia stole a single point, while in the fifth, they stole four points. It meant that at the half-time break Latvia was leading by 6-4.

In the sixth end, Spain levelled the score at 6-6 by putting two points on the board. In the seventh end, Spain managed to steal a single point. After seven ends, it was again Spain who led the game, by 7-6.

In the eighth end, Latvia scored one point to level the game at 7-7. In the ninth and tenth end the teams traded two-point scores, which resulted in a 9-9 tie after ten ends.

Spain played an exceptional extra end having the last-stone advantage, and their score of three points meant a 12-9 victory over Latvia, winning the bronze medals and earning a spot in the World Qualification Event 2022.