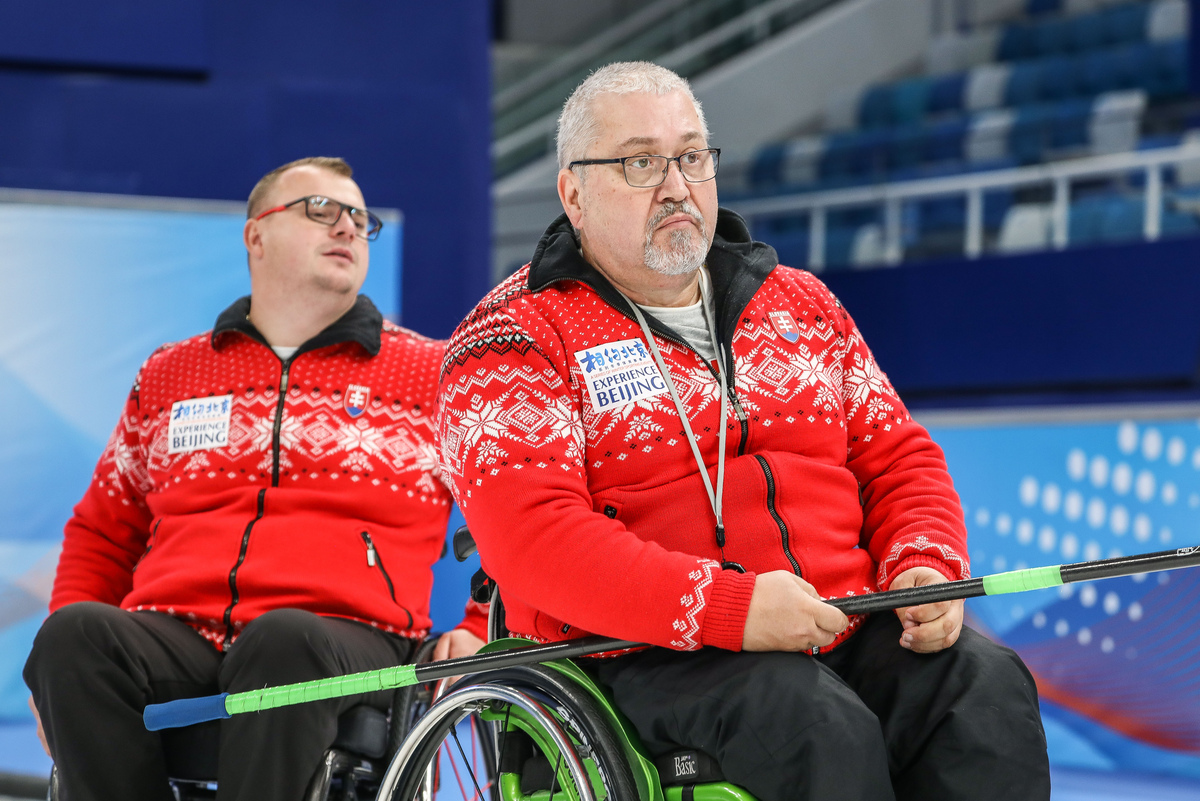 The sixth session of the Kuntai World Wheelchair Curling Championship 2021 took place on Monday (25 October) morning in the Beijing National Aquatics Centre in China. In the session, Slovakia, Canada, Latvia and United States were victorious.

Slovakia and Switzerland both came into the game seeking their first victory in the Ice Cube.

After the blanked the first end, Slovakia stole a single point in the second end, when Switzerland skip, Laurent Kneubuehl missed his double take-out attempt.

Then at the end of a precisely played fourth end, Slovakia scored four points for a 5-1 lead at the break.

Slovakia stole another four points in the fifth end, partially due to an exceptionally executed promotion take-out from skip, Radoslav Duris with his first stone. Slovakia led the game by 9-1, and another three stolen points in the sixth end made Switzerland concede the game, with an final result, 12-1 to Slovakia.

After the game, Slovakia’s second player, Imrich Lyocsa said: “This was our third game, and we unfortunately lost the first two. The game had a slow start. We got the first point, but then they equalised the game. Afterwards we got a handle on the ice, and we scored a four which gave us an edge. From that time on, we managed to control the game. We desperately needed this victory.”

This game was the rematch of last year’s semi-final. That game resulted in an extra-end victory for Canada in a low-scoring (3-2) game. In this game, Sweden was the first to put a point on the board, scoring a single point in the second end.

Canada replied by scoring two points of their own in the third end.

In the fourth end, Sweden scored another single point and the teams went into the break tied at two each. After the break, Canada capitalised once more on their last-stone advantage to score two points.

Sweden responded with a two-point score of their own to level the game at four each in the sixth end.

Canada blanked the seventh end to carry the hammer into the last end. In that last end, both teams played precisely, leaving Canada fourth player Jon Thurston with a difficult raise take-out to remove the Swedish counter biting the one-foot. He executed that perfectly, scoring a crucial single point for Canada to win the game, by 5-4.

After the game, Canada skip Mark Ideson said “We love playing against Sweden, they are a great team to play against, we have a great relationship with them. They always give us a great game. We are happy to come away with the W and kind of build off the momentum that we got on day two, and hope to carry that forward.”

In the fourth end, Latvia stole a single point after Norway skip, Jostein Stordahl was unable to remove the counting Latvian stone in the four-foot with his last stone. The teams went into the break with Latvia leading, by 4-1.

In the fifth end, Latvia forced Norway to take a single point, then scored two points of their own with hammer.

Norway blanked the seventh end. The Scandinavians scored only a single point in the eighth end, which resulted in a 6-3 final score in favour of Latvia.

In this game, after blanking the first end, United States stole a single point in the second end and went on to steal multiple points in the next three ends, leading the game 8-0 after five ends.

Korea got on the board with two points in the sixth end, after which they conceded defeat. The final score was 8-2, to United States.