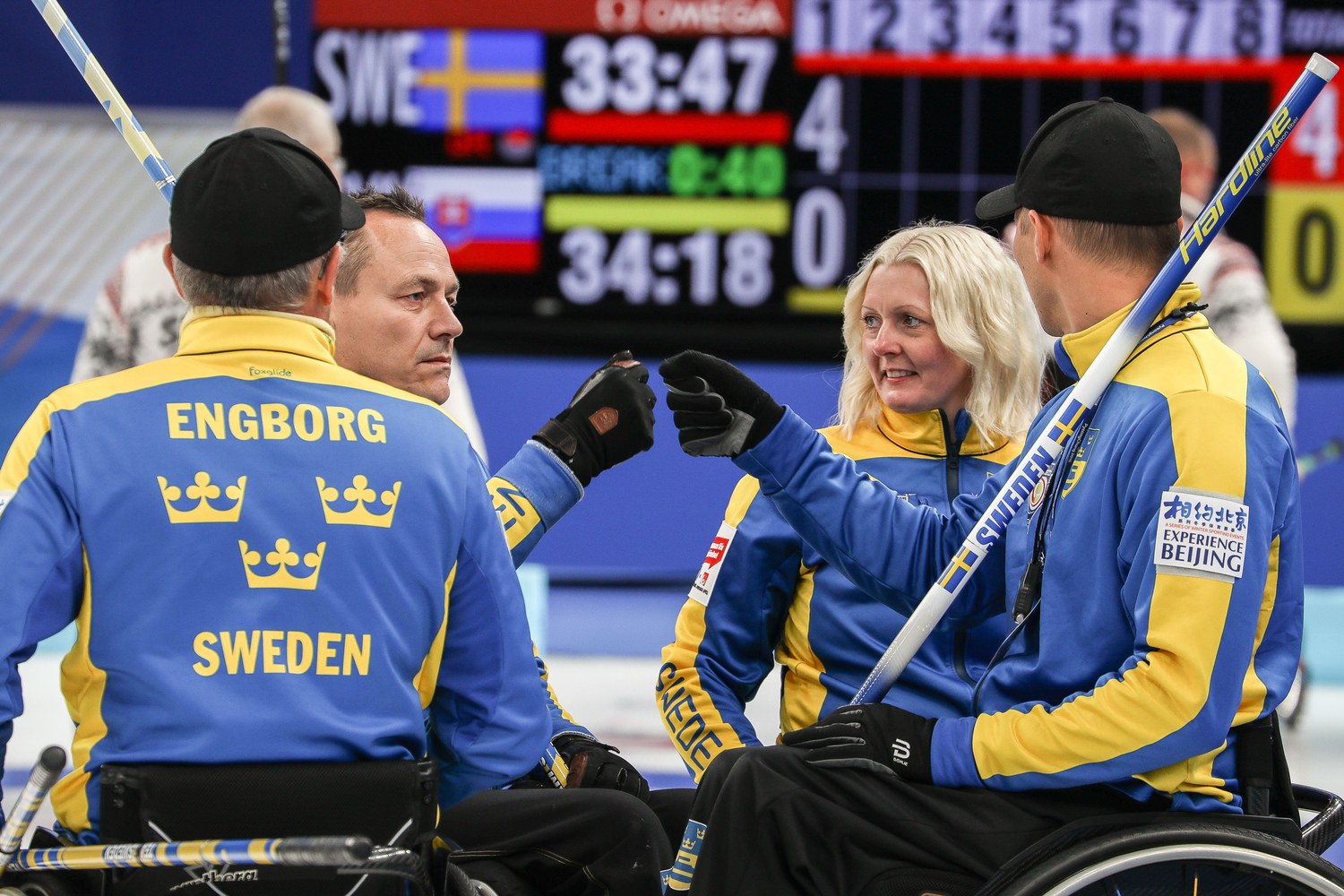 Sweden went into the game having two victories under their belt, while Italy had a 1-1 win-loss record before this match-up.

Sweden had a great start to the game, scoring one point in the first end then stealing another point in the second end.

In the third end, Italy got on the scoreboard with a single point before Sweden replied with two points own in the fourth end, for a 4-1 lead going into the break.

In the fifth end, Italy bounced back, scoring three points to level the score at 4-4. Italy then took the lead for the first time in the game after stealing two points in the sixth end when Sweden’s Viljo Petersson-Dahl was unsuccessful with his take-out attempt on his last stone.

In the seventh end Sweden pulled off a three-point end taking back the lead, 7-6, going into the last end without the last stone advantage.

In that last end, Sweden placed lots of stones in the house, forcing Italy fourth player, Egidio Marchese to play a precise draw with his last stone. He was heavy with his throw, giving up a steal of two points and giving Sweden the 9-6 victory.

After the game, Sweden skip Viljo Petersson-Dahl said, “I think we had low energy, tired from the last game. So we had to fight to be our best but we managed to win at least. But we can play better curling. I made a double in the seventh end, and that gave us a three, so that was the turning point because we almost lost it. So, it was a tight game.”

In this session, Korea played their third game, looking for their first win of the event. They faced an undefeated Scotland side, who had two wins so far.

After scoring single points in the first two ends, Scotland was lead the game 2-0 going into the third end. In that end, Korea played with great precision to score three points to take the lead.

In the fourth end, Korea put significant pressure on Scotland and filled the front of the house with three counters. Scotland skip, Hugh Nibloe’s take-out attempt with his final stone was unsuccessful, giving up a steal of three points and giving Korea a 6-2 lead at the break.

After the break, Scotland put two single-point scores on the board and reduced their deficit to two points. Then, in the seventh end, Korea responded with two points, to take an 8-4 lead into the last end.

In that last end, Scotland responded with two points of their own, which resulted in a 8-6 final score in Korea’s favour.

After losing their game to China earlier in the day, RCF were looking to respond with a victory in the evening session. They started well in that endeavour, stealing single points in the first three ends.

In the fifth end, already leading 4-1, RCF scored another two points with hammer, extending their lead to four points.

In the sixth end, RCF stole another two points after United States skip, Matthew Thums came up short with his last draw.

United States pulled out an excellent performance in the seventh and eighth ends, scoring four points and stealing a single point, respectively. This finish fell short of the points needed to level the game, making the final score, 7-6, to RCF.

After the game, RCF skip Konstantin Kurokhtin said, “This game wasn’t simple. Team USA are a good team, good players. We had a big wish, we wanted to show that we can play well. I think that we did that.”

In the last game of the session Canada played against China.

In their round-robin game at the 2020 world championship, China claimed a 12-2 victory and Canada was looking to reverse that result in this championship.

After the first two blanked ends, China stole a single point in the third end, when Canadian fourth player, Jon Thurston rolled out with his last take-out attempt.

Canada got on the board with two points in the fourth end to lead 2-1 at the break. Then, in the fifth end, Canada put pressure on China, which resulted in a single-point steal, as China skip and fourth player Sun Yulong rolled too far with a take-out attempt with his last stone.

After that the teams exchanged single-point scores in the sixth and seventh ends, which meant a 4-2 score going into the last end, with Canada ahead.

In that last end, Canada ran China out of stones, claiming their second victory of the competition.