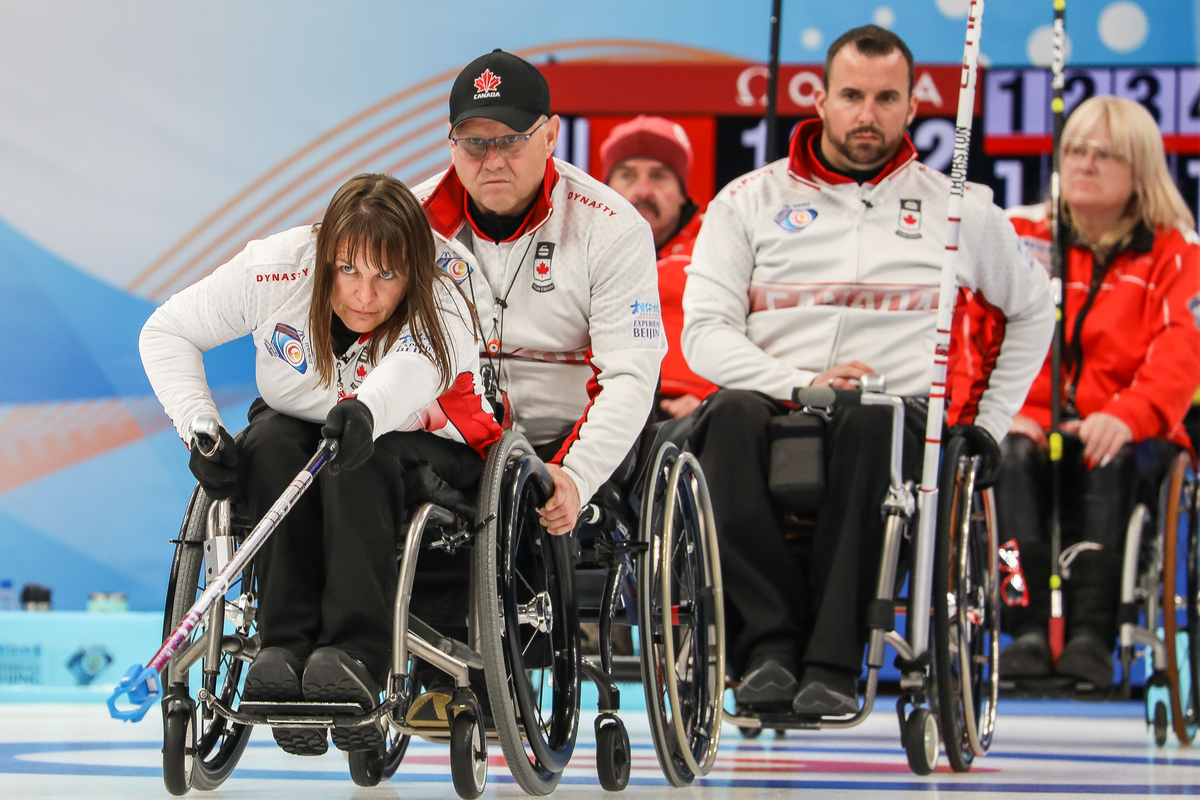 The fourth session of the Kuntai World Wheelchair Curling Championship 2021 took place on Sunday (24 October) afternoon in the Ice Cube in Beijing, China, and saw victories for Canada, Latvia, United States and Sweden.

Canada, the silver medallists from the 2020 edition of the world wheelchair championship, took on Switzerland in this session, with both teams looking for their first win.

Switzerland opened the scoring with one point in the first end. Canada responded with two points of their own in the second end.

In the third end, Canada stole a further two points when Switzerland skip and fourth player, Eric Decorvet was unsuccessful with his hit-and-stay attempt.

In the fourth end, Switzerland could only score a single point, as their draw attempt with their last stone was light.  The teams went into the break with Canada ahead by a score of 4-2.

In the second half of the game, the teams exchanged single-point scores with hammer until the last end. Canada led by 6-3 going into the eighth end, where they eventually ran Switzerland out of stones, making 6-3 the final result.

Canada skip Mark Ideson said after the game “We’re happy to get in the win column. It’s been a long time since we’ve been in a competitive environment, so we knew there was gonna be rustiness. We’re gonna build momentum from the loss yesterday, we picked up a win today and hopefully we can keep going.

In this game, Latvia faced a Korea side still looking for their first win.

After Latvia’s single-point score in the first end, Korea capitalised on their last-stone advantage in the second end to put three points on the board.

In the third end, Latvian fourth player, Agris Lasmans tried to draw inside the two Korea counters, but he was just a bit heavy, giving up a steal of one point.

In the fourth end, Latvia scored a single point, and the teams went into the break with Korea leading, 4-2.

Latvia stole a single point in the fifth end after Lasmans’ perfectly executed hit-and-roll with his last stone, then successfully attempted to steal the sixth and seventh ends, with two points and a single point, respectively.

With Latvia leading 6-4 going into the eighth end Korea needed two points to take the game to an extra end. With the final stone of the game and Korea already sitting shot stone on the button, Jang Jaehyuk’s last stone wrecked on a guard, resulting in a single-point score for Korea and a 6-5 overall end score in Latvia’s favour.

Latvian skip Polina Rozkova said after the game “It’s about one missed shot. I’m glad about the result but I’m not satisfied with my own game. The team played really good and I’m really glad to have them because they’re really supporting me and everything else is really good.”

The teams traded single points with hammer in the first half of the game, going into the break tied at two each.

In the seventh end, Norway scored a single point, making the score 5-3 going into the last end. In that end, United States ran Norway out of stones, for the 5-3 victory.

Sweden had an exceptional start to their game against Slovakia, scoring four points in the first end, partially due to their precise stone-placement.

Slovakia responded with a single point in the second end, then one more point in the third end, when Swedish skip and fourth player Viljo Petersson-Dahl was heavy with his last stone.

In the fourth end, Sweden scored another three points, leading the game by 7-2 at half time.

Slovakia manufactured a two-point score in the fifth end for the first time in the game, narrowing the gap between the teams to three points.

However, another three-point score by Sweden in the sixth end put the result beyond doubt. Despite a single-point score by Slovakia in the seventh end, they conceded defeat with the end result 10-5 in favour of Sweden.