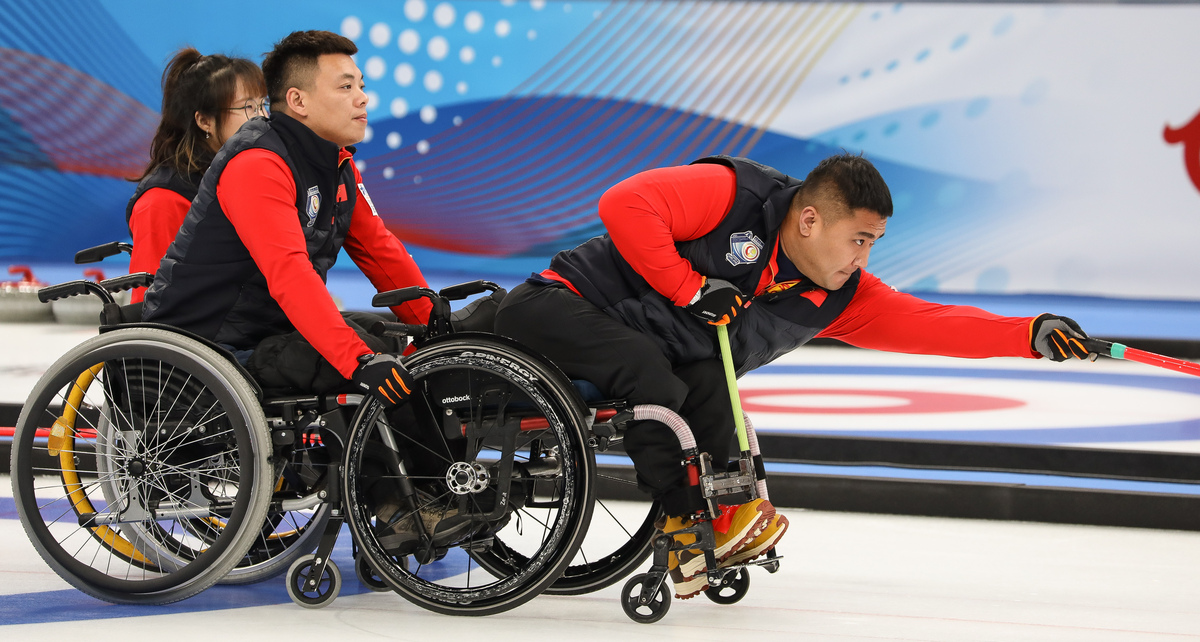 In this session the reigning Paralympic champions, China, and defending world champions, RCF faced each other.

China held the hammer in the first end, and by blanking it, carried their last-stone advantage to the second end where they scored a single point.

In the third end, China applied significant pressure to RCF, filling the twelve-foot ring with stones. RCF’s fourth player and skip, Konstantin Kurokhtin faced four China counters as he prepared to throw his last stone. His take-out attempt failed to remove any of the stones giving China a steal of four points.

In the fourth end, RCF got on the board with a single point, and the teams went into the break with a China leading, 5-1. In the fifth end, China scored a single point.

After China skip, Wang Haitao’s perfect double take-out with his last stone, RCF was forced to take a single point in the sixth end. Then, in the seventh end China scored another two points, after which RCF conceded with an 8-2 final result in favour of China.

China skip, Wang Haitao said afterwards, “Both teams played well, and maybe we were a bit better today. We need to practice more with the team and prepare for the upcoming games. Our goal is to prepare for the 2022 Winter Paralympics.”

Scotland triumphant over Italy after dominant second half

Italy, who qualified for this championship by finishing in third place at the World Wheelchair-B Curling Championship in April 2021, had a great start to the game, scoring three points with hammer in the first end.

Scotland replied in the second end with two points. In the next two ends the teams traded single points, which resulted in a 4-3 half-time score in Italy’s favour. The momentum shifted in the second half of the game.

In the fifth end, Italian fourth player, Egidio Marchese was unsuccessful with a take-out attempt with his last stone, giving Scotland a steal of two points to extend their lead.

In the next two ends, a Scottish steal of a single point and then another steal of four points resulted in a 10-4 score in Scotland’s favour. With this, Italy conceded defeat after seven ends.

Scotland skip, Hugh Nibloe said, “Italy played really well, we started quite slowly, and we were one down at the break. So, we grabbed the second half and much like the Norway game, made shots. We made the easy ones and left them with difficult shots, it was a difficult game. So happy to get through it.”