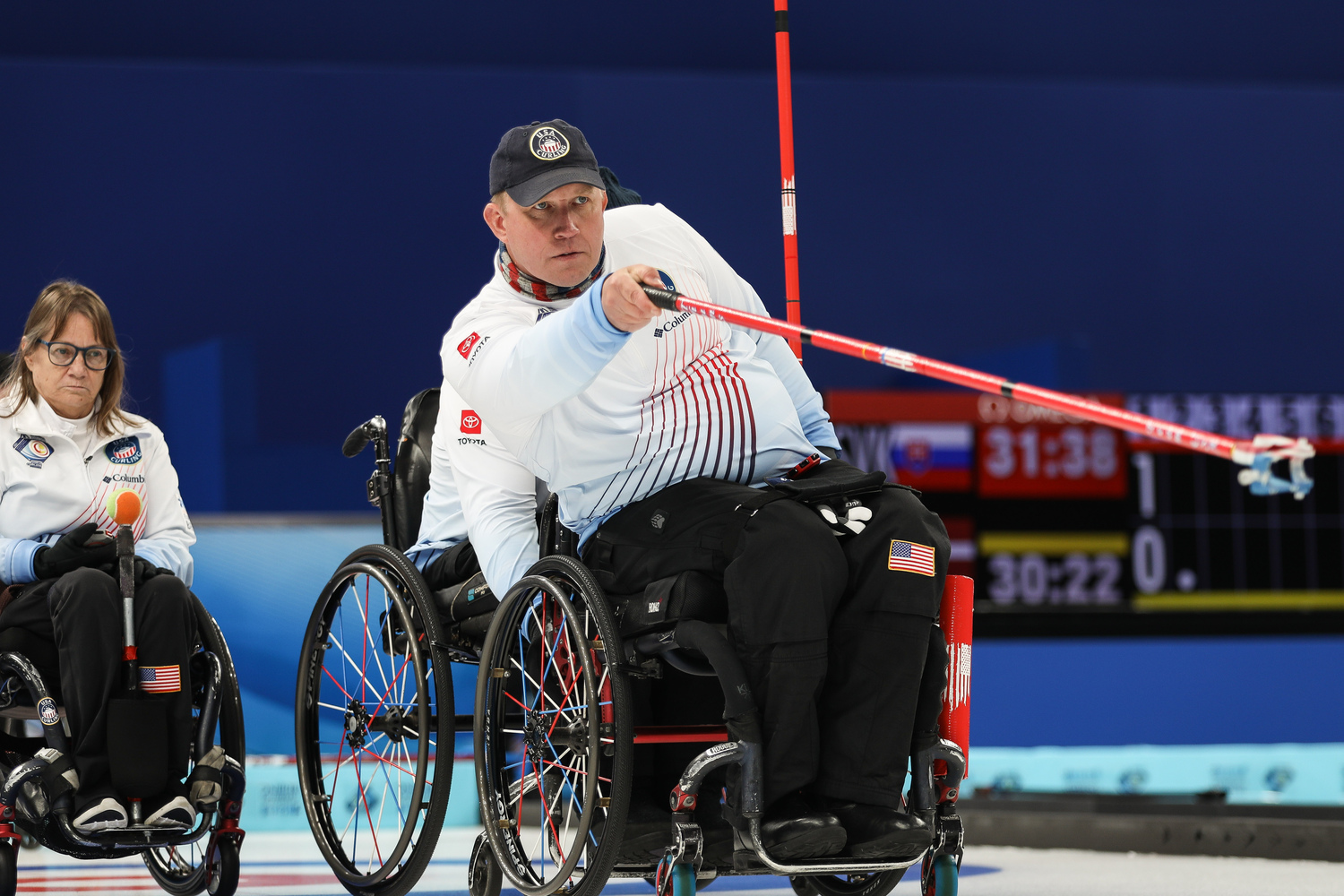 The second session of the KUNTAI World Wheelchair Curling Championship 2021 saw victories for United States, Sweden, Latvia and Norway on Saturday (23 October) evening in the Ice Cube in Beijing, China.

United States got a head-start to the North American battle by scoring two points in the first end then stealing a single point in the third end for the early, 3-0 lead.

In the fourth end, Canada got on the scoreboard, scoring two points, and reducing the deficit to 2-4. The teams then traded single points over the next two ends, each using their last-stone advantage.

The turning point came in the seventh end. In that end, with his second stone, United States third player, Stephen Emt played a perfect freeze onto a Canadian shot stone in the four foot, putting his team into scoring position.

Canada was unable to move that stone, and United States skip, Matthew Thums added another stone to scoring position with his last shot.

With these two points, United States led the game by 6-3, going into the eighth end. In that end, Canada could only score one point, giving United States the 6-4 win.

After the game, United States third player, Stephen Emt, “We feel great. Still a long week, you know, these tournaments are crazy. But we feel great right now, because we’ve put in the time and effort in the last year and a half. When we got relegated, we made the goal to come back and not just to show up but play some good curling and I think we did that tonight.”

Talking about his team, he added “I think we picked each other up. We all missed some crucial shots, but we didn’t allow the one shot to turn into two, turn into three, and that’s the one thing we were stressing this year. We’re a team, we are a family, we’re brotherhood, sisterhood, pick each other up. We’re not gonna be perfect, when one person’s off, having a bad day, makes a bad shot, just make sure that the next person does better than that and improves.”

Both Sweden and Korea debuted at this event when they faced each other in this session.

Sweden got off to a flying start, scoring three points in the first end. Korea then fought back, scoring one point in the second end and stealing single points in the next three ends.

In the sixth end with, Korea leading by 4-3, Sweden put together another big end, scoring three points.

In the seventh end, Korea was forced to take a single point, while in the eight end, Sweden put three points on the board for the third time in the game, eventually winning by 9-5.

Reflecting on Korea’s four consecutive single-point scores, Sweden skip Viljo Petersson-Dahl said “I think we were a little bit nervous, and didn’t really get the ice. We had some shots but we missed a few.

“I think it’s a game we should have won earlier than the last end. I think we pressured them almost every end, and when they started to miss a couple of key shots, we managed to get some reward.”

Latvia get first win against Slovakia

Both Slovakia and Latvia lost their opening game in the afternoon, and were looking to recover with a win. Slovakia made the first move towards victory, stealing a single point in the first end.

Latvia responded by scoring two points in the second end.

Slovakia put the first large score of the game on the board with three points in the third end, a feat that was matched in the fourth end by Latvia, giving them a 5-4 lead going into the break.

Latvia carried their momentum into the second half, stealing single points in the fifth and sixth ends.

In the last two ends the teams traded single points, resulting in an 8-5 win for Latvia.

Norway bounced back after the afternoon loss

Norway managed to recover from their disappointing loss in the afternoon session against Scotland.

In this session, Norway played Switzerland and took a 3-0 lead after two ends.

Switzerland scored a single point in the third end, before Norway responded with two points in the fourth end for a 5-1 lead at the half-time break.

In the second half, Norway stole two points in the fifth end, then another point in the sixth end to keep their momentum going. After which, Switzerland conceded with a final score of 8-1 in favour of Norway.