Round-robin concludes with wins for Canada, China, Korea and United States at the world wheelchair championship 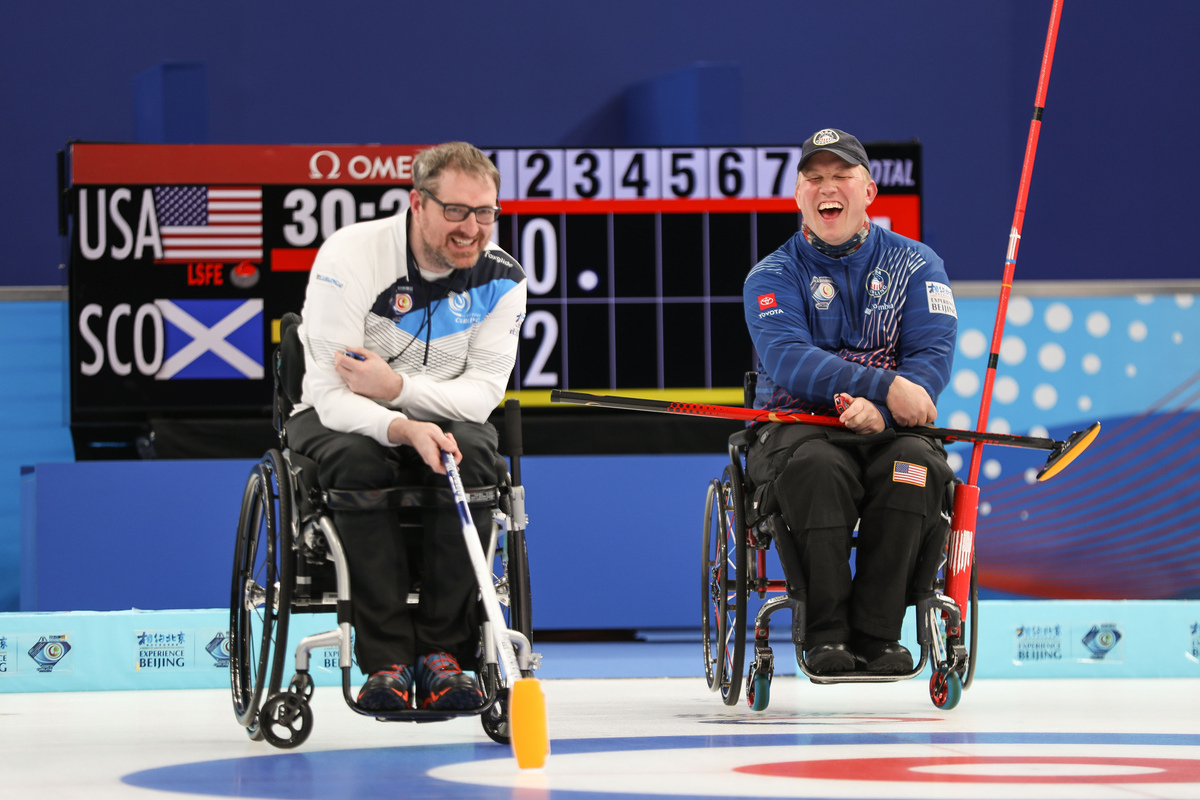 Day six of the Kuntai World Wheelchair Curling Championship 2021, taking place in the National Aquatics Centre in Beijing, China concluded with session 17 of the round robin and saw wins for Canada, China, Korea and United States.

Canada stole victory from Italy to finish fifth in the rankings

Canada already qualified for the play-offs prior to this game with six wins and four losses. Italy were looking to improve their 2-8 win-loss record and finish their championship on a positive note.

In the fifth end, Canada scored two points and narrowed the gap between the teams to a single point. Then, in the sixth end, Italy responded by scoring two points of their own.

Canada played an exceptional seventh end and scored three points to level the game at six going into the last end.

In the eighth end, Italy fourth player Paolo Ioratti’s last stone was too heavy and Italy gave up a steal of one point and Canada the 7-6 victory.

After the game, Canada skip Mark Ideson said “Italy had a really great game, they had the pressure on us the entire game. And kudos to them. They made it really tough. We just kind of got lucky in the last that he missed his last shot. So we’re happy to get the W and move on to the play-offs.”

Both United States and Scotland had previously qualified for the play-off stage before this session and were looking to end their round-robin with a victory.

United States put a single point on the board in the first end and Scotland replied with two points of their own in the second end.

United States put together an excellent fifth end, scoring three points and widening the gap between the teams to four points.

In the sixth end, Scotland scored two points of their own and in the seventh end, United States scored a single point before Scotland out of stones in the eighth end for the 8-5 win.

China faced Sweden in the final session and both sides had already secured their play-off places with a record of eight victories and collecting two losses.

In this game, China stole a single point in the first end when Sweden skip Viljo Petersson-Dahl rolled out with his hit-and-stay attempt on his last stone.

In the second end, Sweden scored a single point back to level the game.

In the third end, China scored two points before forcing Sweden to take another single-point score.

In the fifth end, China scored a single point, and they took a two-point lead the second time in the game.

Sweden blanked the sixth end looking for a multiple-point end, but were forced to take a single point in the seventh end. Then, in the eighth end, Sweden managed to steal a single point when China skip Wang Haitao rolled too far with last his take-out stone, taking the game to an extra end.

In the extra end, Sweden’s Petersson-Dahl came up short with his freeze attempt, which meant that China won the game, by 6-4, without needing to throw their last stone.

After the game, China second, Sun Yulong said “I think team Sweden is a really strong team. We needed to focus till the very last minute of the game. We just told each other we need to cooperate well and we can’t be distracted. We worked with each other well. I think the turning point was in the third end, when we scored two points.”

Korea claim fourth win of the championship over RCF

Prior to this game, RCF already qualified for the play-offs with an 8-2 win-loss record, while Korea were sitting with a 3-7 win-loss record and were looking to pick up their fourth win of the tournament in their last game.

Korea got on the scoreboard with a single point in the first end, then added one more point in the second end, when RCF skip Konstantin Kurokhtin was unsuccessful with his take-out attempt.

RCF scored a single point in the third end, before Korea put together an excellent fourth end where they scored three points to take a 5-1 lead into the break

In the fifth end, Korea stole another point when Kurokhtin wasn’t able to remove the Korean stone from the eight-foot with his promotion take-out attempt.

Before the sixth end, RCF made a line-up change and for the remainder of the game, Andrei Meshcheriakov threw skip stones.

In the sixth end, Korea stole another point when Meshcheriakov was heavy with his last draw shot.

RCF manufactured a three-point score in the seventh end and narrowed the gap between the teams to three points.

In the eighth end, Korea scored a single point to win the game, by 8-4.

After the game, Korea coach, Seungmin Kim said “It was our last game. We didn’t expect anything, we just calmed down, therefore, we could play well. It was our first time going to a foreign country and participating in a tournament like this. We really struggled for many games, but we hope that through this experience we can improve and develop our abilities for the future.”

The play-off stage of the championship begins tomorrow (Friday 29 October) afternoon at 14:05 and will feature Sweden versus Scotland in the 3v6 Qualification Game, with the winner progressing to face RCF in the semi-final stage.

In the 4v5 Qualification Game that will take place at the same time, United States will face Canada. The winner of this game will play China in the other semi-final.

China and RCF received a bye into the semi-final stage after finishing ranked one and two in the standings.

Q = Qualified for the play-off stages