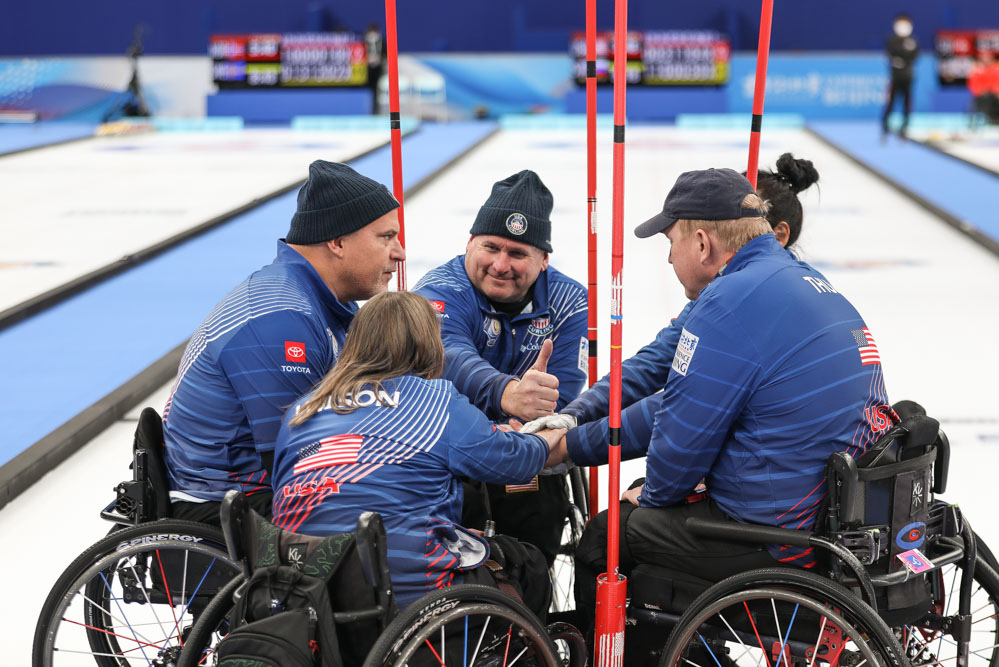 Day six of the Kuntai World Wheelchair Curling Championship 2021, taking place in the Ice Cube in Beijing, China continued with session 16 of the round robin and saw wins for Canada, United States, Sweden and Switzerland.

Going into this game, Canada were looking for their sixth win of the championship and Latvia were seeking their fifth victory. Canada blanked the first end and scored a single point in the second end. They stole one point in the third end when Latvia fourth player Agris Lasmans wasn’t successful with his double take-out attempt.

Latvia scored their first point of the game in the fourth end and the teams went into the half-time break with Canada leading by a score of 2-1.

In the fifth and sixth ends, the teams exchanged single points to make the score 3-2 in favour of Canada after six ends.

In the seventh end, Canada put many stones in play and scored three points to lead the game by 6-2 before the last end. Canada eventually ran Latvia out of stones in the eighth end to make 6-2 the final result and to earn a spot in the play-offs.

After the game, Canada skip Mark Ideson said “I think we are at the point in the tournament where we control our own destiny. We needed to win our last couple to give ourselves a chance at the play-offs. Latvia gave us a good game, but we’re happy to get that win and go into this evening’s game with a little bit of confidence. We were just trying to be patient. One of the themes of the week is try not to get ourselves in too much trouble. So we just tried to be patient and wait for our opportunities and take advantage of them when we can.”

United States claim seventh win of the week over Slovakia

United States went into this game knowing that a victory would mean qualification to the play-off stage. Slovakia were looking to improve on their 3-8 win-loss record in this game.

Slovakia opened the scoring with a single point in the first end and followed it up by a steal of one point in the second end when United States skip Matthew Thums was unsuccessful with his take-out attempt.

Slovakia played an excellent sixth end, resulting in a score of three points. The teams went into the seventh end tied at five.

United States played an exceptional seventh end to score four points and take a four-point lead before the last end. In the eighth end United States ran Slovakia out of stones, making 9-5 the final result.

After the game, United States alternate Pamela Wilson reflected on qualifying for the play-off stage saying “We feel fantastic! This team, it has worked so hard this last year to really try to solidify ourselves, build our skillset up, become a family, work really hard, work on our strategies, we’re ready for this game.”

Switzerland picks up second win of the tournament by beating Korea

Switzerland aimed at finishing their championship on a good note, recording their second win in their last game. Korea were seeking their fourth victory of the tournament with one more game for them to play in the last round-robin session.

Korea stole the first end, when Switzerland skip Eric Decorvet was heavy with his last stone draw attempt. Then, in the second end, Switzerland scored two points of their own.

Korea scored a single point in the third end, levelling the score at two each. In the fourth end, Korea stole a single point to take a 3-2 lead going into the break.

In that end, Switzerland stole a single point when Korea skip Jang Jaehyuk was not successful with his take-out attempt to remove the Swiss shot stone. This single-point steal gave Switzerland a 7-4 win and they claimed their second victory of the week.

Sweden, who already qualified for the play-off stage prior to this session, faced Norway, who needed a win to keep their play-off hopes alive.

Norway put the first point on the scoreboard in the first end, and Sweden responded to it with a single-point score of their own in the second end.

Norway scored a single point in the sixth end, before Sweden put another two points on the board in the seventh end. After this Norway conceded defeat with the final result 9-2, to Sweden.

After the game, Sweden skip Viljo Petersson-Dahl said “We really wanted to win this game and beat China next, so it was a very important game for us. I think we pressured them in every end almost, so we didn’t give anything away today, and that was our game plan. And the whole team contributed, we played very well. So I’m really satisfied.”

Q = Qualified for the play-off stage