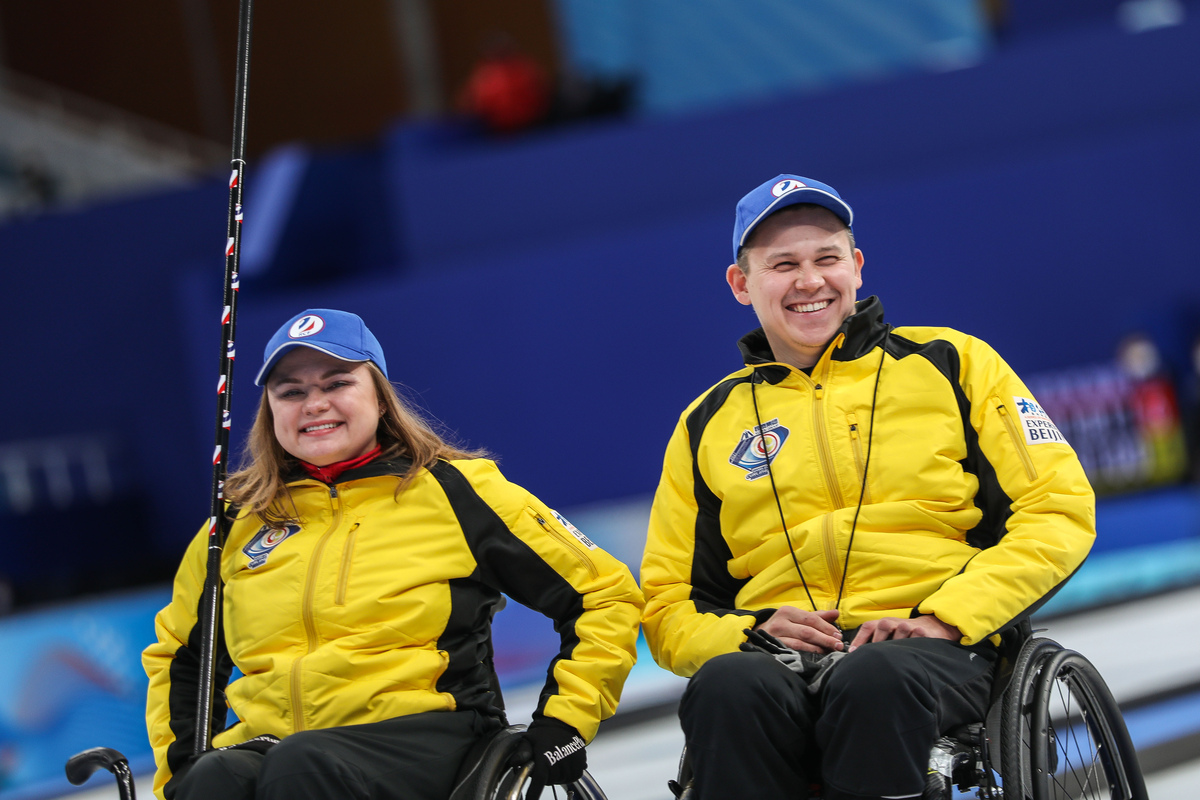 Day six of the Kuntai World Wheelchair Curling Championship 2021, taking place in the National Aquatics Centre in Beijing, China began with session 15 of the round robin and saw wins for China, RCF Latvia and Slovakia.

Extra-end win for China qualifies them for the play-offs

Both China and Norway lost their last game, China were beaten by Scotland, while Norway were defeated by Korea in the previous sessions.

After blanking the first end, China scored a single point in the second end. In the third end, Norway responded with a single point of their own to equal the game at one after three ends.

In the fourth end, Norway stole two points when China skip Wang Haitao was unsuccessful with his double take-out attempt.

In the fifth end, China scored two points to level the game, then stole a single point in the sixth end to take back the lead, by 4-3.

Norway blanked the seventh end to keep the hammer, going into the last end. In the eight end, a measure was needed to decide the shot stone. As it was a Norway stone, the game went into an extra end.

In that ninth end, China put lots of stones in play. Norway skip, Jostein Stordahl, faced four China counters when throwing his last stone. As his draw attempt was heavy, China scored four points to win the game, by 8-4.

Reigning world champions, RCF played with both their female players in their line-up for the first time in this competition and they pulled out a perfect performance over Switzerland.

After the game, RCF skip Konstantin Kurokhtin said: “Today, our line-up of two girls and two boys worked well. Daria is an old player in my team, Olga is a new player, but she is very hard-working. I like how she plays. I think my girls will have a great future in this sport.”

In this game, Latvia were looking for their fourth victory of the week, while Italy were seeking their third win.

Latvia capitalised on the hammer early, scoring two points in the first end. They added one more point to their name on the scoreboard in the second end, when Italy fourth player, Paolo Ioratti rolled too far with his hit-and-stay take-out attempt, giving up a steal of one point.

Italy blanked the third end and scored a single point in the fourth end. In the fifth and sixth ends Italy stole single points from Latvia, equaling the score at three, going into the seventh end.

In the seventh end, Latvia scored a single point, and led the game by one point, going into the last end without hammer.

In the last end, Latvia managed to steal a single point when Ioratti was heavy with this last stone, giving Latvia the victory, by 5-3.

Prior to this game, Scotland were sitting in fourth position of the standings with six wins and three losses, while Slovakia were second-to-last in the standings, with a 2-7 win-loss record.

In the first two ends, the teams traded single points with hammer. In the third end, Slovakia managed to score two points, and led the game by 3-1 after three ends.

In the fourth end, Slovakia stole a single point when Scotland skip Hugh Nibloe was unsuccessful with his difficult raise take-out attempt, trying to remove the Slovak stone from the four-foot.

In the fifth end, Slovakia stole another point when Nibloe missed his take-out attempt. In the sixth end Scotland scored two points to reduce their deficit to two points.

Then, in the seventh end, Slovakia scored three points, after which Scotland conceded defeat with the final score of 8-3 in favour of Slovakia.

After the game, Slovakia skip Radoslav Duris said “We need every single win. We have one more game to play, and we hope we can climb up on the standings.”

Lead Monika Kunkelova added “My feelings are amazing. Finally we have a win. We really needed it. The key to our win today was our will to win and our concentration on every single throw.”

Q = Qualified for the play-off stage