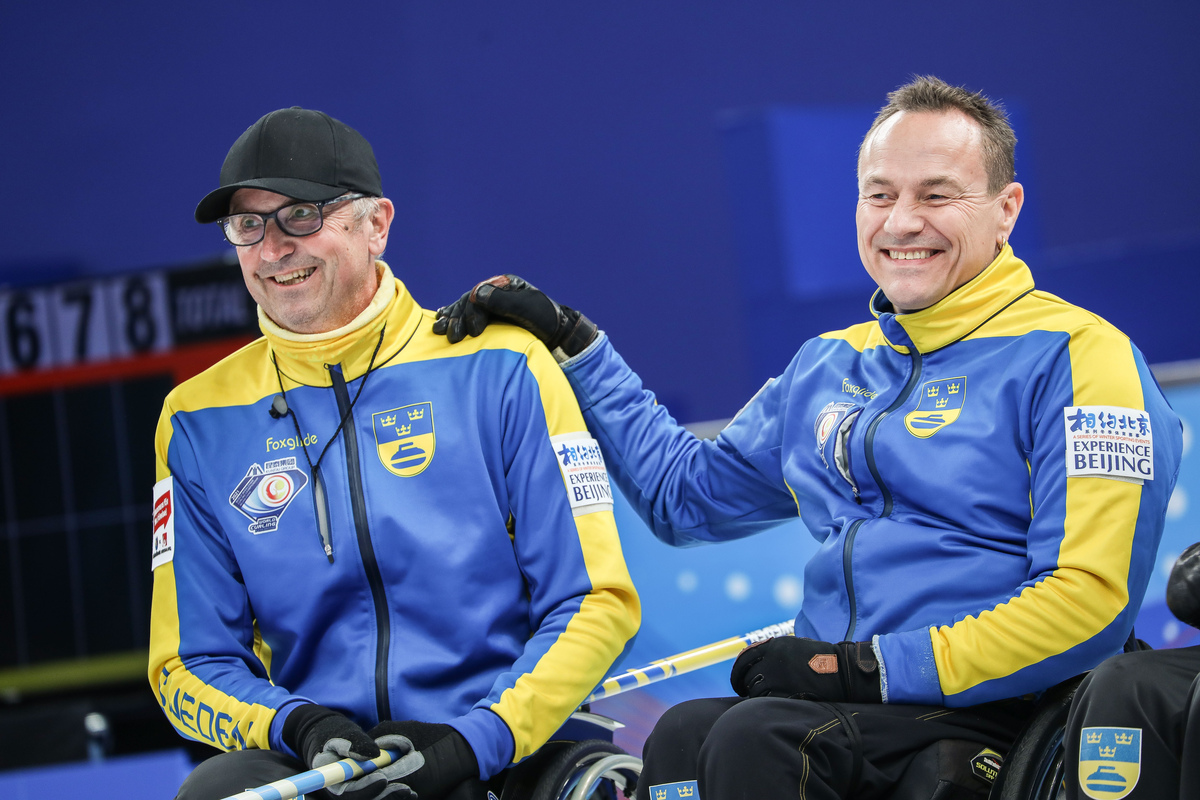 Day five of the Kuntai World Wheelchair Curling Championship 2021, taking place in the Ice Cube in Beijing, China concluded with session 14 of the round robin and saw wins for Canada, Korea, Sweden and United States.

Both Sweden and Switzerland claimed a victory earlier in the day and both teams were looking for a second victory in this session.

Sweden started the game by scoring a single point in the first end. In the second end, they stole two points after Switzerland fourth player Hans Burgener was unsuccessful with his take-out attempt.

In the third end, Switzerland got on the board by scoring a single point. Then, in the fourth end, Sweden scored two points back and the teams went into the break with Sweden leading, by 5-1.

In the fifth end, Sweden stole another two points when Burgener was unsuccessful with his take-out attempt. In the sixth end, Switzerland scored a single point, then conceded, giving Sweden the 7-2 victory.

After losing their last two games, United States were very much looking to get a win over Latvia, who were sitting with a 5-3 win-loss record prior to this session.

United States had a flying start to the game, scoring one point in the first end, and then stealing five points over the next three ends to lead the game by 6-0 going into the break.

United States kept their momentum in the second half of the game and put another steal of three points on the board in the fifth end, when Latvia fourth player, Agris Lasmans was unsuccessful with his take-out attempt.

In the sixth end, Latvia scored two points, after which they conceded defeat with the final score 9-2 in favour of United States.

After the game, United States skip Matthew Thums said “We talked about staying together, making our shots, playing as a team. We needed to keep our tempo up, our enthusiasm up the whole game. We haven’t been doing that lately. We’ve been getting down a few ends, we’ve kept our tempo up, we’ve made our shots, we won the game, it feels great.”

Going into the game, Norway was seeking their second win of the day and sixth win overall, while Korea hoped to improve on their 2-6 win-loss record.

Korea blanked the first two ends and took a single point in the third end. In the fourth end, Korea stole a single point, when Norway skip Jostein Stordahl was unsuccessful with his promotion take-out attempt to remove the lone Korean stone from the button.

In the fifth end, Norway got on the board by scoring a single point. But in the sixth end, Korea responded with the first multiple-point score of the game, two points.

In the seventh end, Korea stole two points when Stordahl’s promotion take-out attempt with his last stone was not successful. After seven ends, Norway conceded defeat, giving Korea a 6-1 win.

After the game, Korea skip Jang Jaehyuk said “We were struggling in the previous games, but in this game, the team was very good. The team members played their best. I hope to keep winning. The key to our win was the players’ concentration, it was really good.”

Canada registers second win of the day over Slovakia

In this session, Canada were looking for their second victory of the day as they won over Korea in the morning session. Slovakia, however, were seeking their first win of the day after a loss against Norway in the afternoon.

Slovakia held the hammer in the first end and by blanking it, brought their last-stone advantage into the second end. In that second end, Canada stole a single point from them, when Slovakia fourth player, Peter Zatko was heavy with his last shot.

In the next two ends, Canada stole another five points and went into the break with a 6-0 half-time lead.

In the fifth end, Canada stole another two points, increasing their lead to 8-0 going into the sixth end.

In that sixth end, Slovakia got on the scoreboard with two points and they followed it up with a steal of a single point in the seventh end to narrow the gap between the teams. However, the five-point deficit was too much for Slovakia, who conceded defeat to give Canada the 8-3 win.