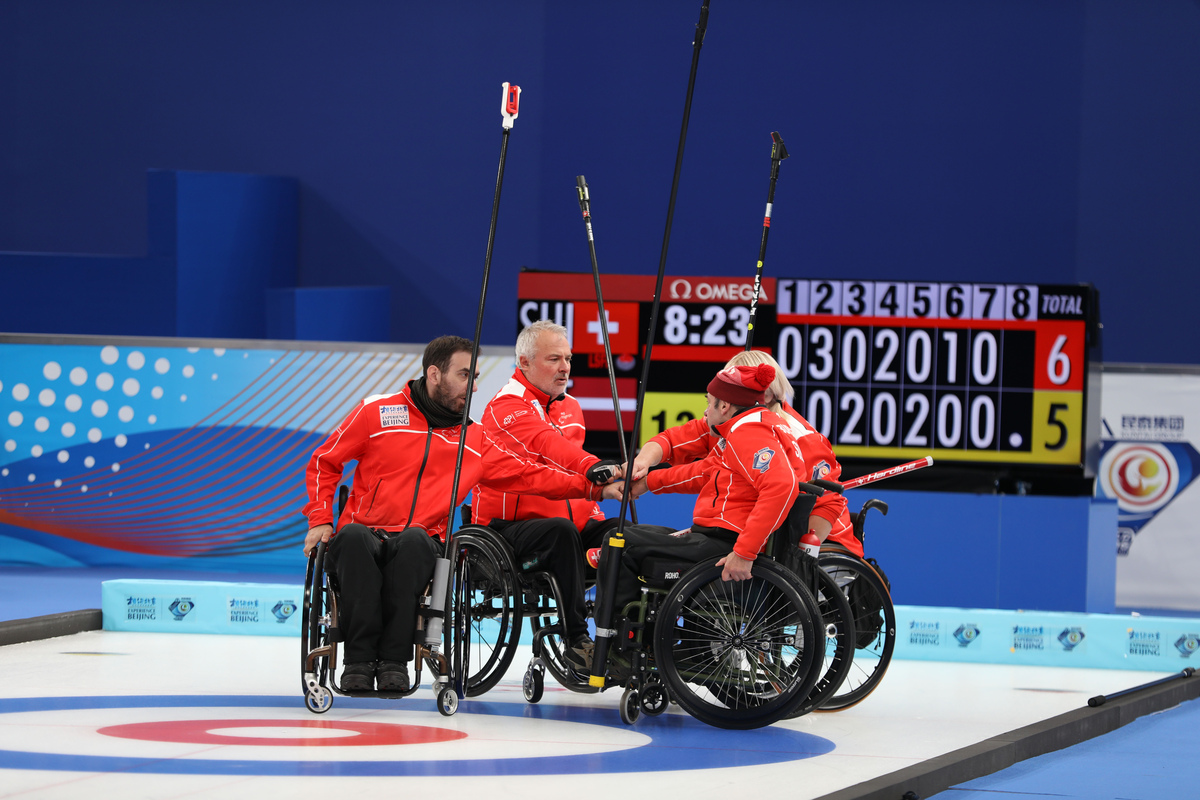 Day five of the Kuntai World Wheelchair World Championship 2021, taking place in the National Aquatics Centre in Beijing, China continued with session 13 of the round robin and saw wins for Switzerland, Scotland, Norway and RCF.

Switzerland were looking for their first win of the week after registering seven losses prior to this session. Latvia were seeking their fourth victory to balance their win-loss record, as they administered four defeats earlier this week.

Switzerland held the hammer, but Latvia managed to steal a single point in the opening end. In the second end Switzerland scored three points and took a 3-1 lead.

Over the next three ends, the teams traded two-point scores with hammer, which resulted in a 5-5 tie after five ends. Then, in the sixth end, Switzerland scored a single point to retake the lead.

Latvia blanked the seventh end and kept the hammer going into the last end, trailing by one point. In that last end, Latvian fourth player Agris Lasmans was unsuccessful with his take-out attempt with his last stone, giving up a steal of one point and handing Switzerland their first victory of the week, by 7-5.

After the game, Switzerland skip Francoise Jaquerod said “Going into the game, we were confident, because yesterday we played against China and it went really well. Today, we had good stones, so we just told ourselves, ‘why not today’. From arriving at the rink, we felt this confidence and we had some good stones as well.”

Scotland edges out China in a low-scoring game

In this game, China were seeking their seventh victory of the week, while Scotland were looking to improve their 5-3 win-loss record.

In the fourth end, China stole a single point when Scotland skip Hugh Nibloe came up short with his draw attempt to outscore the China stone on the four-foot. The teams went into the break with China leading, by 2-1.

Scotland led by a 3-2 score, going into the last end and with the last stone of the game in the eighth end, Wang played a take-out on the lone Scotland stone in the house and attempted to stay in its place. He, however, rolled out of the house, blanking the end, and making 3-2 the final result of the game in Scotland’s favour.

After the game, Scotland second player David Melrose said “It was a really exciting game. Very tight, very close, both teams played really-really well. There was a bit of nip and tuck between us, but it was a well-ended end and win.”

Norway victorious over Slovakia to take fifth win of the week

The day before this session Norway collected two victories, from last year’s finalists, Canada and RCF. They were looking to continue the winning streak against Slovakia.

Norway opened the scoring with a single point in the first end, and Slovakia responded with two points in the second end. In the third end, Norway put another point on the board to level the score at two, going into the fourth end. In that end, Norway played an exceptional draw game which resulted in a steal of four points, after Slovakia fourth player Peter Zatko was unsuccessful with his take-out attempt.

After the break, Norway stole another two points in the fifth end, and Slovakia responded with a two-point score in the sixth end.

Norway was leading the game by 8-4 going into the seventh end, but in that end, Slovakia stole two points, after Norway skip Ole Fredrik Syversen missed his take-out attempt with his last stone.

In the eighth end, Norway eventually ran Slovakia out of stones, making the final score, 8-6 to Norway.

In the last game of the session, reigning world champions, RCF, were facing Italy.

RCF started the game by stealing two points in the first end, when Italy fourth player, Egidio Marchese came up short with his last stone against two RCF counters.

Over the next two ends, the teams exchanged single-point scores with hammer. In the fourth end, RCF stole another two points, when Marchese was only partly successful with his double take-out attempt, giving up a steal of two points.

In the fifth and sixth ends, RCF stole single points. The teams went into the seventh end with a 7-1 score and Italy holding the hammer. Marchese rolled out of the house with his take-out attempt with his last stone, blanking the end. After the seventh end, Italy conceded defeat giving RCF a 7-1 win.