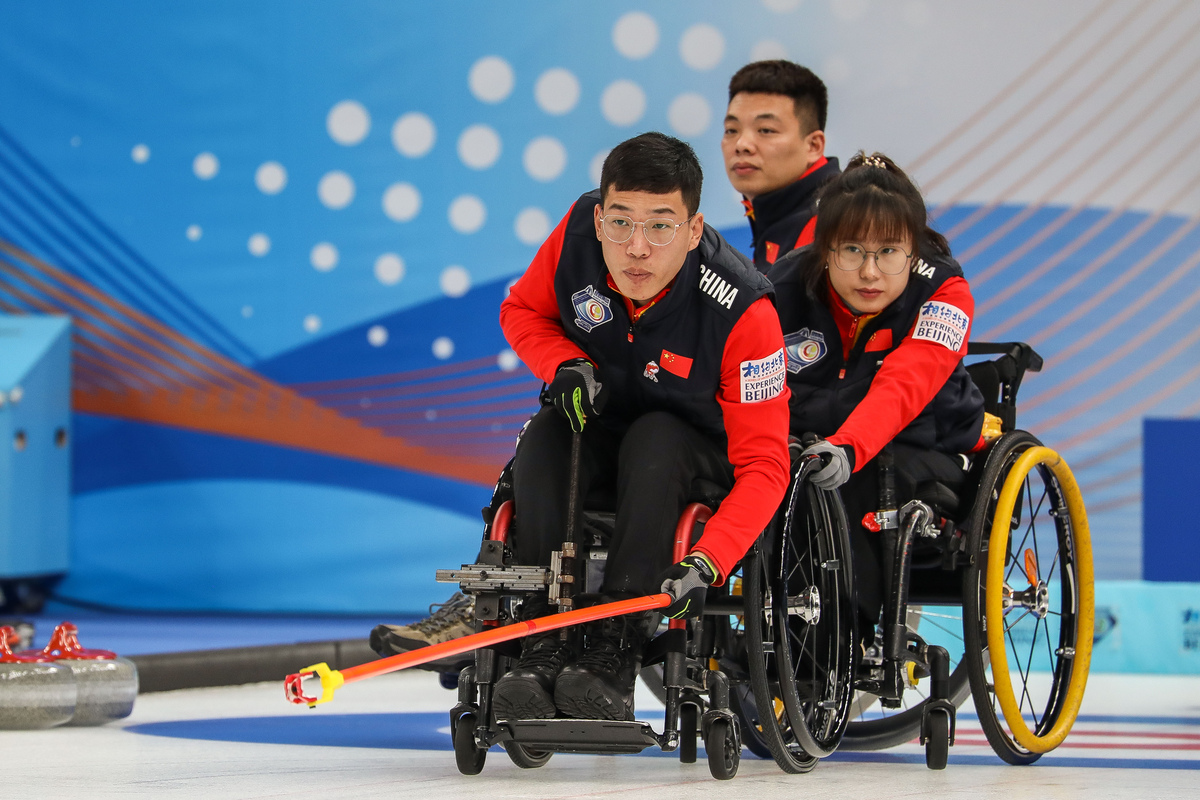 Session 11 of the Kuntai World Wheelchair World Championship 2021, being held on Tuesday (26 October) evening in the Ice Cube in Beijing, China saw wins for China, Norway, Italy and Scotland. With their win, China top the standings with six wins and one loss.

Going into the game, China was looking for their sixth victory of the week, while Switzerland was seeking their first win.

The game started with a single-point steal for China in the first end, when Switzerland fourth player, Hans Burgener missed his take-out attempt to remove the sole China stone in the house.

In the next two ends the teams traded single points with hammer. Then, in the fourth end, China stole three points, when Burgener came up short with his last draw facing three China counters.

The teams exchanged single-point scores over the next two ends, after which China led, by 6-2. In the seventh end China stole another point, after which Switzerland conceded defeat with a 7-2 final result.

Norway triumphant over RCF after an exceptional final end

The reigning world champions, RCF were looking to collect their sixth win this week in their seventh game, while Norway were to improve on their 3-3 win-loss record.

Norway started the game by scoring two points in the first end to capitalise on their last-stone advantage.

Norway scored a single point in the fourth end, and the teams went into the break with a tie at three.

RCF blanked the fifth end to keep the hammer and took advantage of it in the sixth end, scoring two points. After six ends, RCF was leading the game by 5-3. In the seventh end, RCF stole a single point after Norway skip and fourth player, Ole Fredrik Syversen didn’t succeed in removing the RCF counter from the four-foot.

RCF had a three-point lead going into the eighth end, but Norway held the hammer. Norway played a highly precise draw game in that end, while RCF missed multiple take-outs. Norway manufactured a four-point score which resulted in a 7-6 victory.

Italy bounces back from tough loss versus Slovakia

In the afternoon session of the day, Italy had a tough extra-end loss against Korea. In this session, they bounced back with an 8-1 win over Slovakia.

Italy capitalised on their last-stone advantage in the first end, scoring two points. In the next three ends they went on a stealing streak that resulted in a 6-0 half-time score in Italy’s favour.

After the break, Slovakia were looking to put their first points on the board, and decided to blank the fifth end. Then, in the sixth end, Italy stole two points when Slovakia skip, Radoslav Duris was unsuccessful with his take-out attempt.

In the seventh end, Slovakia scored a single point and then conceded defeat, giving Italy an 8-1 victory.

After the end, Italy skip Angela Menardi said “I feel free! We didn’t play so badly in our earlier games, but we were very-very unlucky. We played really badly once, but except for that one time, we were on a similar level to our opponent. Just unlucky for us. So, it was time to win!”

Both teams registered a defeat from Sweden earlier in the day and were looking to recover with a win in the evening session.

Latvia started the game well, stealing a single point in the first end.

In the second end, Scotland found their A game, scoring two points. From this end on, they never looked back and stole the next four ends. After six ends, the score was 10-1 in Scotland’s favour, when Latvia conceded defeat.

After the game, Scotland third player, Gregor Ewan said “After our defeat this morning, we had a debrief with Sheila and we knew we had to win this game. It was the case of come out, play the shots and from the very start we were making shots. It makes the game so much easier when you’re making shots. And makes you feel good, scoring ends, everything has gone right and continued all the way to the end.”

Scotland lead Meggan Dawson-Farrell added “Coming out with our loss this morning and coming out with a win tonight, it’s an amazing feeling and just onto the next one, keep going.”