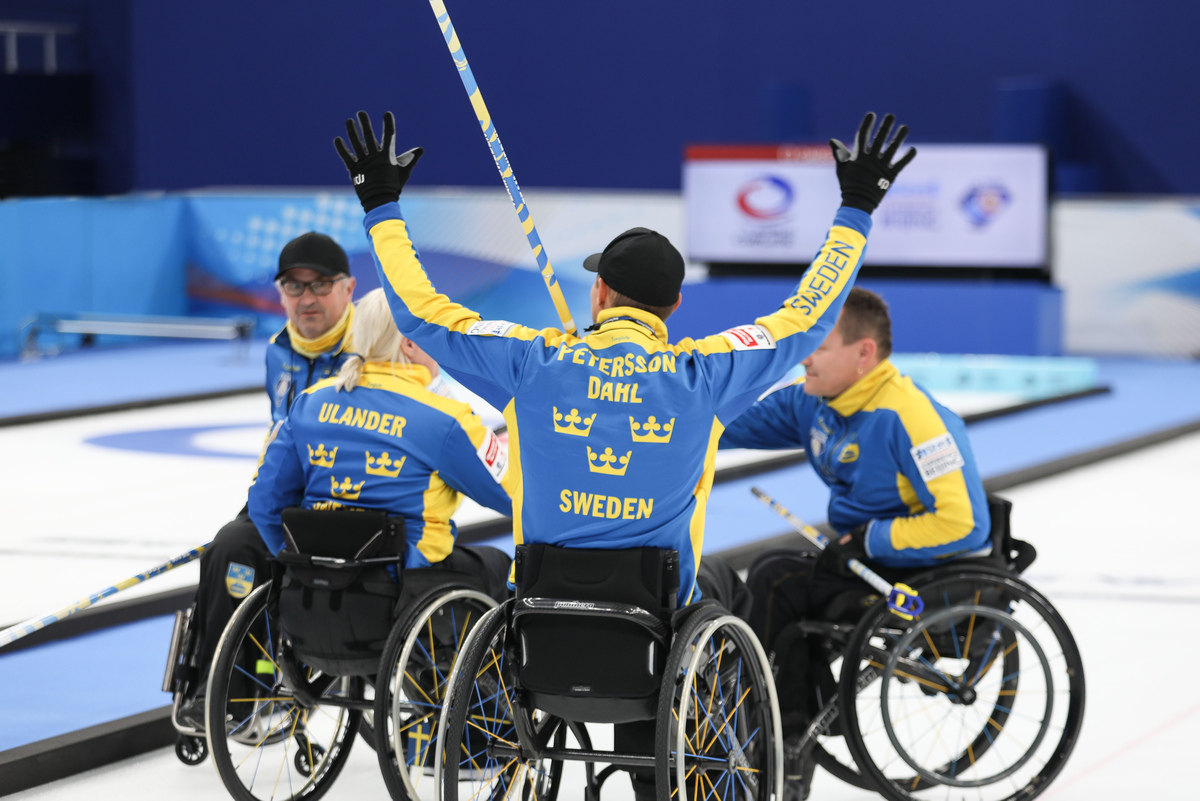 Day seven of the Kuntai World Wheelchair Curling Championship 2021, taking place in the Ice Cube in Beijing, China began with two Qualification Games to decide which two teams join China and RCF in the semi-finals.

Sweden got on the board in the first end by scoring two points. In the second end, Scotland’s fourth player Gregor Ewan was heavy with his last stone draw attempt and gave up a steal of two more points for Sweden. Sweden stole the next two ends, by a single point and two points, respectively.

After the game, Sweden skip Viljo Petersson-Dahl said “I just want to celebrate with the team! I think we made our shots the whole game, and Scotland didn’t. They had to have a couple of difficult shots and they didn’t manage to get them, so we stole point after point. That’s not good for them psychologically.”

Sweden will play RCF in one semi-final.

After blanking the first end, United States got on the scoreboard in the second end, by scoring two points.

Canada responded in the third end with a single point. Then, in the fourth end, United States scored another single point, and the teams went into the half-time break with United States leading by a 3-1 score.

In the fifth and sixth ends, the teams traded single-point scores with hammer, then in the seventh end, Canada manufactured a two-point score, partly due to two excellent take-out shots by fourth player, Jon Thurston.

After seven ends, the score was level at four, going into the last end. In the eighth end, Thurston was unsuccessful with his raise take-out attempt with his last stone, and it led Canada to concede defeat with two United States counters in the house, with United States winning, 6-4.

United States will play China in the other semi-final.

After the game, United States third played, Stephen Emt said “We believed in ourselves from day one a year and a half ago. You know, we were relegated, and we made it a goal of ours to get back here and we had a couple of goals this week, checked them off and the next one is a medal. So we keep on fighting no matter what the score is and we’d battle with anybody in the world. I couldn’t have been prouder of my team.”

United States skip, Matthew Thums added “Everybody did a hundred percent today. I put the broom down, I asked for the weight, they hit it, every single shot. I couldn’t be prouder of my team. They’ve set it up and all I had to do, bring it home. It was a beautiful thing to watch. We’ve got two more games. One more game tonight and one more game tomorrow, we wanna finish strong. Win our last game.”