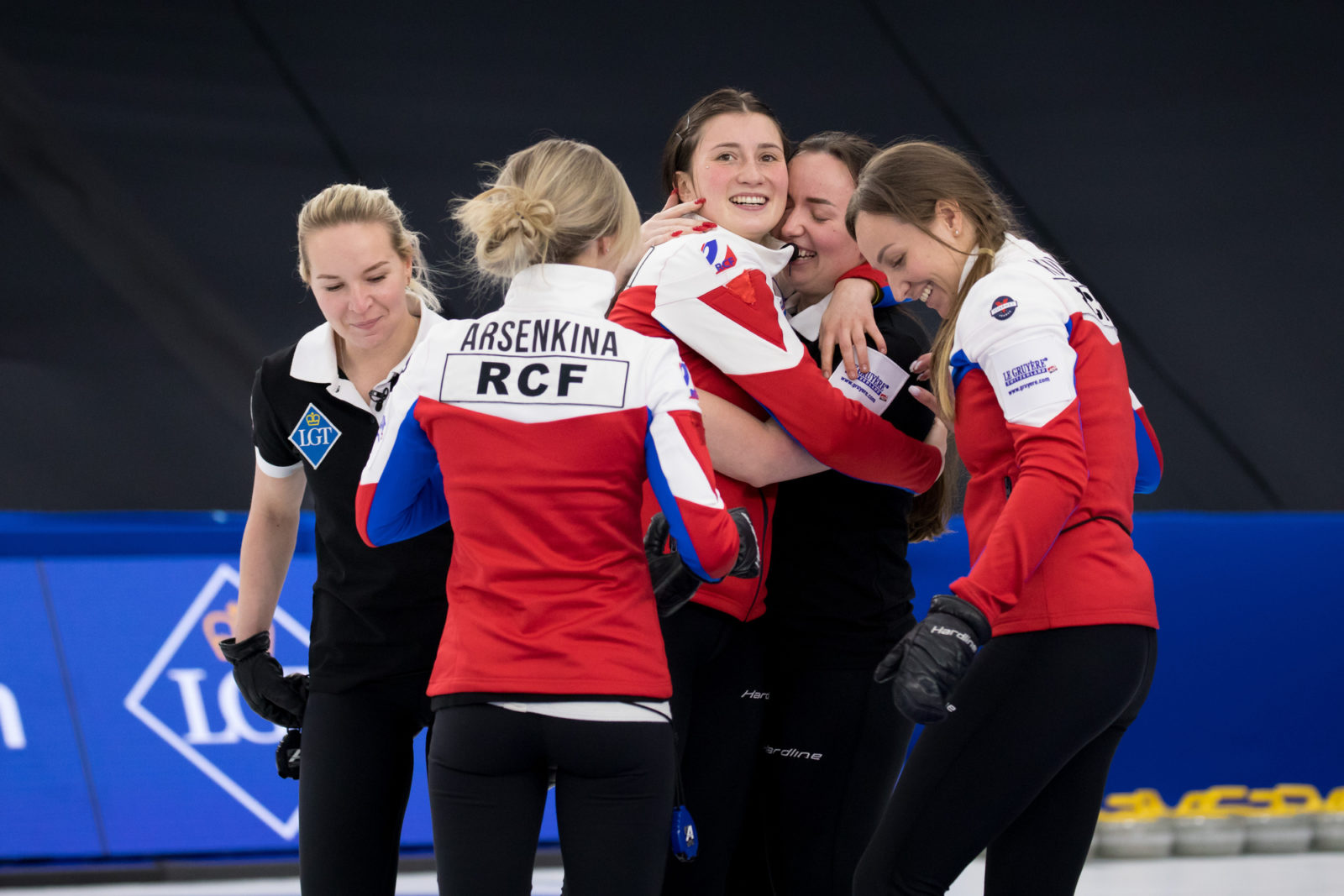 Olympic champions, Sweden faced RCF in the second semi-final of the LGT World Women’s Curling Championship 2021 in the WinSport Arena at Canada Olympic Park in Calgary on Saturday (8 May) evening, aiming to join Switzerland in Sunday (9 May) afternoon’s gold medal final.

RCF began the game with the last stone advantage and used that to blank a cagey first end. Then in the second end, when trying to hit-and-stay for two points, RCF skip Alina Kovaleva was slightly wide with her hit and rolled out, only scoring a single point.

In the third end, Sweden skip, Anna Hasselborg, faced two RCF stones when she settled into the hack. Hasselborg made the double take-out to remove both RCF stones, but also lost her shooter, scoring a single point to tie the game.

The game took a large swing in RCF’s favour in the fourth end. With her last stone, Hasselborg was facing five RCF shot stones. An attempted triple take-out of the three centre stones, only cleared two stones, while the shooter rolled out of the house. This left RCF skip, Kovaleva, with an open draw to the house for a score of four points and the 5-1 lead.

In the fifth end, Sweden found themselves in trouble once again with a RCF shot stone buried behind several guards. Hasselborg, tried a difficult angle-raise with her final stone, but over curled early to give up a steal of one point to increase RCF’s lead to 6-1 at the fifth end break.

The sixth end saw RCF continue to apply pressure with their early stones, but a few mistakes from the back end, and some difficult shots made by Sweden, left Hasselborg with a draw for three points to bring Sweden back into the game, trailing 4-6.

Hasselborg, with her last stone, played a freeze to force Kovaleva to draw to the button to score a single point in the seventh end.

Then in the eighth end, Sweden engineered an open draw to the button to score two points and reduce their deficit to a single point, trailing 6-7 going into the ninth end.

RCF were forced to draw for a single point in the ninth end, taking a two-point lead into the tenth end, but giving up last stone advantage to Sweden.

However, RCF filled the house full of stones in the tenth end, then with Hasselborg’s first stone, she played a hit-and-roll off a wide RCF stone to sit in the four-foot ring and shot stone. Kovaleva, with her final stone of the end, clipped a guard when attempting to draw to the four-foot but left her shooter in the 12-foot ring as a guard.

Hasselborg, with her final stone played a raise double take-out to clear two RCF stones in the eight-foot ring, but had the shooter roll too far, giving Sweden a score of one point.

RCF hold on for the 8-7 victory and move on to the gold medal final against Switzerland, while Sweden will face United States for the bronze medals.

Afterwards a delighted RCF skip, Alina Kovaleva said: “We got that advantage and we just needed to keep it going and hold it for the win. It was quite difficult [holding the lead against Sweden] as you can see by the scoreboard, but we defended more and this was why the score was closer towards the end, but thanks to my team, we kept going and we did it.”