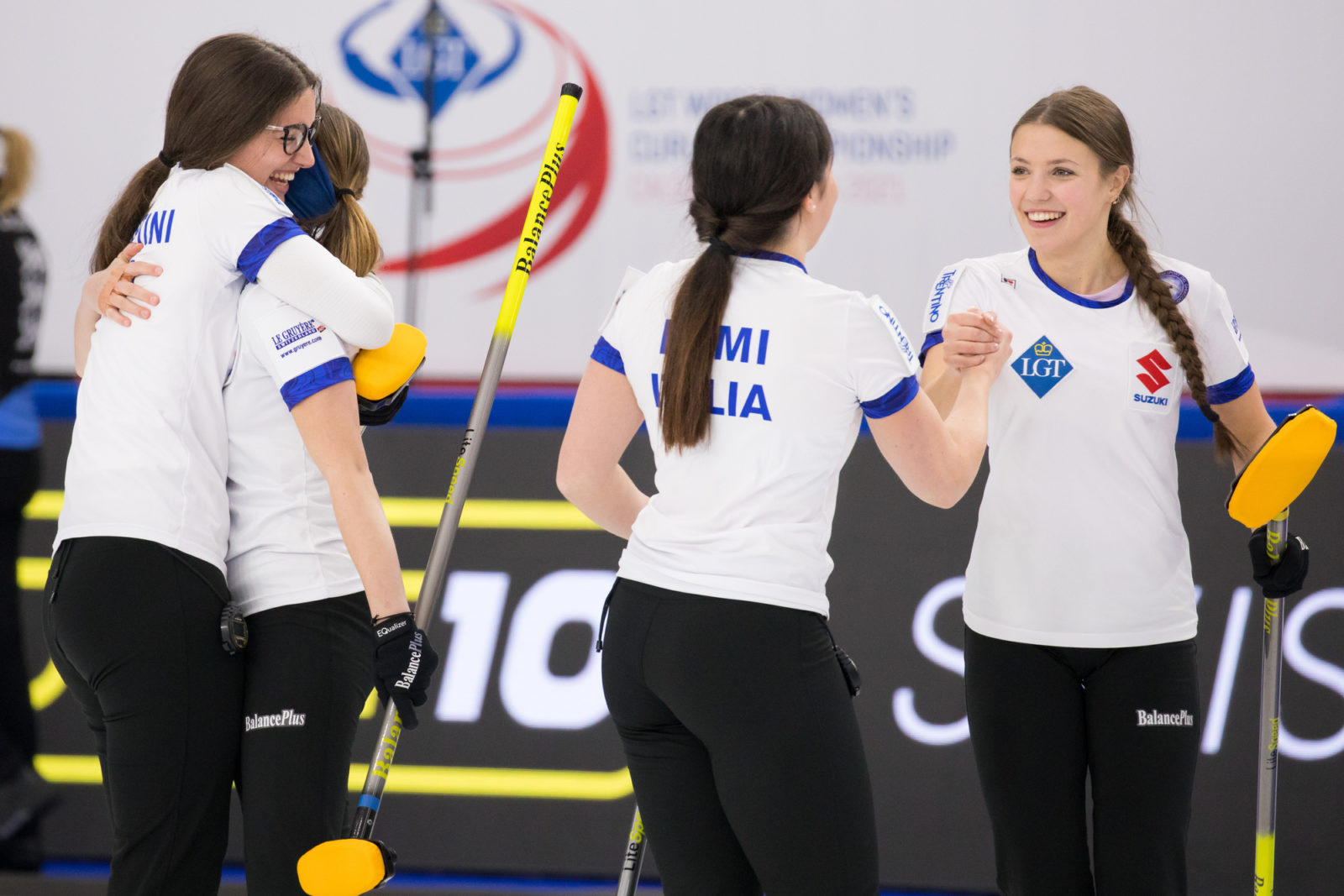 After a postponed seventh session of round-robin play due to a number of COVID-19 positive results within the broadcast team yesterday, the eighth session began 30 minutes later than originally scheduled, with no TV cameras in the WinSport Arena at Canada’s Olympic Park in Canada.

When the teams were able to take to the ice, Italy secured their first win of the LGT World Women’s Curling Championship 2021 in the delayed eighth session of round-robin play when they fought back to defeat Germany 10-6.

Germany led 4-2 at the fifth end break, then increased that lead to 6-3 after seven ends. However, in the eighth end, Italy filled the house with yellow stones, then with skip Stefania Constantini’s last stone played a hit and stay for five points and the 8-6 lead.

An Italian steal of two points in the ninth end after Germany’s Daniela Jentsch was light on a draw with her final stone put the game beyond Germany’s reach, giving Italy the 10-6 win.

“The game was close but we were focussed,“ said Italy skip Stefania Constantini. “We kept working and we made a very good eighth end where we scored five. So we are very happy because it’s out first international win since we are a new young team — we are proud of ourselves.

“Today we were sharks because when they made mistakes we were right there, so I think this is our secret to winning. We were very happy after [the five] and our trainer told us ‘stay cool!’ because then our adrenaline goes up but we were very happy.”

Return of the ‘Garlic Girls’

Korea faced Scotland in this session and after forcing Scotland to a single point in the first end went on the offensive from the second end. Korea’s skip, EunJun Kim played a precise draw with her final stone of the second end to score two points and take a 2-1 lead.

Then in third end, Kim left Scottish skip, Eve Muirhead with a difficult angle raise while facing a Korean shot stone. Muirhead was unable to make the shot, giving Korea a steal of one point. Then in the fifth end, Kim played a hit and stay with her final stone to take a 6-2 lead into the break.

The teams traded single points for the next four ends, with Korea eventually coming out as 8-4 winners for their first victory of the week.

Afterwards, Korea skip, EunJun Kim, said: “In the second end we got two points and after that we felt comfortable with the ice and we had some confidence. We tried to keep our strategy simple and it’s why we won this game. We feel the first win is important to our team so we just continue to focus on this competition.”

United States and Canada traded single point scores for the first three ends, before United States forced a steal of two points in the fourth end to take control of the game. The teams once again traded single points for the next three ends, before United States’ skip Tabitha Peterson played a takeout of a Canadian shot stone to score two points and extend their lead to 7-3 after eight ends. Leading by two points going into the final end, Peterson played a hit to clear one of the two Canadian shot stones giving up a steal of one point but securing the 7-6 win.

RCF sit undefeated at the top of the rankings after defeating Estonia 8-6 for their fifth win of the championship. In a tight back and forth game, RCF took a 4-2 lead into the fifth end break. A score of two points in the seventh end and a steal of one point in the eighth end gave RCF the advantage. Then in the tenth end, with her final stone, RCF skip Alina Kovaleva drew to the button for a single score and the 8-6 win.