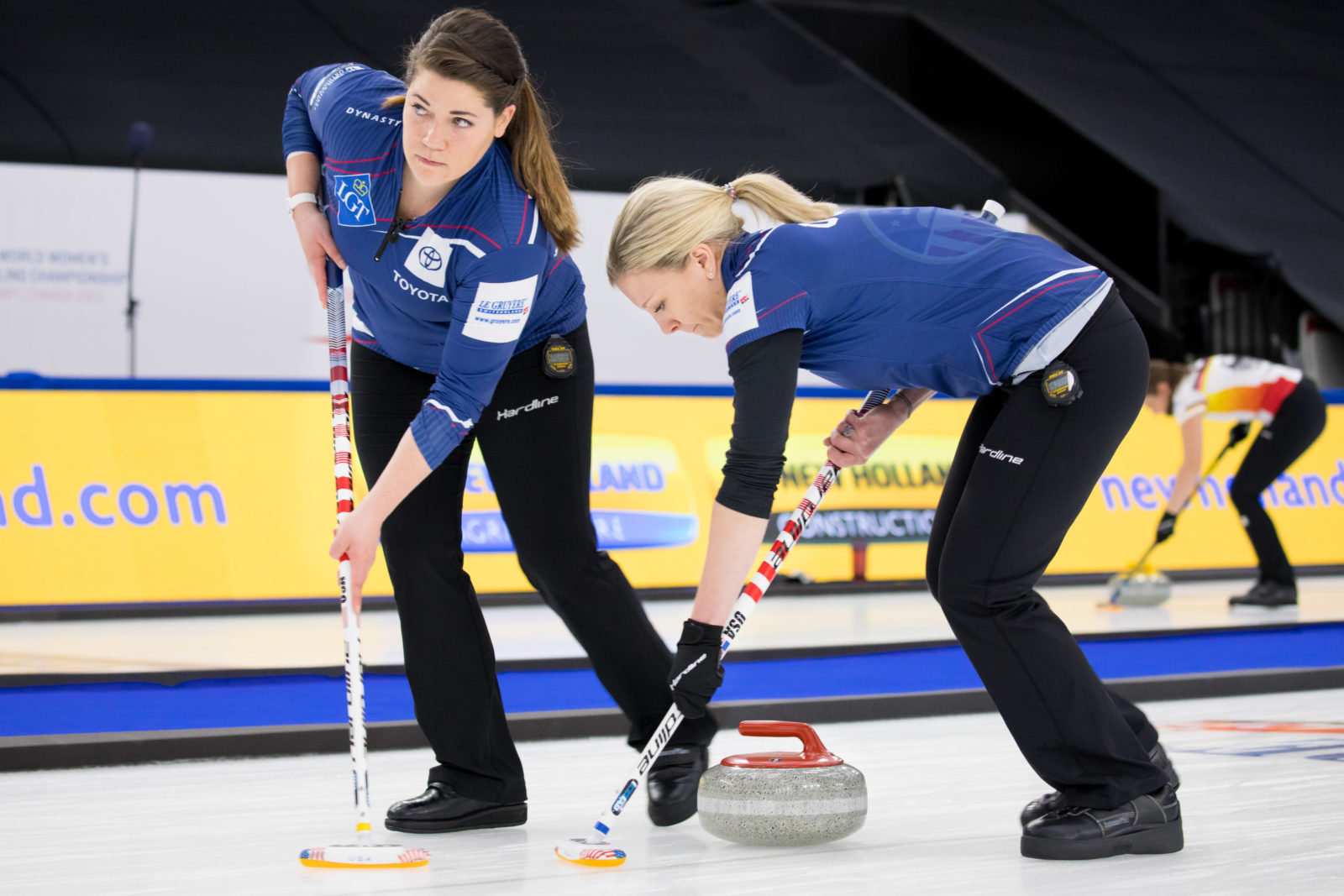 United States opened their winning account at the third attempt when they beat Korea by 11-5 in Saturday morning’s fourth round-robin session of the LGT World Women’s Curling Championship.  Meanwhile, Scotland moved into a clear lead, unbeaten at the top of the table with a third win – beating Germany by 7-6.

United States took the early lead in their game against Korea, stealing three points in the second end when Korea skip Eun Yung Kim was wide with a final hit attempt, after Korea blanked the first end.  Korea fought back after this, scoring one point in the third end and stealing two in the fourth end, when American skip Tabitha Peterson had an attempted tap-out that went wrong, to level the score at 3-3.

The United States then scored one in the fifth end with a nose-hit by Peterson to take a 4-3 lead into the break.

“You try not to be emotional, right?” says United States skip, Tabitha Peterson. “So yes, you can recognize it [the momentum switches] but then taking your brain back and thinking about what you’re doing in the present to make the next shot.

“Of course you can feel your heart beating and things like that but if you can focus on your breathing and the task at hand, good things can come from there.”

The Germans were still playing with just three team members in this session, because of COVID-19 protocols, when they faced joint leaders Scotland. The Scots looked to be in control after four ends when they held a 5-2 lead. But the Germans fought back and levelled the game at 5-5 after six ends.

The teams stayed close after this and were tied at 6-6 when Muirhead came to play the last stone of the tenth end. Her removal of a German stone was enough to give Scotland one point and a 7-6 win, that puts them into first place in the rankings, unbeaten with three wins.

Estonia, who are making their country’s debut at this level, faced Sweden in this session. When Estonia skip Marie Turmann tapped out a Swedish stone to score two points in the sixth end, they levelled the score at 3-3.

However, the Swedes took control after this. In the seventh, their skip Anna Hasselborg drew for two points and a 5-3 lead, while, in the eighth, Turmann could only score one point to reduce Sweden’s lead to 5-4. Sweden went on to run Estonia out of stones in the tenth end, to win by 7-4.

The game between China and Denmark swung both ways. In the third end, China scored four on a draw to the four-foot to take a 4-2 lead. Denmark responded straightaway with a four of their own after a precise double take-out in the fourth end to re-take the lead, this time at 6-4.

They followed that up with a steal of three in the fifth end when China skip Yu Han was heavy with her final draw to take an 9-4 lead. The Danes then finished off the game with a score of five in the seventh end for their first win so far, at 14-5.

“It was a very notable difference from last night where we just had trouble getting settled almost,” says Danish skip, Madeleine Dupont. “We were really good at resetting and bouncing back and not letting bad ends like giving up a four affect us and we just kept going.”

“We’re really happy to be playing, this is the first world championship for two of the girls, so I think that’s a really big experience. We don’t have any big goals like reaching sixth place or medal or anything, we just really want to do a good job out there and prove to ourselves that we belong here.”