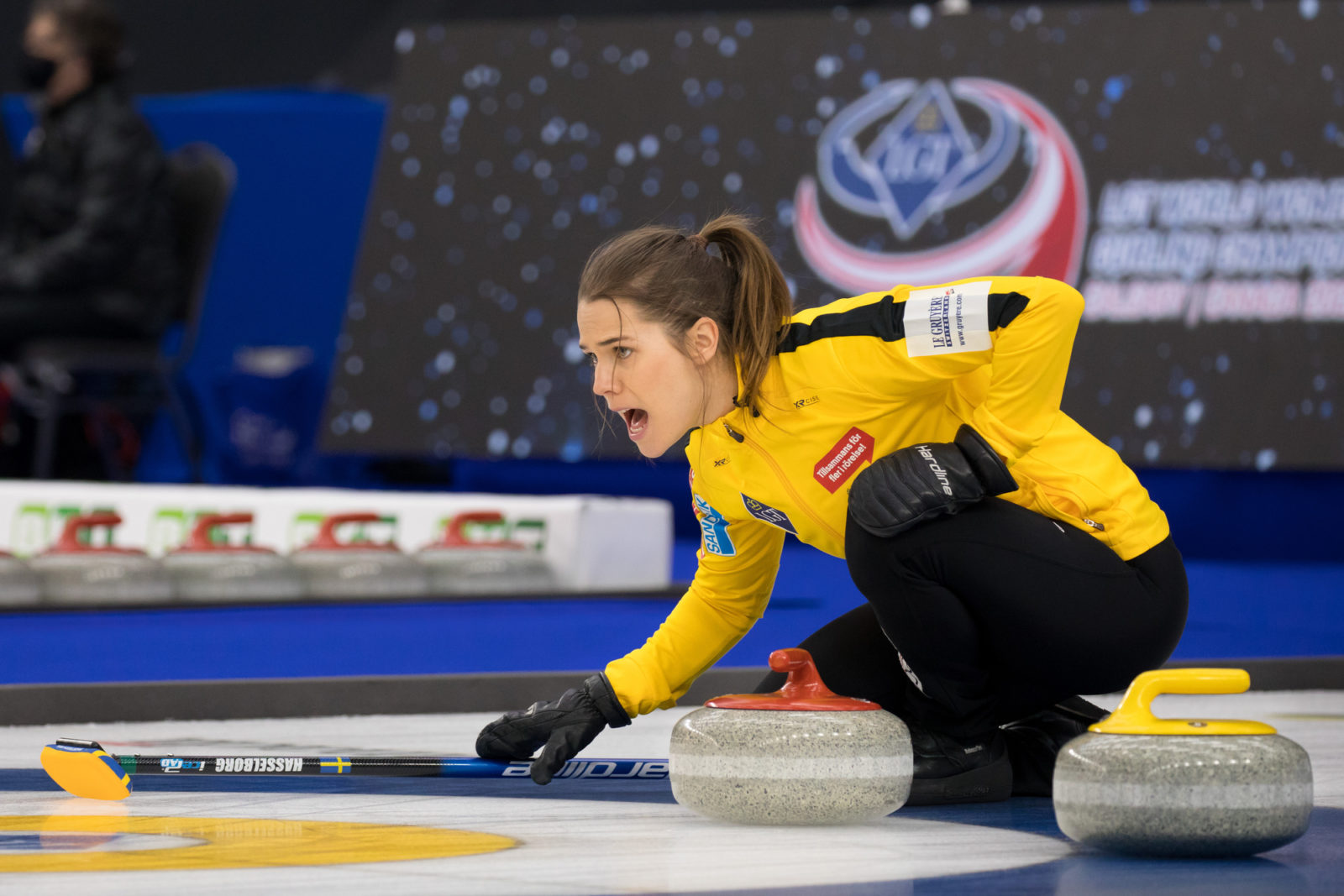 Sweden and United States earned their places in the LGT World Women’s Curling Championship 2021 semi-finals on Saturday (8 May) morning at the WinSport Arena at Canada Olympic Park in Calgary.

Sweden faced hosts Canada in the Qualification 3v6 game and in the first end, Sweden’s Anna Hasselborg attempted to play the hit-and-stay for two points with her final stone. However, she was heavy and slightly wide with her hit attempt and rolled out with her shooter to only score the single point.

In the second end, with Sweden sitting two shot stones in the house, Canada’s Kerri Einarson was forced to draw for a forced single of their own.

The third end saw a measure confirm a two-point score for Sweden after Hasselborg’s hit for two moved one of their stones to the edge of the eight-foot ring.

In the fourth end, Canada were forced to draw for a single point again after Hasselborg’s hit-and-roll with her final stone, buried the shot stone behind multiple guards.

The fifth end saw Sweden extend their lead after they scored two points when Hasselborg’s hit-and-stay in the eight-foot ring gave them two points and a 5-2 lead.

Canada responded in the sixth end with another single point after Hasselborg’s run-back left Sweden sitting three shot stones, forced Einarson into an open hit on the shot stone in the four-foot ring.

Sweden added another two points in the seventh end after a draw to the the four-foot ring for the 7-3 lead.

Then in the eighth end, Anna Hasselborg played a perfect runback double take-out to sit three shot stones with her final stone, leaving Canada’s Kerri Einarson with a difficult attempt to score the single point. Einarson hit the Swedish stone on the edge of the four-foot ring and gave up a steal of one point. After which Canada conceded with the score 8-3 to Sweden.

Hasselborg said afterwards, “The girls played really, really well today. They judged weight perfectly and communicated well. It was really a solid game and we had lots of fun. It was really amazing.”

In the 4v5 Qualification Game, Denmark opened the scoring in the first end when Danish skip, Madeleine Dupont attempted a difficult draw for two points, but caught a United States’ guard on the edge of the eight-foot ring and was only able to score the single point.

Denmark increased their lead in the second end after United States’ skip, Tabitha Peterson, was light with her draw attempt when facing a single Danish shot stone buried at the edge of the four-foot ring.

United States got on the scoreboard in the third end, when Peterson was forced to play an open hit-and-stay on a Danish stone in the eight-foot ring for the single point.

With the last stone advantage in the fourth end, Denmark played a tap on a United States shot stone sitting on the button for a single point, and a 3-1 lead.

After blanking the fifth end, United States changed the dynamic of the game with a score of three points in the sixth end when Peterson drew her final stone to the edge of the four-foot ring.

Denmark bounced back immediately in the seventh end, when Dupont had an open draw onto the button, then after a measure confirmed that the only other stone in play was biting the edge of the 12-foot ring and in scoring position, giving them two points.

However, United States retook the lead in the eighth end with another three-point score. Dupont was heavy with the draw for her last stone, leaving Peterson to draw to the eight-foot ring. A measure was required once more to confirm the score of three points and the 7-6 lead.

Denmark levelled the score in the ninth end, when Dupont played a precise draw through a narrow port to the four-foot for two points.

Then, with the scores level in the tenth end, Peterson used her last stone advantage to draw to the button for the single point, the 8-7 win and a place in the semi-finals.

United States skip Tabitha Peterson, when asked about their preparation for the semi-final said: “We’re going to try to keep it as close as we can in the game against [Switzerland], they’re a pretty good team, so we definitely need to keep the pressure on them to keep it close. That way we can maybe have a shot for the win.”

In the semi-finals, United States will face top-ranked Switzerland at 15:00, while Sweden will take on second-ranked RCF at 19:30. All times are Mountain Daylight Time (MDT) which is Coordinated Universal Time (UTC) -6 hours.