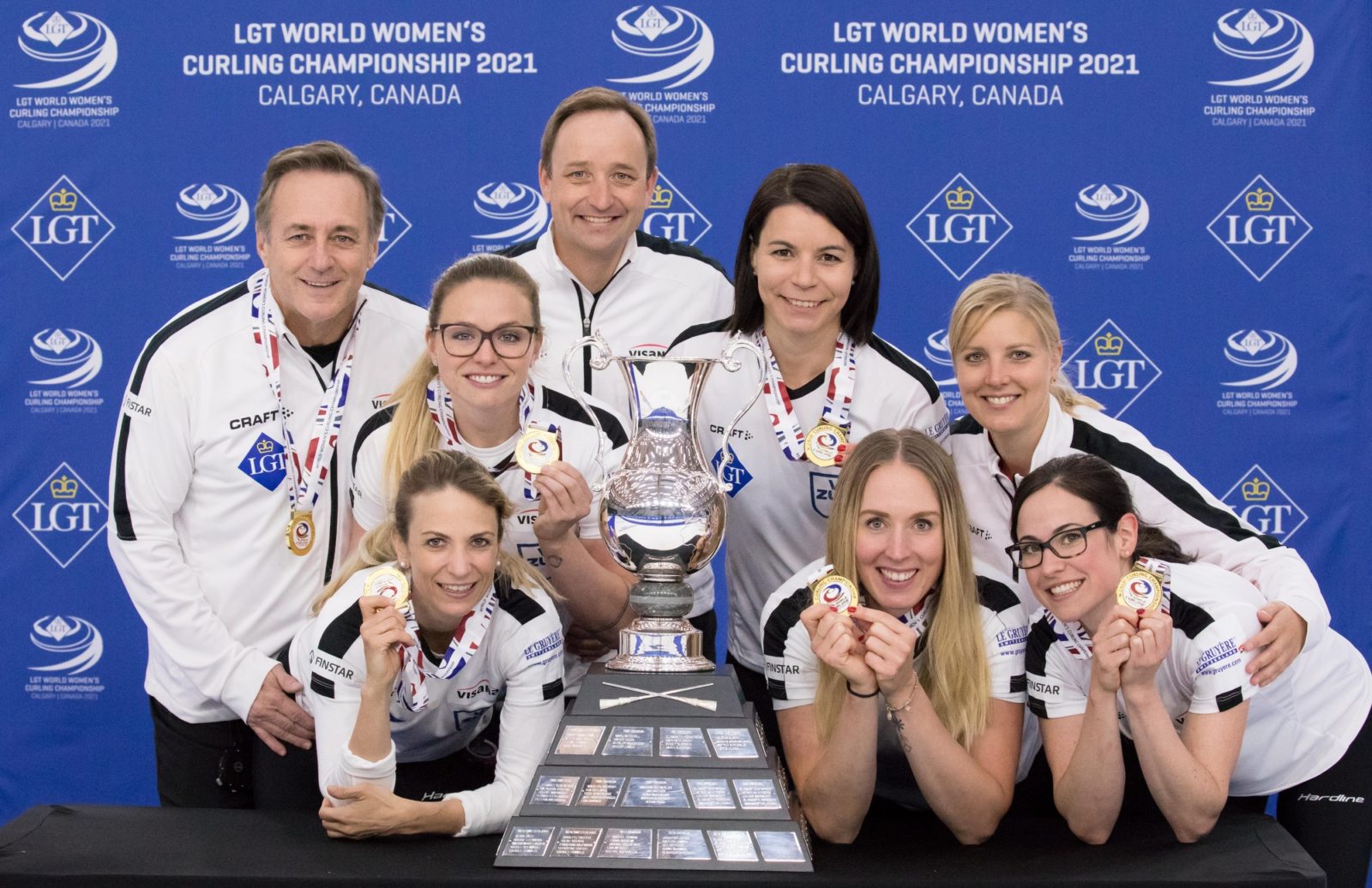 Switzerland retained their world title after defeating RCF in the LGT World Women’s Curling Championship 2021 gold medal game on Sunday (9 May) afternoon in the WinSport Arena at Canada Olympic Park in Calgary.

In the first end, RCF, skipped by Alina Kovaleva — with third Julia Portunova, second Galina Arsenkina, lead Ekaterina Kuzmina and supported by alternate Maria Komarova and coach Sergei Belanov —were sitting two counters. After a hit-and-roll by Kovaleva, Switzerland’s fourth player, Alina Paetz was forced to play a hit-and-stay for the single point to open the scoring.

RCF blanked the second end of the game, then in the third end, Kovaleva had a draw for two points, but came up short of the four-foot ring and instead scored a single point to level the game.

In the fourth end, Paetz played a double take-out with her final stone to score two points and take a 3-1 lead.

Unable to engineer a multi-point score in the fifth, sixth or seventh ends, RCF chose to blank all three to retain control of the last stone advantage.

In the eighth end, facing one Swiss counter in a house full of Swiss stones, Kovaleva was forced to play a tap to promote the sole RCF stone into shot position for one point.

Switzerland blanked the ninth end, with the score 3-2 in their favour to retain the last stone advantage going into the tenth end.

In that tenth end, after Kovaleva was light with a freeze attempt with her last stone leaving Switzerland in shot position, Paetz wasn’t required to throw her final stone. Switzerland scored the single point for the 4-2 win and the world title once again.

A delighted Switzerland skip, Silvana Tirinzoni, said after winning gold: “It can’t get any better really. Just to have an amazing week and to finish it like this, it doesn’t get any better.

“It was very important [having hammer in the tenth end], especially if you have Alina throwing last rocks. She’s not going to miss too many of those, so having hammer coming home is a good feeling. I was quite confident. You can’t describe it how it feels [to be back-to-back champions], especially after being here for such a long time. We can’t wait to go home and bring that cup back home to Switzerland.”

Alina Kovaleva, RCF silver medal winning skip said: “We just made more mistakes today than yesterday, that was the key to our loss. Yeah we’re happy [to win the silver medals], we worked a lot for this result, but next year we’re going for gold.”

Ahead of the gold medal final it was announced that Switzerland’s Alina Paetz was the winner of the Frances Brodie Award, voted for by all the athletes to recognise the player they think best exemplified curling’s values and sportsmanship throughout the event.