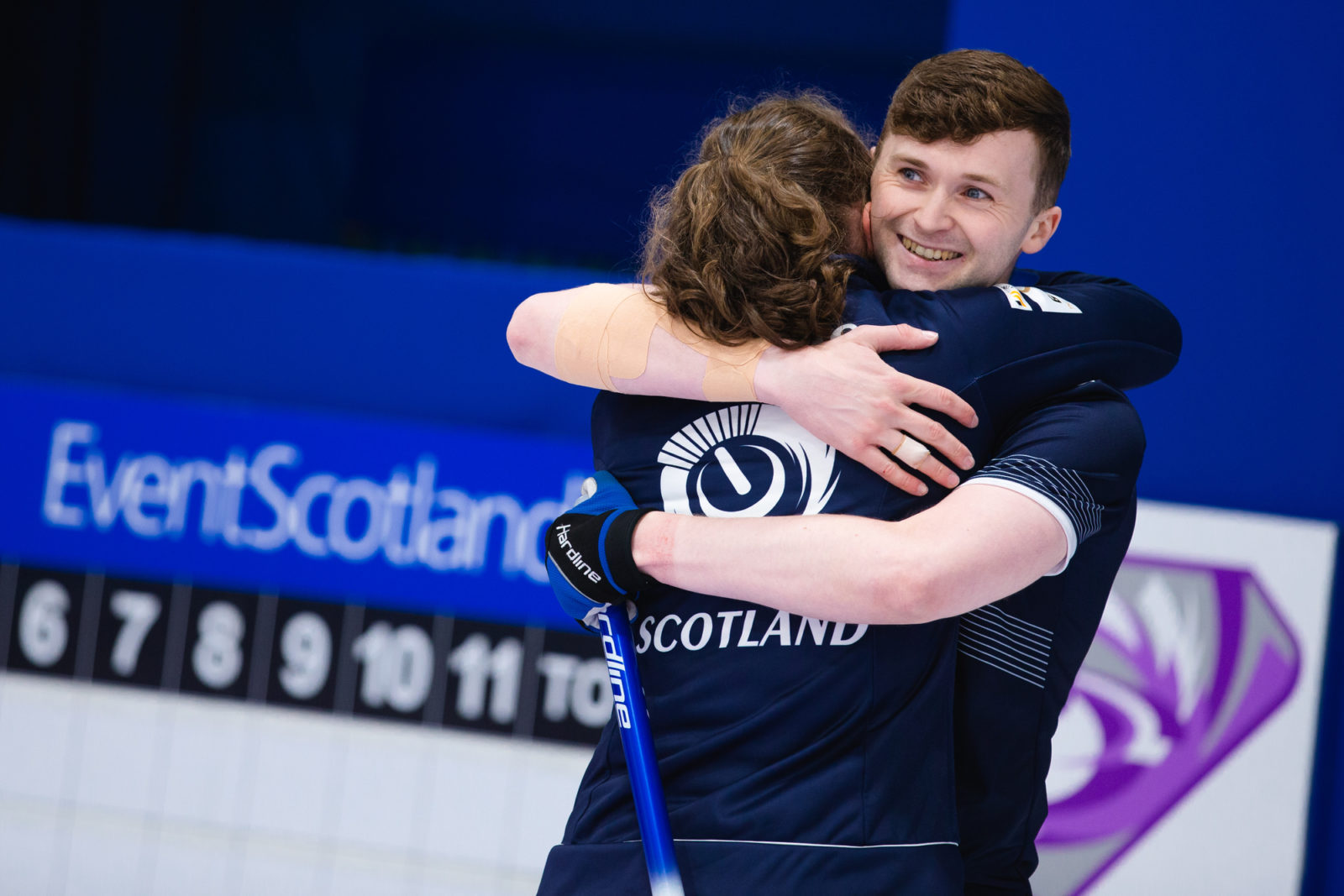 Scotland faced Canada in Saturday (22 May) evening’s second semi-final of the World Mixed Doubles Championship 2021 being held in Curl Aberdeen, Scotland with support from EventScotland and UK Sport, knowing that the winners would play the first semi-final winners, Norway, for gold medals and the title.

The Scots started with last stone advantage in the first end and Jennifer Dodds took out the Canadian counter in the house to open the scoring with one point.

In the second end, Canada’s Kerri Einarson was facing three Scottish stones in the house and played a nose-hit to level the score with a single point.

Scotland then made the first break-through in the third end when they took advantage of Canadian mistakes and Dodds had a draw for three points and a 4-1 lead.

In the fourth end, there were six stones inside the four-foot ring when Dodds played her last stone – a nudge-up that put a Scottish stone into second shot position. Einarson’s attempted take-out with the last stone of the end was heavy and wide, so Canada had to settle for the single point from this end. After which the teams went into the break with Scotland holding a 4-2 lead.

In the fifth end, the Scots had a chance to score two points, but Dodds was light with her final draw to the button, and they had to settle for just one point, for a 5-2 lead.

In the sixth end, with Canada calling their power-play, the Scots missed a double take-out attempt, which left Einarson with an open draw to score two points and reduce Scotland’s lead to 5-4.

Then, in the seventh end, it was Scotland’s turn to use a power-play. There were two Canadian counters in the house when Dodds came to play her last. Dodds drew her final stone for one point to give the Scots a two-point lead, at 6-4.

By the end of the eighth end, the Canadians were desperately looking for a way to score two points to tie the game. This forced Einarson to play a big weight take-out, but one of the Scottish stones spun into position to steal one point and win the game by 7-4.

After their win Scotland’s Bruce Mouat Said: “You love to get a head-start in this type of game when the pressure is on both teams. We managed to get a three early and something like that is going to be huge by the end of the game — it was a big advantage for us at the end of the game.”

He added: “This season’s been bizarre, so just being able to curl and compete is a blessing.  I’m just buzzing to be in a world final. This is my fifth mixed doubles championship, and this is clearly my best performance. I’ve been trying so hard to get to a gold medal match in mixed doubles and this is by far the best that I’ve been playing. And to have Jenn alongside me is just an absolute pleasure.”

Meanwhile, Jennifer Dodds said: “We’ve played with confidence and we’re having so much fun. That’s the most important thing, because we know we play at our best when we’re enjoying it. Now, we’re going to enjoy every minute tomorrow because you don’t get to play in a world final every day.”

The championship concludes with two more games on Sunday (23 May) – the bronze medal match between Sweden and Canada takes place at 10:00, followed by the gold medal game between Norway and Scotland at 15:00.

Neither nation has won the World Mixed Doubles title to date, ensuring a new name will be etched into the discipline’s history tomorrow.