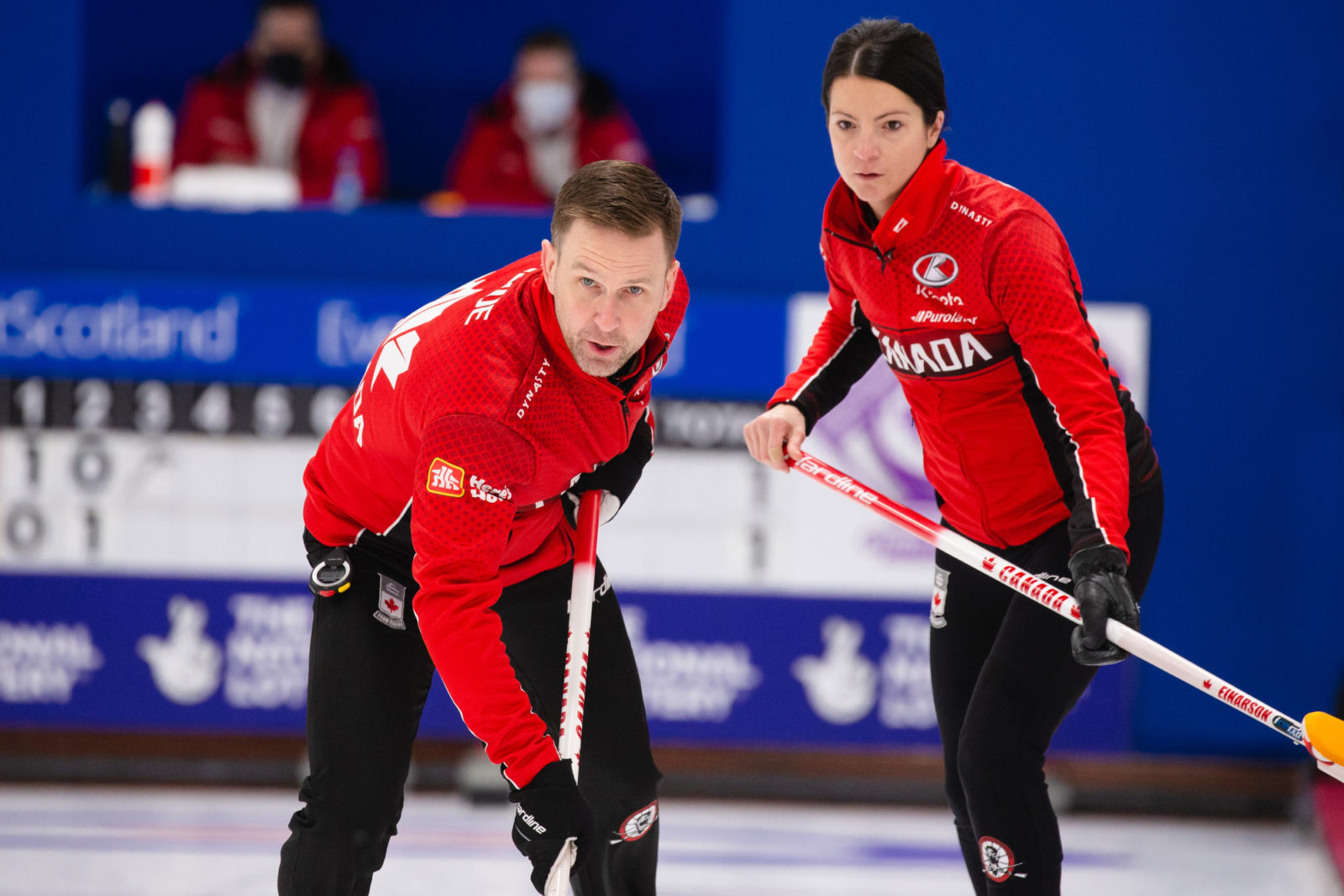 Places in the semi-finals were up for grabs in Saturday (22 May) morning’s qualification games, with Switzerland playing Canada and Norway up against Italy, as table-toppers Scotland and Sweden awaited the winners.

In the game between Switzerland and Canada, it was Canada who opened the scoring with one point after Canada’s Kerri Einarson’s tick attempt for two points was wide.

Switzerland responded, levelling the game at 1-1 in the second end when Jenny Perret played a draw to the four-foot ring.

The Swiss then moved ahead with a steal of three points in the third end, when Einarson came up short with her final draw.

The Swiss then moved further ahead with a single-point steal in the fourth end, after Einarson’s last stone wrecked on the way into the house, giving Switzerland a 5-1 lead at the halfway break.

In the fifth end, with Canada using their Power Play, Einarson scored three points with a successful draw, then Canada stole one point in the sixth end to level the game at 5-5.

In the seventh end, Switzerland’s Perret drew her final stone inside three Canadian counters to score one point and take a 6-5 lead into the eighth end.

In that end, Canada’s Brad Gushue caught a guard with his final stone as he attempted to get among three Swiss stones lying around the button. But, Einarson succeeded in her weighted attempt, moving the four Swiss shot stones and leaving a Canadian stone in position to score one point, tie the game at 6-6, and force an extra end.

In the extra end, Switzerland’s Jenny Perret had a final-stone draw for the win, but, despite the Swiss team’s best sweeping efforts, she came up just short, giving Canada a steal of one point for the 7-6 victory that puts them into a semi-final against Scotland.

Canada’s Einarson identified a lengthy team discussion after the fifth end as a turning point, saying: “We just said ‘stay in it, keep fighting and make some shots and push pressure on them’.”

Speaking about Einarson’s shot in the eighth end that forced the extra end, Gushue said: “It was one of the best shots I’ve ever seen! You had to throw it really hard to make it and she hit it absolutely perfect.”

Norwegians move to the semi-finals

Against Italy, Norway opened the scoring with a single point in the first end, then in the second end, Italy’s Stefania Constantini was heavy with her final draw, to give Norway a steal of one point and a 2-0 lead.

In the third end, Italy had a stone in scoring position when Constantini played her last shot. She could not find a way in with her final stone to add to that score, leaving Italy to settle for just that one point as they reduced Norway’s lead to 2-1.

Norway scored a single point in the fourth end, then, after an umpire’s measure, had a steal of two points in the fifth to extend their lead to 5-1.

In the sixth end, Constantini played a well-judged take-out to score three points and reduce Norway’s lead to 5-4.

In the seventh, a draw by Norway’s Kristin Skaslien scored two points as the Norwegians extended their lead to 7-4.

In the eighth end, Skaslien removed two Italian stones but left another to score one point.  This was not enough for Italy, and Norway won by 7-5. They now face Sweden in the semi-finals.

After the game, Norway’s Magnus Nedregotten said: “That was a very good game, it was the best game we’ve played this week.  We’re in the play-offs, so now it’s time to just focus on what we can do something about.”

Speaking more generally, his partner Kristin Skaslien said, “It’s been amazing to be back and playing in a Championship again.  Everything has gone smoothly and there’s been an extremely good effort from the organisers here.”

In the two relegation games that took place this morning, Hungary beat Finland, by 10-4, to qualify for next season’s championship, while Japan beat Korea, by 7-5, to stay up.