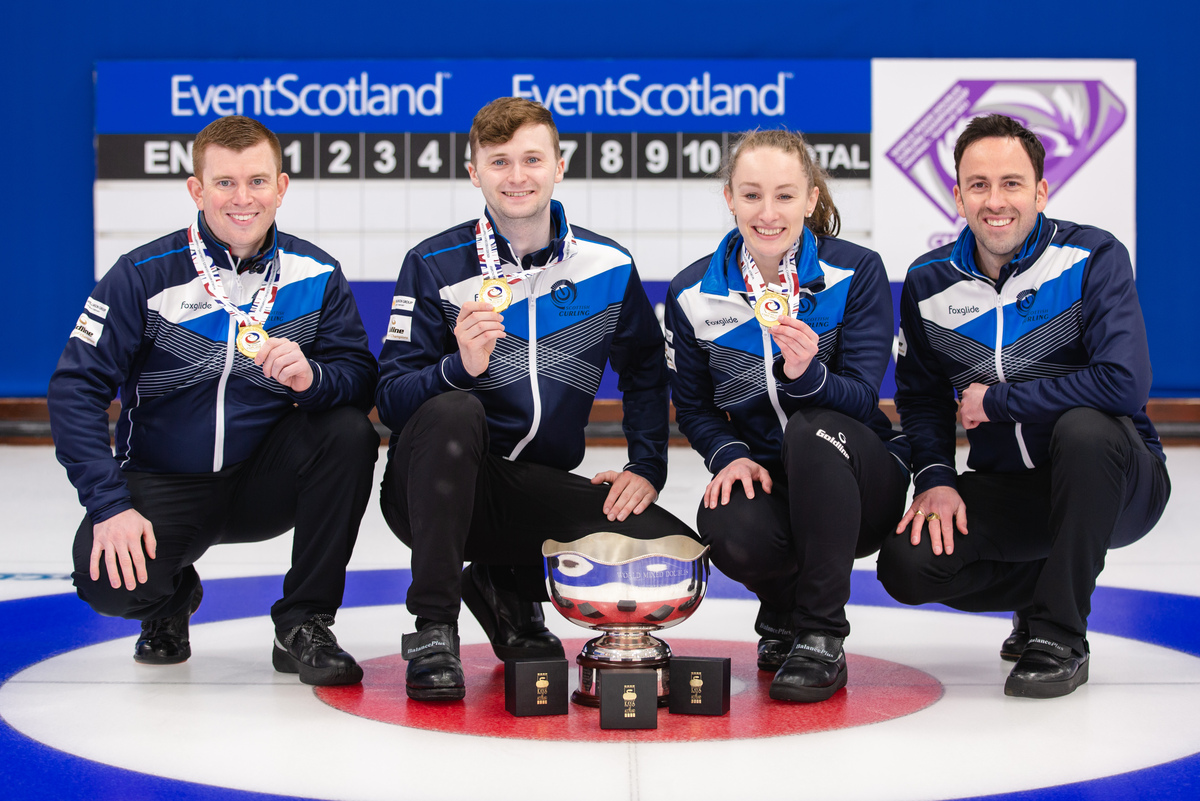 The World Mixed Doubles Curling Championship 2021, staged in Curl Aberdeen, Scotland, and supported by EventScotland and UK Sport, came to a climax on Sunday (23 May) afternoon when the Host nation, represented by Jennifer Dodds and Bruce Mouat, faced Olympic bronze medallists Norway – Kristin Skaslien and Magnus Nedregotten – in the gold medal final.

Scotland had last stone advantage in the first end, and with Dodds’ last draw-shot, they tapped out a Norway stone to open the scoring with two points.

In the second end, Norway had two counting stones in the house when Kristin Skaslien came to play her last shot. She was successful with a nose-hit to score three points and take a 3-2 lead.

In the early part of the third end, Norway built up their stones only for Scotland’s Mouat to clear them out. After this, Dodds drew her last stone onto the button to score one point and level the score at 3-3.

In the fourth end, Scotland’s Dodds caught a Norway stone on the way in and this gave Skaslien a chance for a double take-out that would have given her team a score of four. Her attempt failed but her stone did roll into position to score two points, giving Norway a 5-3 lead at the halfway break.

The fifth end featured delicate taps by both teams and Scotland lay two points when Skaslien played a guard with her final stone. This left Scotland’s Dodds with a very difficult wide draw attempt for three points which came up just short, and the Scots had to settle for two points to tie the game at 5-5.

Norway used their power-play in the sixth end and spent the early part of the end bringing stone after stone into the house, only for Scotland’s Mouat to clear them all with a triple take-out.

Norway did manage to score two points from the end, when Skaslien played a gentle hit and stay with her last stone. This gave Norway a 7-5 lead.

It was Scotland’s turn to call a power-play in the seventh end and they used it to build up stones in the house.

Norway’s Nedregotten just missed on a double take-out attempt, then Dodds was able to hit and stay for three points, giving Scotland the lead, at 8-7, for the first time since the first end.

In the eighth end, Scotland had fifteen seconds left on the clock when Dodds played a final guard.

Skaslien then played a runback on the front guards and moved all the stones around the four-foot ring. It wasn’t immediately clear if Norway had succeeded in scoring one point to tie the game and force an extra end, or if Scotland had managed a single-point steal.

After what seemed like a long tense wait, the umpire’s measure confirmed that the Scots had stolen the single point to become world champions with a final score of 9-7.

Afterwards, Scotland’s Jennifer Dodds was still shell-shocked: “We can’t quite believe it right now, we’re still a wee bit in shock, but getting a three with our power-play was massive.”

Bruce Mouat added: “That was such a tough game, we were a wee bit scrappy for a while.  We both really felt that we could win it and that’s exactly what happened. I had a look at the end of the eighth end and was pretty sure it was our point by a couple of centimetres, but he was right to call for a measure.”

A disappointed Magnus Nedregotten said, “It’s been a fantastic journey from the very first stone. It’s hard to take [silver] but this shows that we have the potential to reach our goal in Beijing.”