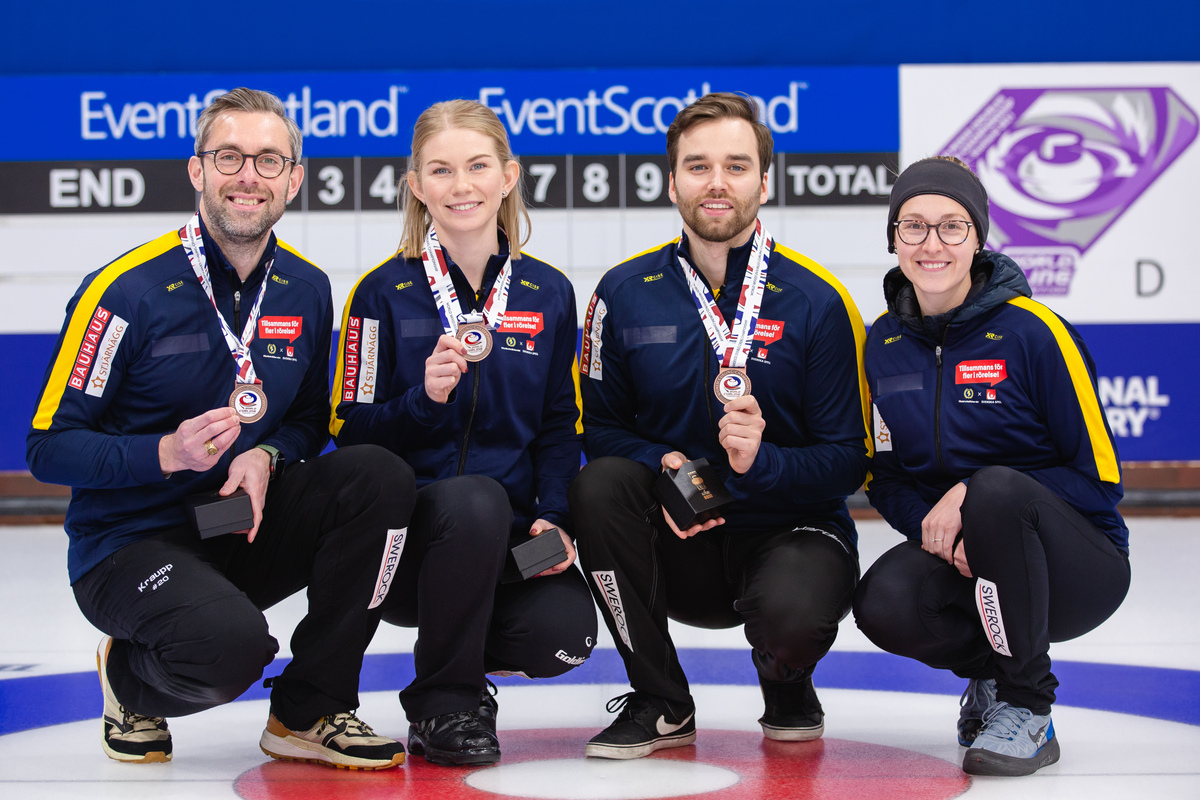 Sweden’s De Val and Eriksson, supported by coach Sebastian Kraupp, faced Canada – Kerri Einarson and Brad Gushue, with support from coach Scott Pfeifer — in this game and it was the Swedes who took the early advantage. In the first end, De Val was able to draw her last stone into position to open the scoring with four points.

Sweden had a stone on the button from early in the second end, but with her last stone, Canada’s Einarson managed to tap it out of position and after an umpire’s measure, this shot gave Canada one point to reduce Sweden’s lead to 4-1.

Canada had two good draws in the third end to lie in shot position when Sweden came to play their last stone. After a discussion, the Swedes decided to sacrifice one point from the end and threw their last stone through the house, avoiding the risk of causing more damage. This reduced Sweden’s lead once again, to 4-2.

In the fourth end, Sweden had an open draw for two points to re-establish a four-point lead, at 6-2.

After the break, Canada called their power-play in the fifth end, but, when they came to play their last stone, Sweden were lying two counters, with a front guard, leaving Einarson no option but to draw for just one point rather than the bigger score Canada were looking for.

Sweden called their power-play in the sixth end and gradually built up their stones in the house, looking for a big score. However, Einarson delivered a perfect freeze with Canada’s last stone of the end and this forced Sweden to simply draw their last stone onto the button, for just one point.

Canada built up the seventh end and looked like achieving a big score, but, with her last stone De Val played a triple take-out to rescue the situation. Einarson’s last take-out was slightly mis-judged, and they could only score one point from the end.

This meant that Sweden led by 7-4 as the teams played the eighth end, and eventually, Canada conceded without finishing the end.

“After a tough loss yesterday, it was really good to go out there today, have fun, and play as well as we know we can,” said Sweden’s Almida De Val. “This week has been so much fun and I’m really proud of how we’ve been playing.”

Oskar Eriksson then added: “We played a lot of really good games. Unfortunately, we lost to Norway yesterday, but they have been one of the best teams here all week. We’re just happy winning ten out of eleven games.”

World Curling TV will be broadcasting the gold medal game at 15:00 British Summer Time (BST) which is Universal Coordinated Time (UTC) +1 hour. Details on the TV coverage can be found here.