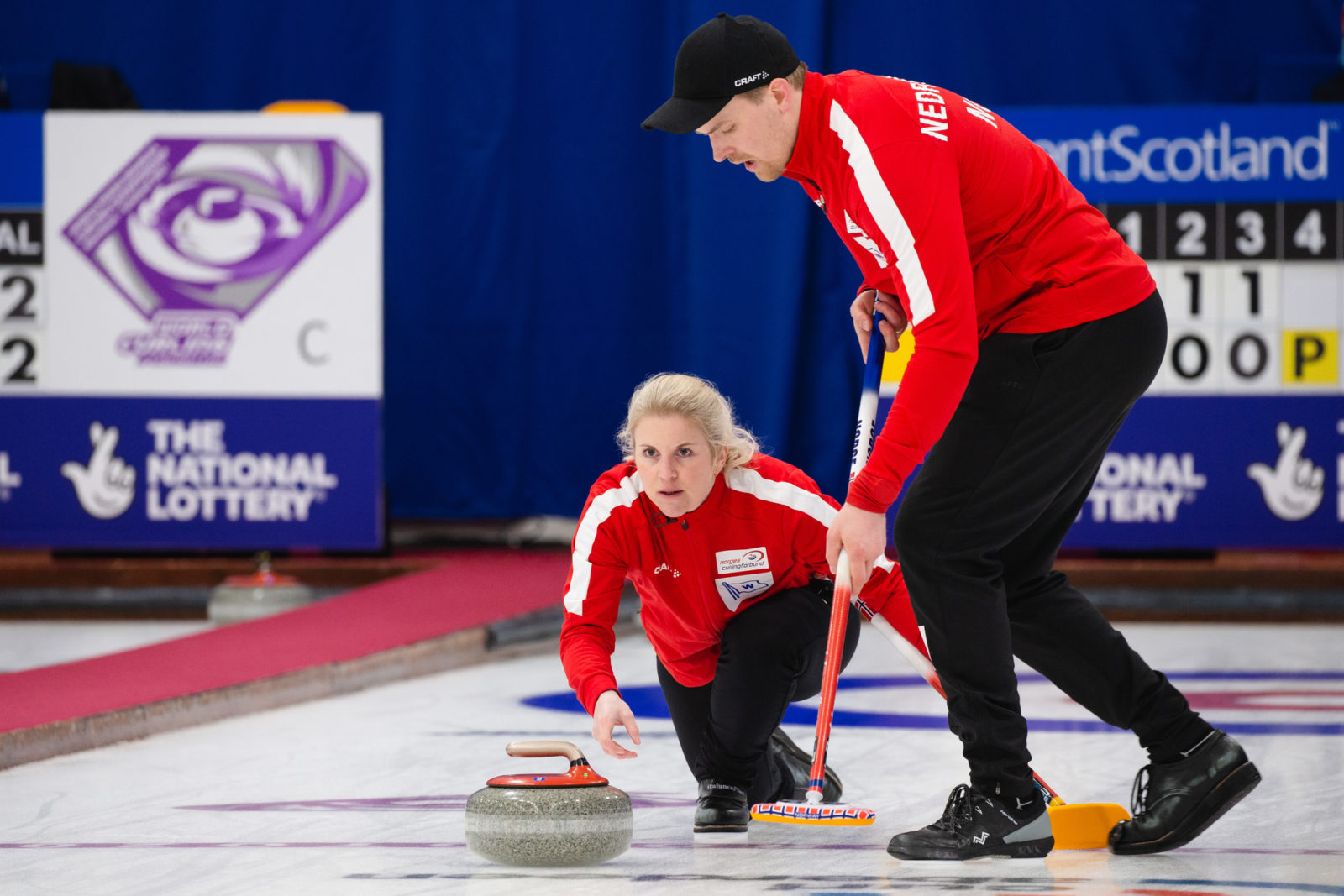 Norway had a last-stone, 8-7, win over United States while Switzerland beat Estonia, by 8-5, in their second-last Group B round-robin games and join already-qualified Sweden in the line-up for the weekend play-offs and medal games.

They also have the added bonus of qualifying their national Olympic committees for next year’s Beijing 2022 Olympic Winter Games mixed doubles event.

Norway had to overcome giving up a score of five points in the third end to achieve their win.

They started their recovery in the fourth end when Kristin Skaslien played a well-judged draw-shot to score three points and reduce the Americans’ lead to 6-4.

Eventually, in the eighth end, Skaslien drew her last stone onto the button to score one point and win the game by 8-7.

Afterwards, she said: “It’s amazing… we’ve been working so hard for this, practising, not playing any tournaments. You don’t know how you’re going to do when you first come to a competition after being away for so long, so we’re really happy and really relieved. I’m drained now. We had a bad couple of first ends but then we managed to stay in there. We really fought hard and it paid off.”

Switzerland trailed Estonia, 2-4, going into the fourth end break, but a score of two points in the fifth end tied the game.

Then, in the seventh end Switzerland managed to move clear in this game, when Jenny Perret tapped-out an Estonia stone and kept her own in the house, to score four points.

Estonia ran out of stones in the eighth end as Switzerland recorded their fifth win to qualify.

Speaking afterwards, Martin Rios said: “I think that’s us just qualified for the play-offs. But that’s been the story of the week – struggling from game to game but still managing to qualify.

“That was a hard fight against Estonia, they gave us a hard time out there.  We knew at the beginning of the week, there’s no weak teams here.  We knew it was going to be a hard week but now we’re pretty much relieved.”

Defending champions Sweden had already qualified when they came onto the ice to play New Zealand and, after opening the scoring with one point in the first end, they had steals in the next four ends to lead by 8-0 when they came to play the sixth end.

New Zealand managed a consolation single point in that end before conceding, with Sweden eventually winning by 8-1.

Elsewhere China beat Finland when their female player Ying Yang cleared out a Finnish stone in the eighth end, giving the Finns a score of one point from the end. This single point wasn’t enough as China emerged as 10-8 winners.

In the session’s final game, Japan led England by 6-5 in the eighth end when England’s Anna Fowler played a hit and stay with the last stone of the game, to score two points and complete a 7-6 win.