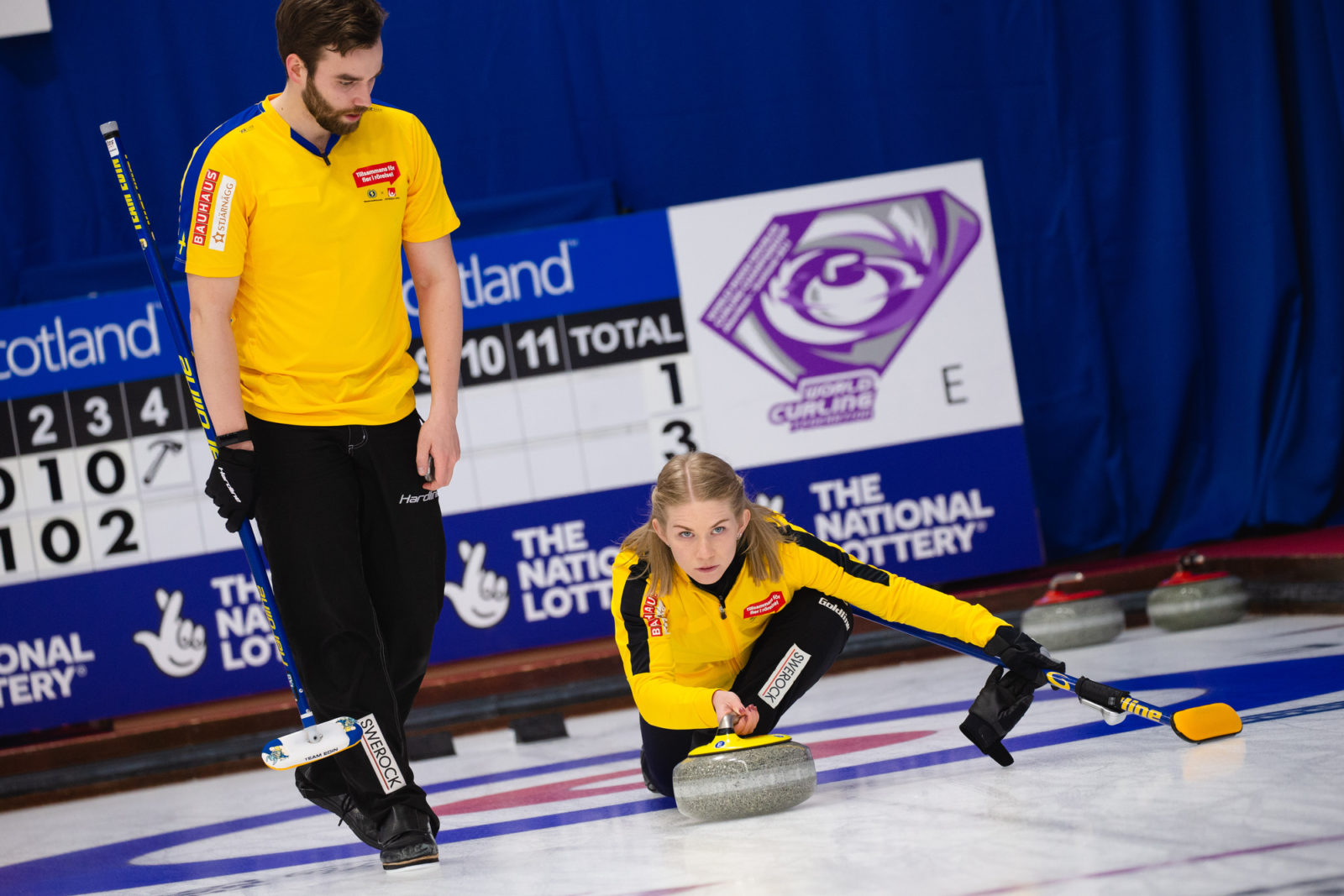 A 9-2 win over England in Wednesday evening’s fifth Group B round-robin session ensures that Sweden continue as the only unbeaten team in the Championship, but behind them the contest for the other two play-off places in the Group is tightening.

The Swedes took an early one-point lead in this game, but in the second end England’s Anna Fowler played a raise take-out to score one point and level the score at 1-1.

Sweden scored a key four points in the sixth end to build a 7-2 lead and put the game beyond England. Then in the seventh end, Fowler came up short with her final to give Sweden a steal of two more points. After which England conceded with the score at 9-2.

Sweden’s Almida De Val spoke after the game, saying: “We have been playing very well, so it feels great on the ice, and now we want to keep playing well. But we’ll just take one game at a time and focus on that game, not thinking about the other games that are coming.”

Switzerland and United States in four-way tie for third

Switzerland played United States in this session and went into the fourth end break tied at 2-2.

Then in the fifth end, after an umpire’s measure after Switzerland’s Jenny Perret played a draw with her last stone, the Swiss were awarded a score of four points and took a 6-2 lead.

In the seventh end, Perret played a nose-hit on a United States stone for two more points to win the game by 8-3.

Afterwards, Switzerland’s Martin Rios said, “We were a little lucky when we scored four, but I think we played a pretty good first half. We were lucky this time, but we’ll take it.”

Norway move into clear second place in Group B

Norway faced Estonia in this session and in six ends, led by 7-0 after opening the scoring with three points, then stealing four single points in a row.

Estonia drew for a single consolation point in the seventh end, then conceded defeat, with a final score of 7-1.

“We played that one very well,” said Norway’s Kristin Skaslien. “I think that was our best game so far, by far. We’re getting better and better now and hopefully we’ll continue that in the championship.”

Japan played China in this session and in the fourth end, with the score tied at 3-3, Yuta Matsumura tapped-out a China stone to score three points for a 6-3 lead.

In the seventh end, China scored three points to bring themselves back into contention, trailing 6-8. However, Japan ran them out of stones in the eighth end for their third win.

New Zealand opened the scoring in their game against Finland with a single point in the first end.

Then in the second end, Finland’s Oona Kauste facing three New Zealand counters, could only remove one stone leaving two others in position, to give New Zealand a steal of two points and a 3-0 lead.

In the eighth end, New Zealand’s Courtney Smith knocked out a Finnish stone to end the game, and secure the 6-4 win that keeps them in the play-off hunt.

Smith is making her debut at this event and she said: “My mind is so scrambled with strategy and other things — I’m learning so much, it’s amazing.”

However, she refused to think or dwell on her team’s play-off possibilities, adding: “Let’s just focus on our next game. We don’t want to time-travel and get too far ahead of ourselves – that’s not helpful. Now, we’re just going back to the hotel, look after ourselves, and get ready for tomorrow’s game.”