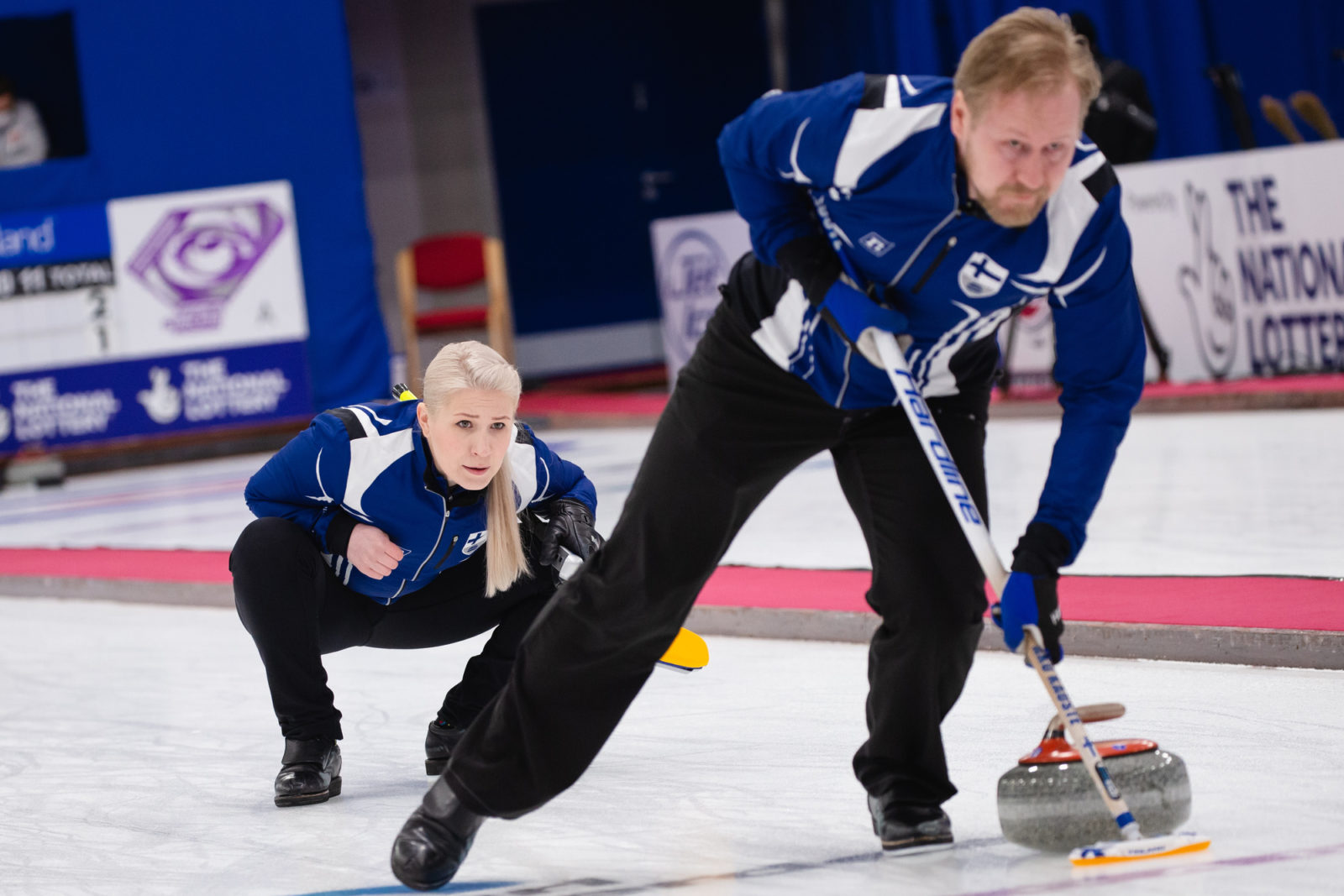 Finland recorded their first win of the event so far when they beat England, by 7-3, in Wednesday afternoon’s fourth session of Group B round-robin play at Curl Aberdeen in Scotland.

The Finns — represented by brother and sister duo, Aku and Oona Kauste — started well, scoring two points in the opening end, then stealing a single point in the fourth end to go into the break with a 4-2 lead.

Eventually, in the eighth end they ran England out of stones to take the win that had eluded them until now.

After the game, Oona Kauste said: “We’ve had three poor games but now, we’ve finally found our stones, so it’s much easier.”

Her brother Aku Kauste added “We were happy with our performance in this game.  We played really well today from the start, and that helps.”

The Swedes were down, by 2-3, in the fourth end when Almida De Val played a raise double take-out to score three points and take a 5-3 lead.

The Americans could not get back on level terms after that and the Swedes went on to win, by 7-5, to maintain their unbeaten record at the top of the table and become the only unbeaten team left in the competition.

Norway move into joint second in the group

Norway, who beat China, by 8-6, in this session, led throughout this game.

In the eighth end, with Norway sitting shot stone, China’s last delivery was wide and heavy, giving Norway a score of one point, without having to throw their last stone, for their third win.

Norway’s Magnus Nedregotten acknowledged the importance of this victory to his team’s qualification hopes, saying: “We’re still there. We’ve been struggling a bit in the last two games, including this one. We had a good start to this game but we’re struggling when we’re not on the track that we usually play on.”

Japan beat Switzerland by 9-6 in this session.

Switzerland were ahead, by 2-1, in the third end when Japan’s Yuta Matsumura played a double take-out to score three points and take a 4-2 lead.

The Swiss responded with three points of their own in the fourth end when Jenny Perret played a delicate tap shot and kept her own in play – allowing Switzerland to re-take the lead at 5-4.

In the fifth end, Japan’s Matsumura took out two Swiss stones to score another three points for a 7-5 lead.

Finally, in the eighth end, Japan knocked out another Swiss stone to run their opponents out of stones and seal their victory, at 9-6.

After the game, Japan’s Matsumura said: “We weren’t really sure about the ice and the weight at the start of the competition, and we struggled with that but as we played the games we are getting better with that. That’s why we are doing well now.”

Another win for the Kiwis

New Zealand faced Estonia in the fifth game of this session.

The Estonians had built a 3-0 lead in the first two ends but in the third, New Zealand’s Courtney Smith drew her final stone onto backing behind the button to score four points and take the lead.

Estonia responded with a score of two points in the fourth end for a 5-4 lead at the break.

New Zealand opened the second half with a score of one point in the fifth end, then two single-point steals in the sixth and seventh ends for a 7-5 lead.

Then in the eighth end, Estonia’s attempted final stone raise went wrong, scoring only one point, New Zealand won, by 7-6.