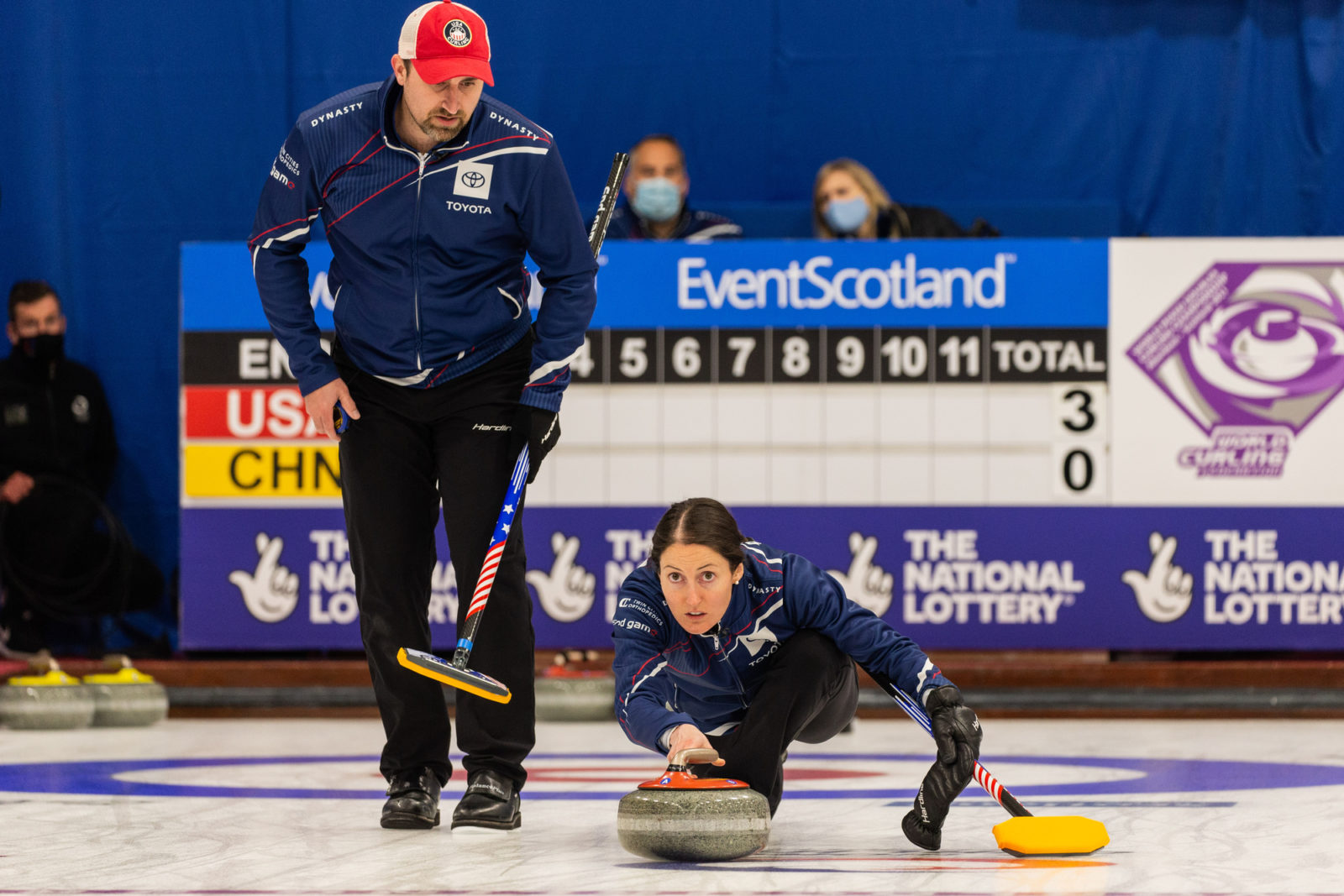 Norway and United States both had quick six-end wins in Monday evening’s opening round-robin session for Group B at the World Mixed Doubles Curling Championship 2021, being staged in a COVID-secure “bubble” in Curl Aberdeen, Scotland.

United States were facing China and opened the scoring in the first end when their male player, Joe Polo, hit out a China stone to take three points.

They followed that with steals in both the second and third ends to extend their lead to 6-0.

China used their power play to get back into the game, scoring three points in the fourth end to go into the break down by 3-6.

Four more points for United States in the fifth end and a further single-point steal in the sixth end were enough to persuade China to concede, at 11-3.

Afterwards, United States’ Polo said, “It’s nice to start off with a win. We feel we’re in a good place, so we’re pretty happy with that.”

Norway played New Zealand in this session. In the fourth end of the game, with Norway already 6-1 ahead, New Zealand’s Courtney Smith’s draw could not disturb scoring stones already in the house, giving Norway a steal of one point for a 7-1 lead.

Norway went on to celebrate their national day with a 10-1 win in just six ends. Afterwards, their male player Magnus Nedregotten said, “We’ve waited a long time for this – fifteen months since our last international competition. We managed to catch the speed quite fast – that was a good start.”

Defending champions Sweden also opened their campaign in this session, against Finland.

The Finns opened the scoring with one point in the first end, but Sweden responded with a score of two points in the second end and steal of three points in the third end.

In the seventh end, with Sweden leading by 8-2, an umpire’s measure gave Finland two points. They then conceded, with the final score at 8-4 to Sweden.

“That was a fun win,” said Sweden’s Almida De Val. “It’s nice to be back on the ice and playing competition again. We made a lot of good shots there, we found the ice very quickly, the ice is good – fast and very swingy. Now, we’re going to play our best all week and we’ll see how far up it takes us.”

Switzerland hold on for the win

Switzerland were up against England in this session and the Swiss led by 6-5 as the teams played the eighth end. With the last stone of the game, Switzerland’s Jenny Perret tapped out an English stone, to score two points and seal an 8-5 win.

In the fifth game of the session, Japan played Estonia.

In the first end, Estonia’s Marie Turmann played a draw inside two Japan stones already sitting in the house, to open the scoring with one point.  In the second end, Turmann produced a double take-out on Japan stones that led to Estonia stealing one point and extending their lead to 2-0.

In the fifth end with Estonia leading by 6-0, Japan’s Yurika Yoshida played a final draw to score three points, which would be their only points of the game.

Estonia went on to win by 10-3. Afterwards, Turmann said, “Everything worked out for us — we had quite a good game and quite a consistent draw weight for most of the game, so that got us into a good way.”