Scotland, Canada and Italy qualify for the World Mixed Doubles play-offs and earn their places in Beijing 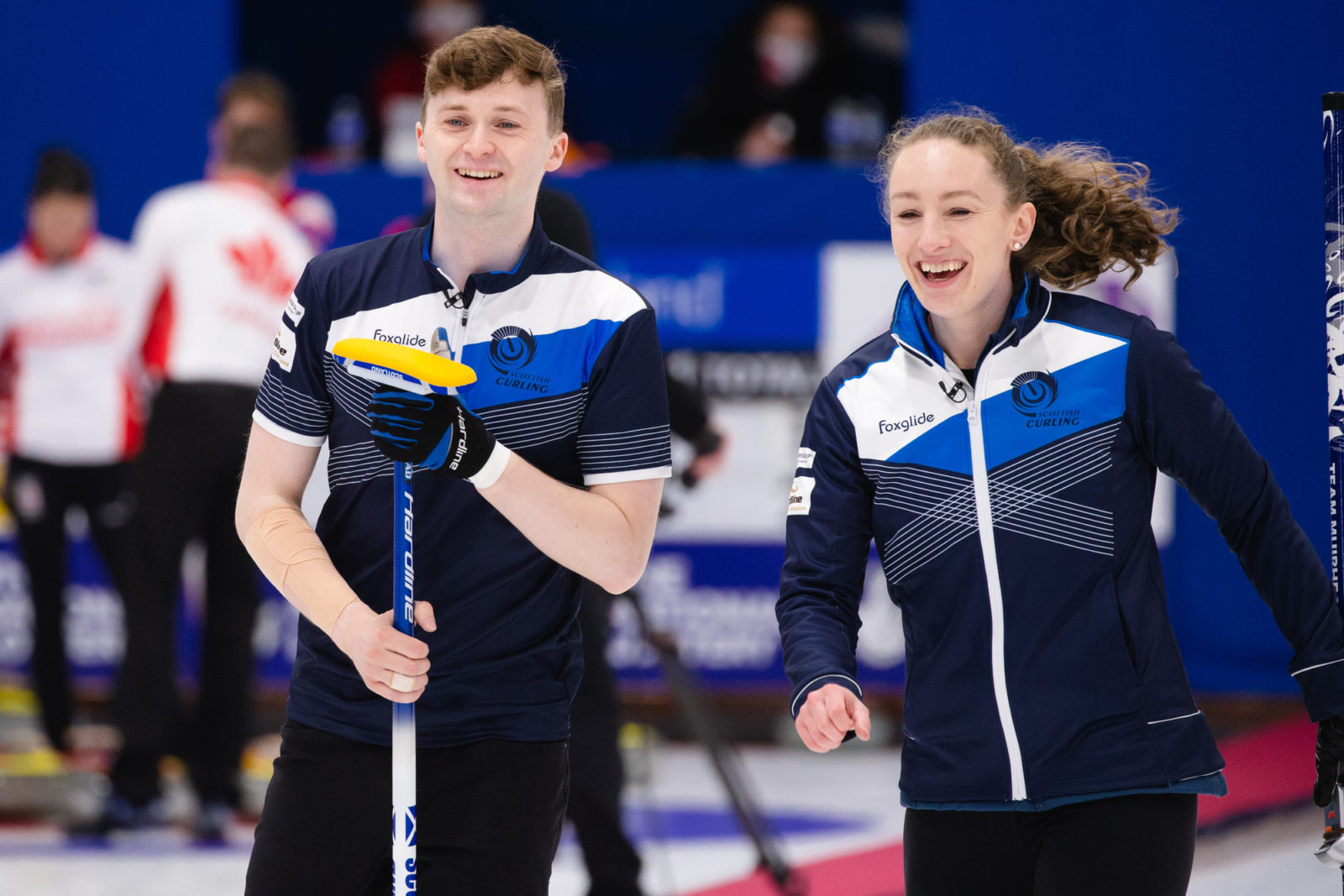 Home / News / Scotland, Canada and Italy qualify for the World Mixed Doubles play-offs and earn their places in Beijing

Scotland’s six-end 9-1 win over Korea in Friday afternoon’s second-last Group A round-robin session guaranteed them top spot in the Group and the also the direct route to the semi-finals. This win also secured a place for Great Britain in the Beijing 2022 Olympic Winter Games mixed doubles event.

Canada and Italy also won in this session to earn their National Olympic Committees a place in Beijing, and they will now go onto Saturday morning’s qualification play-off games.

Scotland started strongly against Korea, opening with a score of three points and followed that with steals in the next two ends to take an early 7-0 lead.

After this, the Scots were 8-1 ahead in the sixth end when Korea’s Ji Yoon Kim’s stone hit but rolled out to give the Scots a steal of one point. Korea then conceded with the score at 9-1.

Afterwards, Jennifer Dodds said: “Qualification is always one of the main aims and getting straight to the semi-finals is a bonus.”

Speaking about their performance Bruce Mouat added: “We’re playing well and we’re pretty confident. We were fortunate that we had a good game against Canada and then another good game there against Korea. It doesn’t matter who you’re against, you’ve still got to play well if you’re going to win.”

Canada were 4-1 up at the halfway point in their game against the Czech Republic.

The Czechs then decided to use their power play in the fifth end and scored four points with a nose-hit by Zuzana Paulova, to take a 5-4 lead.

Canada scored two points in the sixth end to re-take the lead, at 6-5.

Then, in the seventh end, the Czechs were unfortunate to only score one point, when an angle-raise by Zuzana Paulova just failed to move a Canadian stone enough to give them a multiple point score.

Canada then sealed their 7-6 win with a single point in the eighth end when Paulova could not remove a Canadian counter with her last stone.

This result was enough to confirm Canada’s place in the qualification play-offs as well as the Beijing Olympic Winter Games.

After this win, Canada’s Brad Gushue said: “I think the key for us was coming back with two in six and that really allowed us to keep control.”  Then speaking about qualifying Canada for the Olympic Winter Games, he added: “You try not to think about it, but obviously it’s still there. Now that it’s done and it’s over with, it’s something we don’t have to worry about from here on.”

Italy claim their place in Beijing and the play-off stage

Italy faced RCF and in the second end, when Stefania Constantini hit out a RCF stone, scored four points for a 4-2 lead and control of the game.

Eventually, RCF ran out of stones in the eighth end to give Italy an 8-5 win. When all the other games had finished it was confirmed that the Italians, like Canada, had qualified for the play-offs in this event and also for the Olympic Winter Games.

Speaking before he was absolutely sure of his qualification, Italy’s Amos Mosaner said, “With a lot of teams close to each other, that was an important win for us.”

Australia and Germany faced each other in this session, and, in the sixth end, with the Australians leading by 4-2, Germany’s Pia-Lisa Schoell played a nose-hit to score three points and take a 5-4 lead.

In the eighth end, Australia couldn’t disturb two German stones that were in scoring positions and these two points gave Germany a 10-4 win to keep their chances of a place in the Olympic Qualification game over the weekend alive.

The fifth game of the session saw Hungary play Spain and in the fourth end, Dorottya Palancsa played a well-judged draw to score three points and take a 7-1 lead.

Hungary then went on to win by 8-4, leaving Spain still looking for their first win and relegated to next season’s qualification event.