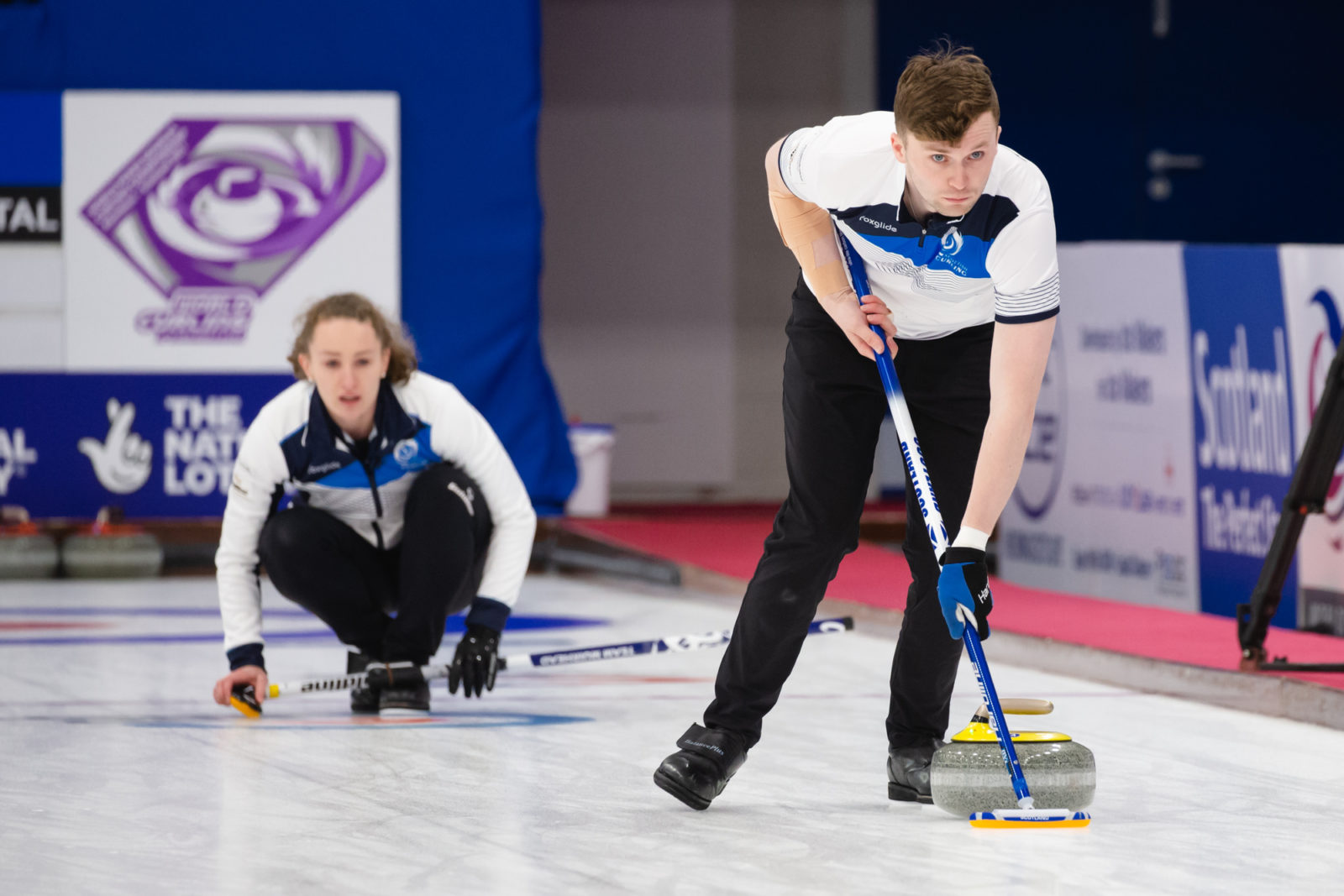 Scotland beat Canada by 8-5 in Thursday (20 May) evening’s round-robin session, to move into a clear lead at the top of Group A, and within striking distance of play-off qualification.

The Scots started strongly and in the first end, Jennifer Dodds had a straightforward draw into the house to open the scoring with three points.

In the fourth end, with Scotland leading by 4-2, Dodds produced a well-judged draw to score two more points and move onto a 6-2 lead.

Then, in the eighth end, Scotland’s Bruce Mouat cleared out three Canadian stones to run Canada out of stones and claim an 8-5 win.

After this win, Scotland’s Bruce Mouat said: “Getting hammer is key in this kind of game. We knew it was going to be a battle. To get the hammer and to score three at the start is huge — it’s kind of scary when you’re up in a mixed doubles game, but we managed to hold it out.”

This result moves Scotland into first place in the group rankings, while Canada drop to second place alongside Italy.

Italians move up the rankings

Italy faced the Czech Republic and won a tight game by 5-4.

In this game, Italy opened with a score of two points in the first end and then a single-point steal in the second end.

Although Czech Republic levelled the game, at 4-4, after seven ends with a single-point steal, Italy scored one point in the eighth end for their win.

Until the eighth end of their game against RCF, Spain looked like they were going to win their first game of the week.

The Spaniards went into that eighth end with a 7-4 lead, but RCF players piled stone after stone into the house. Despite their best effort, Spain could not remove them allowing RCF to score the four points they needed for an 8-7 win.

Germany kept themselves in play-off contention with a 9-3 win over Korea, their fourth win so far.

They opened with a score of three points in the first end and then had a single-point steal in the second end. Germany went on to steal three more points in the third end for an early 7-0 lead on the way to their victory.

“That was an important win for us,” said Germany’s Pia-Lisa Schoell. “We had a really good start and played well. It keeps us alive, so it was good, but  we need more wins tomorrow.  That was a good performance tonight, we played really well in the first few ends and we kept it going after that.”

In the fifth game of this session, Australia played Hungary.

Despite giving up a steal of two points in the first end, Australians fought back, scoring four points in the sixth end for a 9-3 scoreline, at which point Hungary conceded the game.

This Australian duo were semi-finalists in 2019 whereas this year they are now in a relegation battle.

Dean Hewitt recognised their changed circumstances this time round, saying: “It’s a different motivation this year and it’s always important to try to avoid that relegation. You want to stay in that top group and not drop down, because being in that B group is going to be tough. We’re still fighting in every game. We want to win every game no matter what position we’re in – if it’s first, last, we’re still trying to win and play our best.”