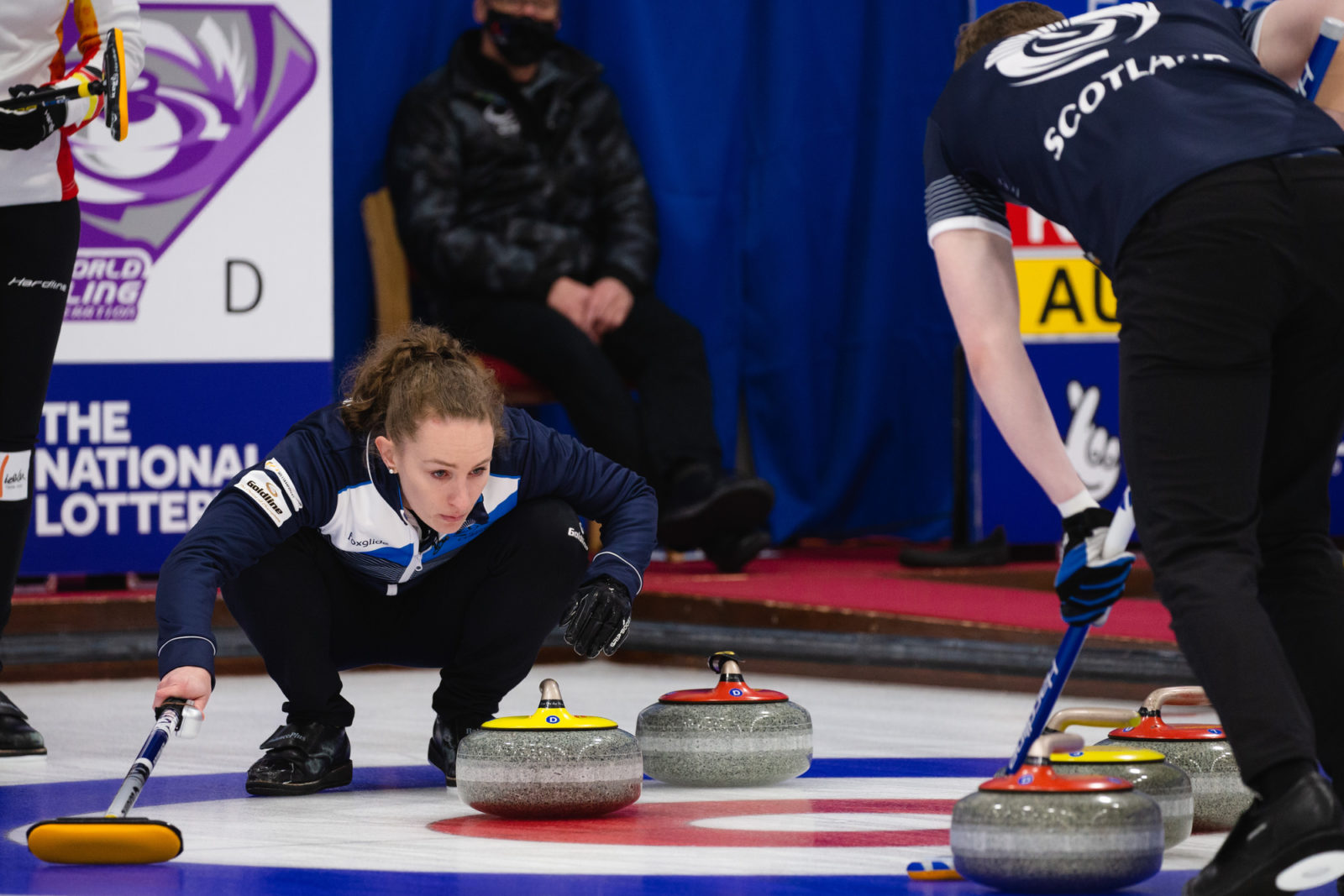 Wins for Canada and Scotland in Thursday (20 May) afternoon’s sixth Group A round-robin session kept both these teams tied at the top of the qualification rankings.

Scotland were up against Germany in this session and led 4-1 at the fourth end break.

In the fifth end, Germany’s Pia-Lisa Schoell then scored three points with a well-judged draw to level the game at 4-4.

Later, in the eighth end, Scotland’s Jennifer Dodds played a nose-hit on a German stone to score one point and win the game, by 7-5.

Canada faced Italy in this session and in the fourth end, Canada’s Kerri Einarson’s attempted raise did not have the right angle. This mistake gave Italy a steal of one point and a 3-1 lead.

The game was tied at 4-4 as the teams played the eighth end and, when Italy’s Stefania Constantini missed on a double take-out attempt, Canada scored two points for a 6-4 win.

Afterwards, Einarson said, “There are no easy games here! They are making shots and putting pressure on us, and we’re having to do the same thing. They were just so close here – they were perfect through the first four ends, so we just kept up the process and put the pressure on them. But we’re feeling really good, I’ve got my draw weight and I’m feeling really confident out there.”

Canada and Scotland now play each other in the next session, a match-up that will go a long way to deciding who will top the rankings later.

Czech Republic emerged as 7-3 winners in their game against Spain, leaving the Spaniards still searching for their first win.

A 4-1 lead at the fourth end break put Czech Republic in control of the game before running Spain out of stones in the eighth end.

“That was a very important win,” said Zuzana Paulova afterwards. “The competition is so open, we’re keeping our heads up and hoping for the best in the rest of the games. I know there are some things we can improve, and we still have a very good chance [to qualify].”

RCF faced Hungary in this session and in the sixth end, Anastasia Moskaleva nudged her own stone into position to score one point and extend her team’s lead to 6-1.

In the seventh end Hungary’s Dorottya Palancsa played a tap-up to score one point and reduce RCF’s lead. Despite that, Hungary then conceded the game, with a final score of 6-2 to RCF.

Afterwards, RCF’s Aleksandr Eremin said. “We’ve finally found a solution about the ice and know it better now, compared to the first days. Because of this we are back on track and can keep going. Now, we need to win the rest of our games – we’re sure we can do this!”

In the fifth game of this session, Korea beat Australia by 7-6. The Koreans held a 6-1 lead by the fourth end break, and were able to hold off the Australians in the second half.