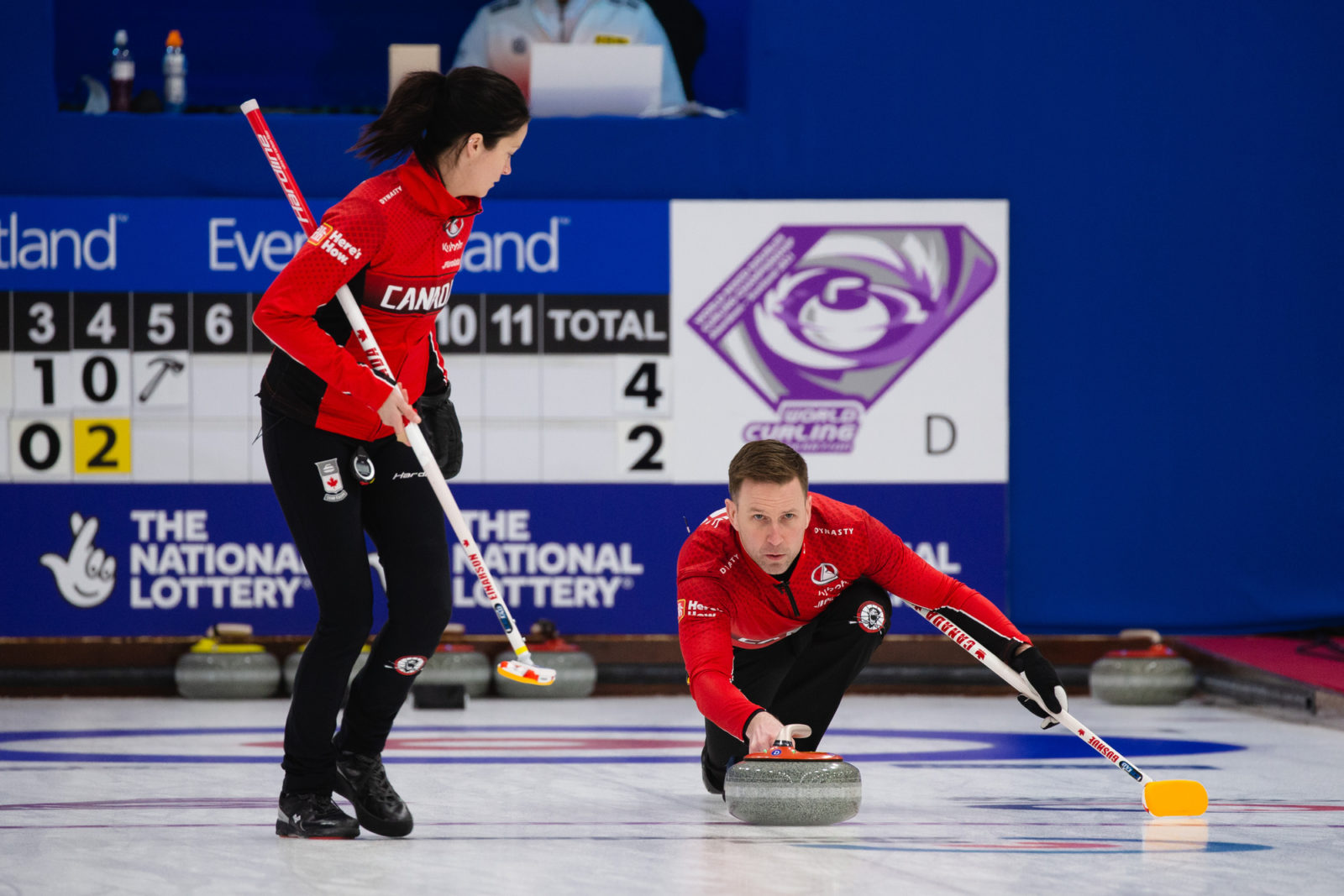 After Wednesday evening’s fifth Group A round-robin session, three teams — Canada, Italy, and Scotland — remain tied at the top of the group rankings on four wins.

Canada played Korea and led 4-3 going into the sixth end. In that end Kerri Einarson played a nose-hit on a Korean stone to score three points and increase Canada’s lead, to 7-3.

Then, in the seventh end, Korea’s Ji Yoon Kim wrecked on a front guard, giving Canada a steal of one point, after which Korea conceded to give Canada the 8-3 win.

“It definitely feels good to bounce back after a loss this morning,” said Einarson. “We made some really nice shots out there and put some pressure on them”.

Her partner Brad Gushue added: “That win was important. We have a tough day ahead of us tomorrow against two top teams, so I wanted to make sure we got this win.”

Top of the table clash

Scotland played Czech Republic, and going into the eighth end, the Scots led by 7-4.

In that end, the last stone by the Czech Republic’s Zuzana Paulova caught a Scottish guard on the way into the house, meaning that the Czechs could only score one point, to hand Scotland a 7-5 win.

The score was tied at 5-5 in the eighth end of the game between Italy and Hungary when Italy’s Stefania Constantini settled into the hack to throw her last stone. She drew that last stone onto the button to score the one point that gave Italy their second win of the day, by 6-5.

This result keeps Italy in joint top spot on the rankings and after the game, Italy’s Amos Mosaner said: “That was our second win today and it was important for the ranking. We have another four games – they’re all important now.

“We’ll keep focussed, try our best, and see what happens. Our performance isn’t the best yet but it’s at a good level and we’re always looking to improve.”

Germany bounce back with win

Germany returned to the ice after their morning defeat by Italy, facing a Spain side still looking to get their first win on the board.

Germany opened the scoring with three points in the first end. Then in the second end, Spain’s Oihane Otaegi was wide with a draw shot, to give the Germans a steal of three more points for a 6-0 lead.

Germany went on to win, by 9-2, and afterwards Klaudius Harsch said: “We needed to get back to having more wins than losses. This morning we struggled in judging the ice and adjusting to it. We talked about that and we’ve improved.”

Looking forward, he added: “We can move up the standings quite a bit tomorrow.”

Both RCF and Australia began their day by securing their first win of the week, but only one team would leave the ice with a two-win day.

While trailing 1-3 after two ends, RCF recovered by scoring five points in the third end to take a strong lead. A steal of two more points in the fourth end extended that lead to 8-3.

In the sixth end, RCF’s Anastasia Moskaleva drew her final stone onto the button to score one point and increase her team’s lead to 9-4 on their way to a 10-4 victory.

Speaking afterwards, Aleksandr Eremin said: “That was very good. We had a good win this morning over Scotland and we had good emotions after that game. We enjoyed this game against Australia too. Now we need to win all our remaining games for qualification.”