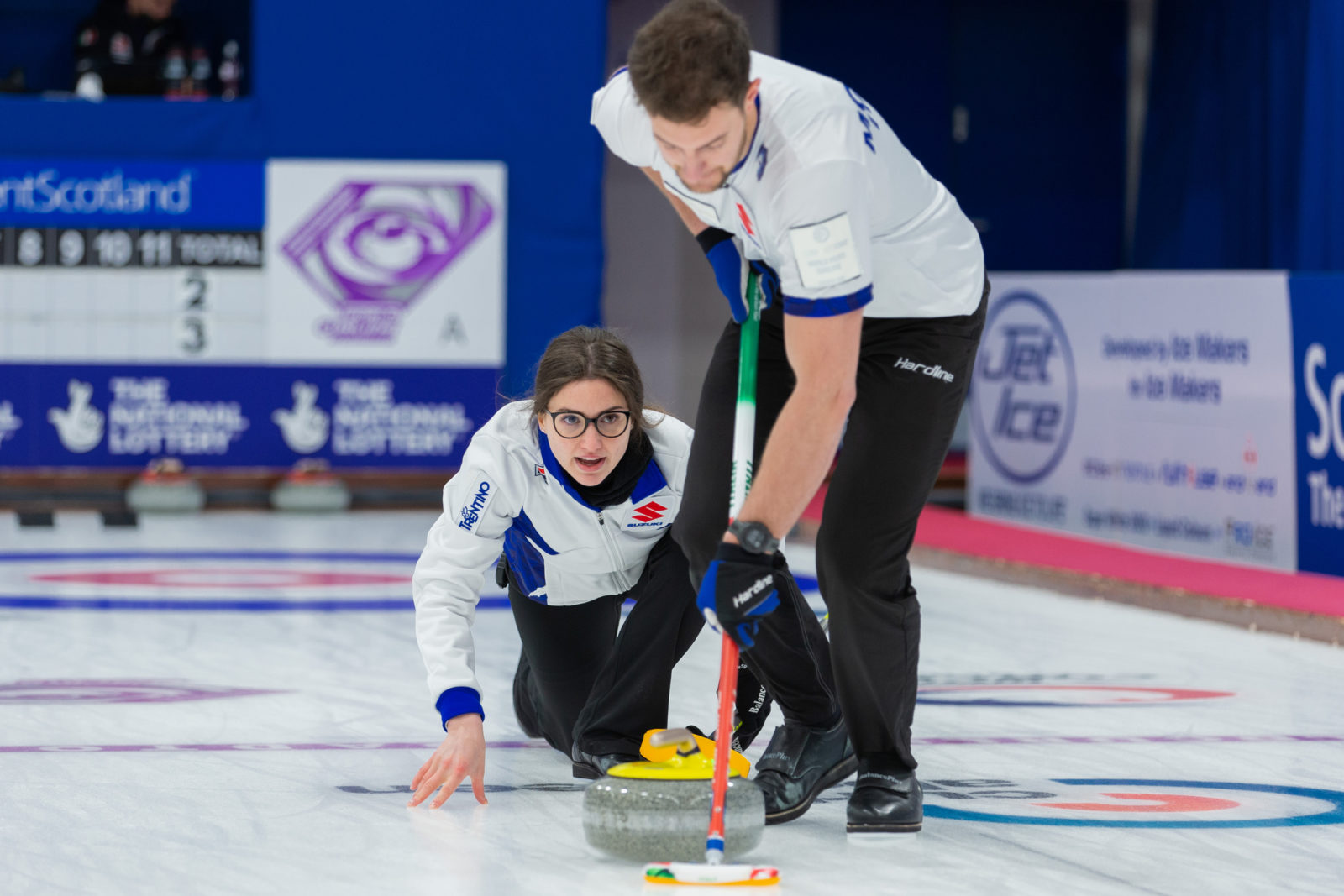 Italy beat Australia, by 7-6, in Tuesday evening’s third Group A round-robin session to follow up their morning win over Spain, completing a 100% day and kick-starting their qualification campaign.

Meanwhile, all three teams that went onto the ice for this session as joint leaders — Canada, Czech Republic and Scotland — continued their winning ways and remain unbeaten so far, tied at the top of the rankings.

In their game against Australia, Italy gave up a score of three points in the second end but went into the break tied at 3-3 thanks to a fourth-end single-point steal.

The teams were level again, at 6-6, as they played the eighth end, but Australia’s Tahli Gill was light with her final draw to give up a steal of one point that completed the 7-6 win for Italy.

Germany bounce back from morning defeat

Germany’s win was helped largely by a score of three points in the fourth end that gave them a 5-1 half-time lead. Single point steals in the fifth and sixth end were enough to secure their victory.

Afterwards, Germany’s Klaudius Harsch said: “Two out of three [wins] is pretty good. We played more like we wanted to play there, especially in the last couple of ends. We got off to a better start than in the first two games.”

Canada faced Hungary in this session. In the fourth end, Hungary’s Dorottya Palancsa attempted to tap up one of her own stones looking for shot stone. But she could not remove a Canadian counter and gave Canada a single-point steal for a 5-2 lead at the halfway break.

In the eighth end Palancsa attempted a difficult angle raise, but could not carve out the two points needed to tie the game and force an extra end, leaving Canada to win by 7-5.

After this third successive victory, Canada’s Kerri Einarson said: “I felt much more comfortable in that game and I got my rocks in some good spots which made Brad’s job a little bit easier.”

Meanwhile, Brad Gushue added: “It was much more of a textbook game. But even though we played it textbook, it’s still stressful in the last end of Mixed Doubles, so much can happen. There is no lead that is truly comfortable.”

Czech Republic played Korea in this session looking for their second win of the day.

In the second end, Czech Republic stole two points when Korea’s female player Ji Yoon Kim played a hit at the front of the house but was unable to remove Czech stones already in position.

In the eighth end the teams were tied at 5-5, when Kim was short with her final draw, giving Czech Republic a steal of two more points and the 7-5 win.

The Scots opened with a score of two points in the first end, then they had steals in the next three ends to go into the break with a 7-0 lead.

Spain got onto the scoreboard with a single point in the fifth end, but in the sixth end Scotland’s Jennifer Dodds drew her final stone into the house to score two points and secure the win, by 9-1, in just six ends.

“We’re playing well and having fun out there,” said Scotland’s Bruce Mouat. “It’s been a good start to the competition and we’re looking forward to tomorrow. We’re doing a lot of things right and if we’re doing that for the rest of the competition then we’re in a good spot.  We can sharpen up on a few areas but we’re definitely happy with how we’re playing”.