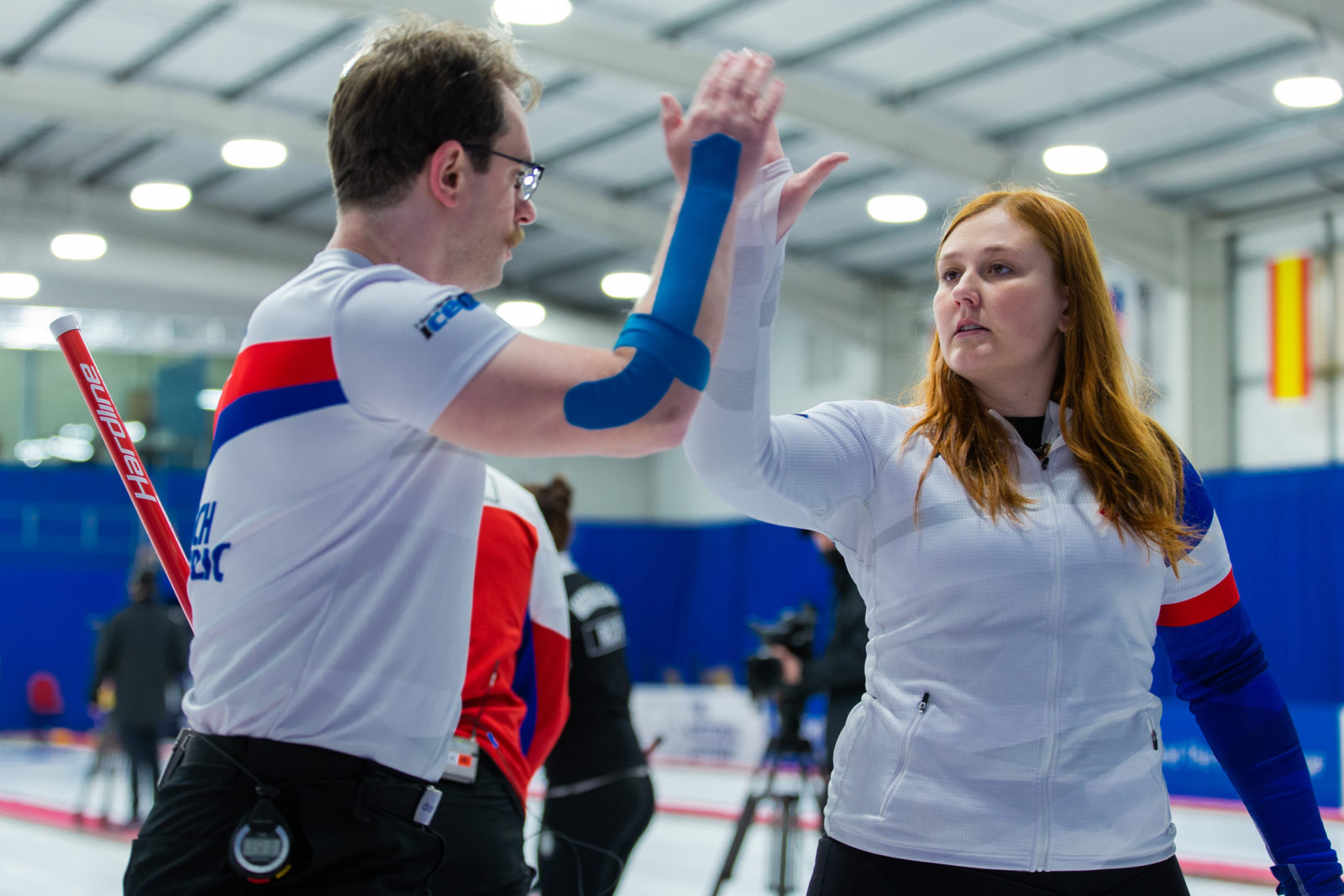 Czech Republic beat RCF in Tuesday (18 May) morning’s second Group A round-robin session, to record their second win so far, and share the group lead with Canada and Scotland, who both also won in this session.

The Czech team managed to score in each of the first five ends of this game. Following a score of one point in the opening end, with single-point steals in each of the next four ends, to build a 5-0 lead.

RCF finally got onto the scoreboard with scores of single points in ends six and seven. However, the Czech duo of Zuzana Paulova and Tomas Paul were comfortable 5-2 winners, thanks to their good performance in the first half of the game.

After the game, Paulova said, “It was an intensive game, I know it didn’t look like that according to the results, but I think the main importance was that we overplayed them in our draw weights, so we could rely on our draws, that was the key to why we won.”

Hosts make it two from two

Scotland also had a good start in their game against Australia. In the first end, Australia’s Tahli Gill made a mistake with her final stone, allowing Scotland to open the scoring with a steal of one point.

In the second end, once again Australia found themselves in trouble and, when Gill could not find a way in to scoring position with her last stone and gave the Scots a steal of three points.

Australia’s difficulties continued in the third end when Gill’s last stone hit but rolled too far, to give Scotland a further steal – this time scoring two points to move onto a 6-0 lead.

Although Australia then scored three points through a Power Play in the fourth end, the Scots maintained control, to win by 9-5.

“Yesterday felt like a long time coming, and it’s finally really great to get on the ice at a mixed doubles championship,” said Scotland’s Jennifer Dodds. “We’ve just had two really solid games there, against tough opponents. We knew that was going to be a tough game and we had to bring a good performance to it.”

Hungary draw for the win

Korea played Hungary in this session and the teams went into the eighth end tied at 4-4.

With the last stone of the game, Hungary’s Dorottya Palancsa played a well-judged and well-swept draw to get inside a Korean stone in the house and score the one point needed for a 5-4 victory.

Speaking about their last stone win, Zsolt Kiss said, “It’s always good to win on the last stone. I think it’s always good to come back from a deficit and it just feels good that we managed that. We still have some problems with the ice, it’s not easy to read, but we were comfortable with that last draw.”

Another close win for Canada

The game between Canada and Germany was a close affair.

In the fourth end, with Canada leading by 5-1, Germany produced a score of two points to reduce Canada’s lead, to 5-3.

Then, in the fifth end, Canada’s Kerri Einarson came up short with her final draw to give Germany a steal of three points which put the Germans into the lead, by 6-5.

However, in the sixth end, Einarson played a nose-hit to score two points as Canada re-took the lead, by 7-6.

Canada then saw the game out, winning by 9-6 to move into a three-way tie at the top of the group rankings with Czech Republic and Scotland.

In the fifth game of the session, Italy beat Spain by 7-2 to record their first win so far.